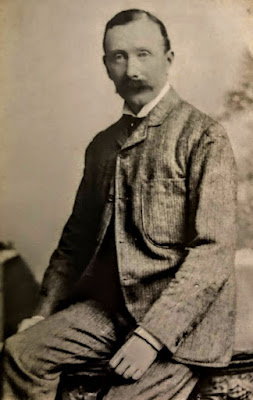 One of the presents I received this Christmas is a book I had searched for in vain in the bookshops in Limerick in recent weeks: Máire Comerford’s memoirs edited by Hilary Dully, On Dangerous Ground: A Memoir of the Irish Revolution.

This book was published a few weeks ago by Lilliput Press, and includes many of her memories, including her recollections of her branch of the Comerford family.

Máire Comerford was known as the ‘Jean d’Arc’ of Irish Republicanism and in later years she worked as a journalist with the Irish Press.

Máire grew up in Co Wicklow and Co Wexford, so I have been interested in recent days to read how she recalled her family story, and her relationship with both the Comerford and the Esmonde family.

I was particularly interested in her recollection of the Comerford family history, when she recalls:

‘Our Comerford branch came to Rathdrum from Ballinakill in County Offaly [recte County Laois]. Kilkenny, like Galway, had its ‘Tribes’; but the Catholic tribes like the Walshes and the Comerfords, were evicted from the city of Kilkenny and ordered to live in Ballinakill. All this happened a very long time before our story began in Rathdrum. In a quiet way, the Comerfords belonged to a class of Irish person who seemed relatively unaffected by the Penal Laws against Catholics; people engaged in primary industries – brewers, millers, wool merchants – who thrived relative to the many Irish people who depended for their livelihood on the land and nothing else.’

Her father, James Charles Comerford (1842-1907), of Ardavon, Rathdrum, inherited the Comerford mills in Rathdrum. He grew up as a close friend of Charles Stewart Parnell, they rode horses together, they played cricket together, and James Comerford was Parnell’s election agent.

But, she recalls, ‘My mother, Eva Esmonde, was judged to have come down in the world when she married my father. On her equally Catholic but prouder side, there was a pedigree – supplied by request from the senior Esmonde family members to the editors of Debrett, and likewise to Burke …’

She describes her family as ‘Castle Catholics’ and ‘in essence West Britons.’ There is once childhood memory of being ‘ordered to the back of the class when the Irish lesson was on. I learnt what it to be a ‘West Briton’.’

When Máire’s father, James Charles Comerford, died on 3 October 1907, there was time of arbitration in the Comerford, and eventually her widowed mother, Eva Comerford, ‘brought us back to her native Wexford.’ She was the widowed mother of four children: Mary Eva (Máire), (Colonel) Thomas James Comerford (1894-1959), Dympna Helen Mulligan (1897-1977), and Alexander E (‘Sandy’) Comerford (1900-1966), later of Malahide, Co Dublin.

There are interesting accounts too of the various houses in Co Wexford where Eva Comerford lived with her young family. But perhaps more about these houses and these family stories in later postings on this blog.