War-weary Oswestry and
its battles, saints and poets 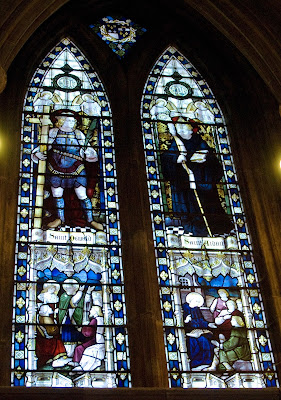 The market town of Oswestry, with a population of about 17,000, found itself at the centre of the news this week as the main town in the constituency of North Shropshire. Staying awake, waiting for the by-election results through Thursday night into the early hours of Friday morning, must – for some – have been like waiting up for ‘Portillo Moment,’ when Michael Portillo lost his seat in the general election in 1997.

Oswestry and North Shropshire have long been seen as safe for the Tories. But it has other associations with battle, loss and defeat in the story of Saint Oswald, who gives his name to the town and who has links with Lichfield Cathedral. And it has enduring links too with key church figures such as Thomas Bray and poets such as Wilfrid Owen.

Saint Oswald, who was King of Northumbria, spent many years in exile in Dal Riada. On the night before the Battle of Hatfield Chase, it is said, Oswald had a vision of Saint Columba the in which he was told, ‘Be strong and act manfully. Behold, I will be with thee. This coming night go out from your camp into battle, for the Lord has granted me that at this time your foes shall be put to flight and Cadwallon your enemy shall be delivered into your hands and you shall return victorious after battle and reign happily.’

Oswald described his vision to his advisers, and all agreed that they would be baptised and accept Christianity after the battle. After his victory, King Oswald reunited Northumbria and reigned for nine years.

Shortly after becoming king, he asked the Irish of Dál Riada to send a bishop to facilitate the conversion of his people to Christianity. The Irish sent Saint Aidan, and Oswald gave the island of Lindisfarne to Saint Aidan as his episcopal see. Bede says Oswald acted as Aidan’s interpreter because he had learned Irish during his exile.

Bede portrays Oswald as living a saintly life as king and recounts Oswald’s generosity to the poor and to strangers.

Oswald was killed in the year 642 at the Battle of Maserfield, long identified as Oswestry. According to legend, one of his dismembered arms was carried to an ash tree by a raven. Miracles were later attributed to the tree, and legend says ‘Oswald’s Tree’ gave its name to the town.

Saint Oswald’s parish in Oswestry remains a parish in the Diocese of Lichfield.

The Revd Dr Thomas Bray (1658-1730) was the founder of both the Society for the Propagation of the Gospel (SPG, now USPG, the United Society Partners in the Gospel) and the Society for Promoting Christian Knowledge (SPCK).

Thomas Bray was born into a humble Shropshire family in 1658. The Bishop of Lichfield took notice of young Thomas and felt that with his bright mind he should receive a good education. The bishop sponsored him and paid for his education at Oswestry School before he went to Oxford as a ‘poor boy.’

From 1706 until his death, he was the Rector of Saint Botolph’s Without Aldgate, London. He is commemorated on 15 February in several Churches in the Anglican Communion, including the Church of England and the Episcopal Church.
” on 12 March 1675, and graduated BA in 1678. He later received the degrees MA at Hart Hall (now Hertford College) in 1693, and BD and DD at Magdalene College, Oxford, in 1696.

Wilfred Edward Salter Owen (1893-1918) is one of the greatest war poets in English literature. Owen, who was brought up to be a deeply committed Christian and active Anglican, wrote out of his intense experiences during World War I.

Owen was born in Oswestry, Shropshire, on 18 March 1893. He was a committed Christian and became a lay assistant to the Vicar of Dunsden near Reading from 1911 to 1913, when he taught Bible classes, led prayer meetings, and assisted in pastoral visits.

Owen had moved to France, where he was working as a private tutor, when World War I broke out in 1914. Initially he was a pacifist and a conscientious objector. But he returned to England and volunteered to fight on 21 October 1915. He was sent to France on the last day of 1916, and within days was facing the horrors of the frontline.

He saw much frontline action, and was blown up, concussed and suffered shell-shock. In hospital in Edinburgh, he faced the difficulty of conflicting principles: his role as a soldier and patriot demanded one thing; his Christian faith demanded another. Knowing and believing Christ’s teaching, with absolute clarity he felt compelled to act in complete contradiction to his convictions.

There too he met Siegfried Sassoon who inspired him to develop his war poetry. He returned to the trenches in September 1918 and in October was decorated with the Military Cross for bravery in battle.

He was shot and killed near the village of Ors on 4 November 1918. Seven days later, the war was over. Church bells rang throughout the country. As they were ringing in Shrewsbury, Susan and Tom Owen received a telegram with the news of their son’s death.

All Owen’s great war poems were written in a mere 15 months. Some of his poems feature in Benjamin Britten’s War Requiem, and he is commemorated in the Poets’ Corner in Westminster Abbey.

The title of what is probably his best-known poem is taken from the first words of a Latin saying – Dulce et Decorum Est (‘It is sweet and right’) – found on an ode by Horace. The words were widely understood and often quoted at the start of World War I, and the full quotation ends his poem: ‘Dulce et decorum est pro patria mori – it is sweet and right to die for your country.’

But the title is satirical, and the poem is a strong condemnation of war, describing a mustard gas attack on a group of war-weary soldiers. Owen’s painfully direct language combines gritty realism with an aching sense of compassion. His despair at the crumbling of the moral order is expressed in phrases such as ‘froth-corrupted lungs’, ‘sores on innocent tongues’ and his description of the dying man’s face ‘like a devil’s sick of sin.’