The Meade dynasty in Victorian Dublin and
their family roots in Kilbreedy, Co Limerick 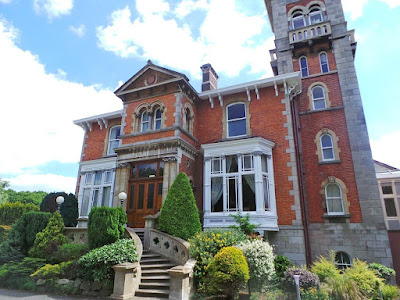 Mount Saint Michael at No 1 Ailesbury Road, Dublin, once the home of the Meade family and Saint Michael’s College

The Meade family was among of the great building contractors and housing developers in Victorian Dublin, developing many of the houses in the Ballsbridge area, and involved in work on some of the great Gothic Revival churches designed by Pugin, Ashlin and McCarthy. But the family was politically successful, despite a close encounter with the Invincibles and the murders in the Phoenix Park in 1882, and became identified in a paradoxical way with Victorian philanthropy in Dublin and as the landlords of some of the worst tenement slums in the inner city.

This Dublin ‘dynasty’ of builders, developers and politicians traces its roots to Kilcornan, near Askeaton, Co Limerick, and to Michael Meade (1814-1886), who was a prominent building contractor from the late 1840s until he died in Dublin in the mid-1880s.

Michael Meade was born ca 1813/1814 in Kilbreedy, between Stonehall and Curraghchase, about 5 km east of Askeaton, Co Limerick. He first rained as a carpenter in the Kilcornan area before moving from Co Limerick to Dublin in his early 20s. In Dublin, he built up his own business, setting up a large sawing, planing and moulding mills in premises on Great Brunswick Street, now Pearse Street.

Over three or four decades, Meade and Sons built much of the area between Ballsbridge and Merrion Square. In the 1860s, Meade began developing Ailesbury Road, where he built Shrewsbury House, later the Belgian Embassy, and Mount Saint Michael, later Saint Michael’s College.

Mount Saint Michael, on the corner of Ailesbury Road and Merrion Road, was built ca 1868 became the Meade family home. It was said to have been modelled on Osborne, Queen Victoria’s house on the Isle of Wight. 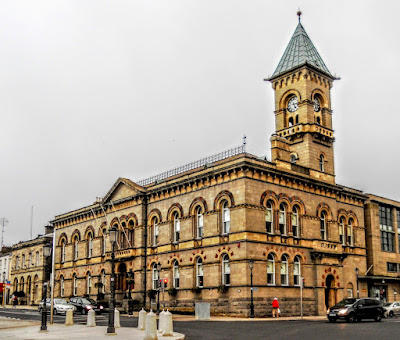 Meade had taken his son Joseph Michael Meade into partnership by 1871, and around this time Michael Meade became a Justice of the Peace for Dublin.

The Meade family also built many Roman Catholic parish churches designed by Ashlin, Pugin and McCarthy. Their church contracts included the Augustinian Church of Saint Augustine and Saint John the Baptist, popularly known as ‘John’s Lane Church’ (Pugin and Ashlin, 1862-1874), described by John Ruskin as ‘a poem in stone’, and the church at Mount Argus, Harold’s Cross (McCarthy, 1866-1878), as well as Saint Patrick’s Church, Monkstown (1861), the Church of the Sacred Heart, Donnybrook (1864) and the Church of the Annunciation, Rathfarnham (Ashlin, 1879). 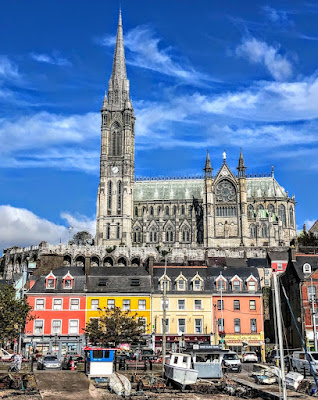 Meade’s reputation survived the potential damage caused by the Phoenix Park murders on 6 May 1882, when the Chief Secretary, Lord Frederick Cavendish, and the Under Secretary, Thomas Henry Burke, were murdered in Dublin. The murders were carried out by the ‘Invincibles,’ a dissident Republican faction founded by James Carey (1845-1893), who had been a bricklayer in Meade’s building firm for 18 years.

Michael Meade married his second wife Bridget Ashe in 1850. They were parents of four more sons:

Michael Meade died on 24 May 1886, aged 72. His second wife Bridget died on 28 July 1886, aged 65. They were buried in the family vault at Glasnevin Cemetery in Dublin, which includes an image of Saint Michael standing guard over Michael Meade and his family.

Michael Meade’s eldest son, Joseph Michael Meade (1839-1900), continued the family’s business of building contractor. He was born in 1839, was educated at Trinity College Dublin, and by 1871 he was a partner in his father’s fast-expanding business, Meade & Son. 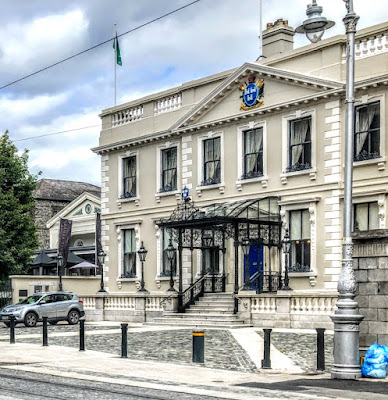 Kathleen Mary Meade was born in the Mansion House, Dublin, in 1891 when her father Joseph Meade was Lord Mayor of Dublin (Photograph: Patrick Comerford)

After his father’s death, Joseph Michael Meade continued to build up the family business until it employed about 900 men. He worked from 153-159 Great Brunswick Street from ca 1874 to ca 1883. He was one of the most significant builders in late Victorian Dublin, and his contracts included the masonry for the Loop Line railway, Bray Catholic church, the Convent of the Little Sisters of the Poor on the South Circular Road, and Guinness’s printing works.

Meade was a Parnellite Nationalist in politics. He was elected to Dublin Corporation on 25 November 1886 as the alderman for the Trinity Ward. He was High Sheriff of Dublin in 1889 and Lord Mayor of Dublin twice, in 1891 and 1892. Meade was awarded an honorary doctorate (LL.D) by Trinity College Dublin in 1892 and became a member of the Privy Council for Ireland in 1893.

Meade is credited with first putting forward the idea of inviting Queen Victoria to Ireland for a fourth visit to Ireland, which took place on 3-27 April 1900.

He was chairman of the Hibernian Bank, and a director of the London Liverpool & Globe Insurance Co, Boland’s Ltd, the Ocean Accident Guarantee Corporation and the Dublin Port and Docks Board. He was also president of the Dublin Master Builders’ Association in the 1890s.

Meade invested in tenement properties in Dublin, and when houses on Henrietta Street came on the market in the late 19th century, Meade acquired a number, with door cases and fireplace features removed from homes and sold at auction, while the physical spaces were subdivided, into tenements in which more than 70 people lived. The historian Bridget Hourican notes, ‘Nine tenement houses which he owned in Henrietta Street were then auctioned; these alone had provided him with a gross annual rental of £1,500.’

Meade was married twice. In 1870, he married his first wife, Katherine Josephine Carvill, a daughter of William Carvill of Rathgar House, Orwell Road, later the Bethany Home, and later the Orwell Lodge Nursing Home. Carvill was a builder and developer who built large parts of suburban Rathgar. In 1887, Meade married his second wife, Ada Louise Willis, a daughter of Dr Thomas Willis of Dublin.

Kate and Joseph Meade were the parents of one daughter:

Ada and Joseph Meade were the parents of four further children, three sons and a daughter: 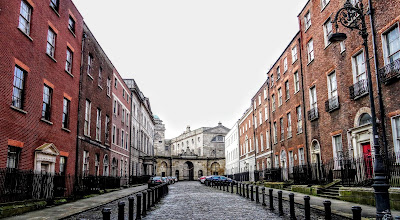 John Joseph Meade invested heavily in the tenement properties in Henrietta Street, Dublin, when they came on the market in the late 19th century (Photograph: Patrick Comerford)

Joseph Meade lived at 153 Rathgar Road ca 1874-1875, at 19 Ailesbury Road (1883), and at Mount Saint Michael, Ailesbury Road, from ca 1896 until his death. He died at home, suddenly, on 14 July 1900, three months after Queen Victoria’s final visit to Ireland, which he had promoted. He was buried three days later at Glasnevin Cemetery, close to the O’Connell Memorial he was involved in building.

At the time of his death in 1900, Meade’s property was valued at £60,000, the vast majority of it invested in his Dublin tenement homes. As one of the principal proprietors of many of the worst tenement buildings in Dublin, he was condemned in the pages of James Connolly’s The Workers’ Republic. When the master painters of the city locked out some 800 employers in a dispute with the painters' union, Meade was condemned by name in Connolly’s paper, which declared ‘here then is a crucial case for trade unionism.’

The popular image of Meade is as an exploitative tenement landlord and as a ‘slum landlord’ during the Lockout times. But he was long dead by then, and the truth is more nuanced. His obituaries noted Meade’s significant philanthropy, while one voice in an inquiry in 1914 noted that he ‘practically reconstructed these houses inside and formed them into flats and provided them generally with sanitary accommodation.’

As for Mount Saint Michael, Joseph Meade’s home at No 1 Ailesbury Road, this was a substantial property, and it had 21 rooms in 1901, when it was the home of his widow Ada. In the 1940s, the house became Saint Michael’s College, Ailesbury Road. 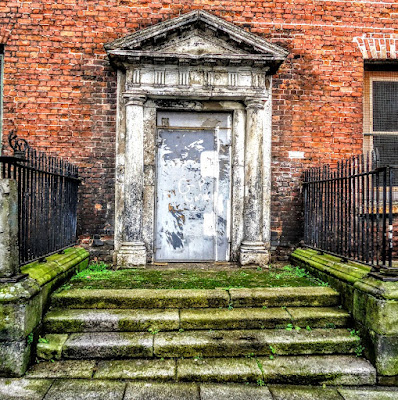 When Meade acquired a number of houses in Henrietta Street, he removed doorcases and fireplaces and sold them at auction (Photograph: Patrick Comerford)

(Revd Canon Professor) Patrick Comerford is the Church of Ireland priest-in-charge of the Rathkeale Group of Parishes, and has been living in Askeaton for the past five years.

This feature was first published in the current (2021) edition of ABC News, the annual magazine of Askeaton/Ballysteen Community Council Muinitgir na Tíre (pp 30-32), edited by Geraldine O’Brien and Teresa Wallace

Thanks for that fascinating account of the Meades, Patrick. My great grandaunt Alice McDermott was married to David Ashe Mead, Michael Meade's eldest son by his second marriage.