Searching for more family
links in Co Clare, and finding
another link with Dylan Thomas 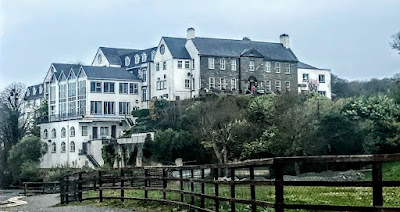 The Falls Hotel in Ennistymon … once the family home of the Macnamara family, who laid out the streets of Enistymon, Co Clare (Photograph: Patrick Comerford)

In my search last weekend for some more Comerford houses and graves in Co Galway and Co Clare last weekend, I came across some distant but interesting links between the Comerfords of Kinvara and Kilfenora with the Comyn and Macnamara families of Co Clare, and stories that link the Macnamara family with Dylan Thomas, one of the greatest poets of the 20th century.

So I started looking for the links with the Macnamara family, and came across stories about the origins of the Falls Hotel in Ennistymon, gold and silver salvaged from the Spanish Armada, and the writer from Co Clare who married the poet Dylan Thomas. 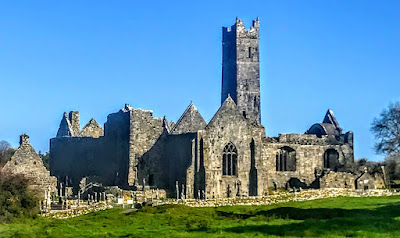 The Macnamara family is among the oldest families in Co Clare and they presided at the inauguration of the O’Brien Kings of Thomond. The Macnamara territory once included almost all that part of Co Clare east of the River Fergus and south of a line from Ruan to the Shannon. Those Macnamara chiefs were Lords of Clancullen, they founded Quin Abbey for the Franciscan friars, and in 1580 the family had no fewer than 42 castles in Co Clare.

The Macnamaras of Doolin and Ennistymon arrived in North Clare in the mid-17th century, when Teige Macnamara of Ballynacraggy settled in Drumcreehy (Ballyvaughan) in 1659. He married Ann Nugent and Teige and Ann were the parents of seven sons.

Their youngest son, Bartholomew Macnamara (1685-1761), was the ancestor of the Macnamaras of Doolin and Ennistymon. He married Dorothy Brock, daughter of a Mayor of Galway, and their youngest child, Ann, married Laurence Comyn of Kilcorney.

Bartholomew Macnamara was buried in the old church of Rathbourney, near Ballyvaughan. His eldest son, William Macnamara (1714-1762), married Catherine Sarsfield of Doolin, and so the Sarsfield estate eventually passed to the Macnamara family. After William Macnamara died in 1762, his widow Catherine married her second husband, Nicholas Comyn of Kilcorney, ca 1772, continuing the links with the Comyn family.

Dorothy, the youngest daughter of William and Catherine Macnamara, married her cousin David Comyn JP of Kilcorney and afterwards of Bishop’s Quarter. Their son, Peter Comyn of Scotland Lodge, New Quay, caused a political storm when he was hanged at Ennis in 1830 for burning down his house following a dispute with his landlord, Bindon Scott of Cahercon.

Francis Macnamara, the eldest son of William Macnamara and Catherine (Sarsfield), was born in Doolin in 1750. In 1774, Francis married Jane Stamer of Carnelly House, Clarecastle, grand-daughter of Christopher O’Brien of Ennistymon. Jane is said to have ruled over her husband and family with an iron fist. They built Doolin House, but in 1806 moved to Wellpark, near Galway, where he died in 1821.

Sir Burton Macnamara, the seventh son, had a distinguished career in the Royal Navy. He took part in the Great Lakes campaign in Canada in 1812, and was present in the Ionian islands during the Greek War of Independence in the 1820s. He was a knighted in 1839. Later, he was appointed a vice-admiral, and then a full admiral of the reserve list. In the 1850s, Sir Burton bought a 732-acre estate at Tromora, near Miltown Malbay, and was a popular landlord. He married Jane Gabbett of Limerick, but they had no children.

Three weeks before his death, he had been appointed Deputy Lieutenant for Co Clare in succession to his nephew, Colonel Francis Macnamara who had died earlier that year. Sir Burton died at Merrion Square, Dublin, on 12 December 1876. 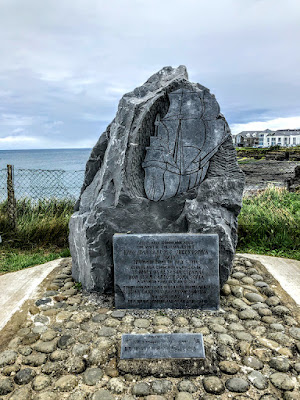 Sir Burton’s brother, Francis Macnamara, was given a farm at Glasha by his father and a sum of £1,000 when he married Marcella O’Flaherty from Aran. Francis and Marcella built a house at Glasha that they named Aran View. Aran View House is now a Georgian country house hotel in Doolin run by the Linnane family.

Marcella is said to have inherited fine gold and silver ornaments salvaged from a wreck of the Spanish Armada. When she died in 1856, they were inherited by her daughter Catherine Macnamara, wife of Robert Johnson JP, who married into Aran View. After Catherine’s death in 1867 the objects passed once more to her daughter – another Marcella – who married Henry Comerford’s grandson, Francis Blake-Foster of Ballykeale House near Kilfenora.

Major William Nugent Macnamara (1775-1856) was the eldest son and heir of Francis Macnamara and Jane Stamer. It was said, ‘He is a Protestant in religion a Catholic in politics, and a Milesian in descent.’ He was born at Doolin and educated at Trinity College Dublin.

Major Macnamara was a major in the Clare militia, a justice of the peace (JP) and in 1799 High Sheriff of Co Clare. He became something of a national figure after Daniel O’Connell selected him as his second in his duel with John d’Esterre in 1816. He was elected MP for Co Clare in 1830 and sat as a Liberal MP for 17 years.

He married Susannah Finucane, daughter and co-heiress of Judge Matthias Finucane (1737-1814) of Lifford House, Ennis, in 1779. Susannah’s mother, Ann O’Brien, was the only daughter of Edward O’Brien of Ennistymon House, and Ennistymon House passed to the Finucane family and later to William Nugent Macnamara’s son, Colonel Francis Macnamara, in 1843.

Major William Nugent Macnamara died in 1856 at the age of 81. His funeral in Doolin was described as the largest ever seen in Co Clare and extended for two miles.

Colonel Francis Macnamara (1802-1873), the major’s only son, was MP for Ennis (1832-1835), and High Sheriff of Co Clare (1839). When he married Helen Mc Dermott, the daughter of a Dublin solicitor, in 1860, he was 58 and she was 35. They moved into Ennistymon House in 1863 and made it their family home. He also carried out an ambitious building scheme in Ennistymon, laying out the streetscape that largely survives to this day.

The Macnamara estate extended to 15,000 acres in 1876, including large swathes of North Clare, some property near Ennis, 16 acres near Galway, and houses in Dublin, Galway, Ennis and Doolin. Francis Macnamara died in London on 26 June 1873.

Colonel Macnamara’s eldest son, Henry Valentine (Henry ‘Vee’) Macnamara (1861-1925), was educated at Harrow and Trinity College Cambridge (BA 1882). He was a justice of the peace (JP) and High Sheriff of Clare (1885). In 1883, Henry Vee married Edith Elizabeth Cooper, an Englishwoman of Australian descent who was described as ‘a formidable and capable woman who knew her rights and exercised them.’

Henry Vee lived at the height of the ‘Land War.’ In the ‘Doolin Cattle Drive’ on 22 September 1908, about 400 people watched as cattle and sheep were driven off his estate and through the streets of Lisdoonvarna. Later, 40 people appeared in court in Ennistymon.

During the War of Independence, Henry Vee and some friends were ambushed near Leamaneh Castle by the IRA in December 1919. During the Irish Civil War, a letter was sent Henry Vee on 27 April 1922, telling him he was a ‘marked man’ and ordering him to leave Ennistymon House. Doolin House, still used as a Macnamara family holiday home, was burned down.

Henry Vee left, never to return to Ennistymon House. He died in London on 30 October 1925. By then, Ennistymon House had become a temporary barracks for the Garda Siochána. 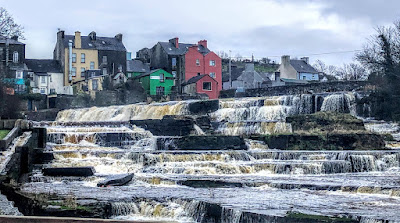 Henry Vee Macnamara was the father of three sons and four daughters. Francis Macnamara (1884-1946), the eldest son, was educated at Harrow and Magdalen College, Oxford. In London, he was friends with Augustus John, George Bernard Shaw and WB Yeats, and published a book of poems. In 1907, he married Yvonne Majolier (20), the daughter of a French father and an Irish mother from Co Limerick. They spent part of their honeymoon at Doolin and at Coole Park with Lady Gregory and WB Yeats.

They were the parents of a son, John, and three daughters, Nicolette, Brigit and Caitlin, and Francis was also the father of another daughter named Katherine Patricia (‘Pat’), who was part of the family all her life.

Francis owned a converted Galway hooker, Mary Anne, and is said to have sailed from Doolin to Greece with some of Augustus John’s family as crew. After 10 years of marriage, he left Yvonne and their children for Augustus John’s sister-in-law, Edie Mac Neil, and they were married in 1928.

Francis recovered Ennistymon House in the 1930s, and began to convert it into the Falls Hotel, named after the nearby cascades on the Inagh River. This project was interrupted by Edie’s death, but by 1935 Francis had married his third wife, Geraldine Iris O’Callaghan (22), daughter of Colonel George O’Callaghan-Westropp (1864-1944), a woman less than half his age.

Within a few years, Francis had given up his plans for the Falls Hotel. He moved to a small house in the grounds, and leased the hotel to the O’Regan family, parents of Brendan O’Regan, later identified with Shannon Airport and Duty Free. Francis Macnamara then moved to Dublin, finally living at Sorrento Terrace, Dalkey. He died in Dalkey on 8 March 1946.

Francis Macnamara’s eldest son, Major John Macnamara (1908-1962), married Henriette Buffard, a French woman, and they had no children. After World War II, they moved to the US, where John worked as a civil engineer until Henriette’s death in 1962. He returned to England and died within a month. With his death, the Macnamaras of Doolin and Ennistymon became extinct in the male line.

Nicolette Macnamara (1911-1987) was the eldest of Francis Macnamara’s daughters. She painted under the name Nicolette Macnamara and also wrote six books. In 1931, she married Anthony Devas, who died in 1958. Seven years later, Nicolette married the widowed Rupert Sheppard, Professor of Fine Art in Cape Town University.

Brigit Macnamara (1912-1994) was the second of Francis Macnamara’s daughters. She has been described by friends as ‘a little eccentric,’ and changed her name by deed poll from Macnamara to Marnier. Brigit, who never married, was the mother of two sons, Tobias and Edward. She died in August 1994, just days after her younger sister Caitlin.

Caitlin Macnamara (1913-1994) was the third of Francis Macnamara’s daughters. Caitlin married the Welsh poet Dylan Thomas in Penzance in 1937. They later settled at Laugharne in Carmarthenshire in the ‘Boat House’ overlooking the estuary. This was their home until Dylan Thomas died in New York in 1953 at the age of 39.

Four years after Dylan’s death, Caitlin and their children moved to Rome. There she met Giuseppe Fazio, a Sicilian, in 1957. They never married, and their son Francesco was born in 1963. They moved from Rome to Sicily and lived in a house in Catania owned by Giuseppe’s mother. Their relationship lasted four decades until they died. When Caitlin died in July 1994 at the age of 80, she was brought back to Wales and buried beside Dylan in Laugharne.

After visiting the Comerford, Blake-Forster and Comyn family graves, I returned through Lisdoonvarna to Ennistymon to see the Falls Hotel and the Cascades once again, stopped for coffee in Lahinch, and then watched the sunset at the pier in Fintramore, the ancestral home of Henry Comerford near Spanish Point and Milltown Malbay.

Sunset at the pier in Fintramore, the ancestral home of Henry Comerford near Spanish Point and Milltown Malbay, Co Clare (Photograph: Patrick Comerford, 2022)