Praying with USPG and the hymns of
Vaughan Williams: Thursday 4 August 2022 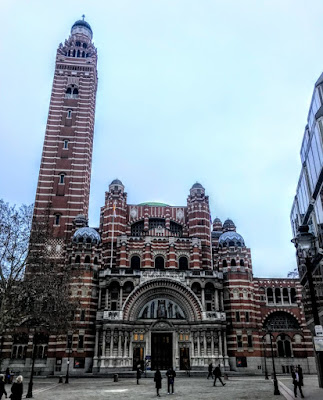 I have an appointment with my GP later today for a general check-up. But, before this becomes a busy day, I am taking some time this morning for prayer reflection.

This year marks the 150th anniversary of the composer Ralph Vaughan Williams, whose music is celebrated throughout this year’s Proms season. In my prayer diary for these weeks, I am reflecting in these ways:

The calendar of the Church of England in Common Worship today (4 August) remembers Jean-Baptiste Vianne, Curé d’Ars, Spiritual Guide (1859), with a Commemoration.

This morning I am thinking about the Mass in G minor by Vaughan Williams, which was first performed in Birmingham 100 years ago in 1922.

The Mass in G minor was written by Vaughan Williams in 1921, and is perhaps notable as the first Mass written in a distinctly English manner since the 16th century. It has been described as being ‘wondrously beautiful and wondrously sad’ at the same time, and it is often chosen as a setting for Ash Wednesday in colleges throughout England.

Vaughan Williams dedicated this piece ‘To Gustav Holst and his Whitsuntide Singers’ at Thaxted in north Essex. This group and Sir Richard Runciman Terry’s Westminster Cathedral Choir, which specialised in ‘early’ choral music, were the inspiration for the work. Vaughan Williams sent the completed Mass to Terry for comment, who was delighted by it, before its first performance.

The Mass was then first performed in the Town Hall, Birmingham, on 6 December 1922 by the City of Birmingham Choir under the direction of Joseph Lewis. Although this first performance was in a concert venue, Vaughan Williams intended the Mass to be used in a liturgical setting, and Terry directed its first liturgical performance in Westminster Cathedral on 12 March 1923.

As conductor of the Bach Choir, Vaughan Williams had acquired practical experience of the capabilities of such a group. His experience bore fruit in this Mass. The idiom he adopted unwittingly elicited the jibe ‘Back to Hucbald,’ from a critic who was referring to the tenth century music theorist.

The idiom is purposefully spiritual in the manner of great Elizabethan liturgical music, employing clearly defined imitative entries for the voices, melodic shapes derived from plainchant, and modal harmonies.

In this Mass, Vaughan Williams evokes the sonorities, polyphony and choral textures of the great Tudor composers, including Tallis and Taverner. It is a rich and mystical work, but the composer does not abandon the suggestions of English folksong and parallel harmonies that are typical of his style.

Some commentators have noted how the disposition of voices – four soloists plus two antiphonal bodies of performers – is akin to that used for the strings in the Tallis Fantasia, revised by Vaughan Williams at this time.

The Mass in G minor was written for an unaccompanied double choir and four soloists, and is divided into five movements:

The fourth movement is the most notable, for the ongoing structure of Sanctus – Hosanna I, Benedictus – Hosanna II, but also for the impressionistic undulations of the pianissimo opening, which are reminiscent of the beginning of Vaughan Williams’s Pastoral Symphony which had its first performance in January 1922, between this Mass being written and receiving its first performance. 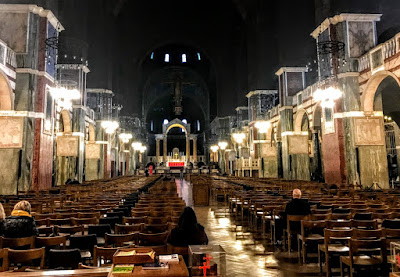 We pray for the Anglican community in Russia. May we remember those who do not support the Russian conflict and who are being persecuted and imprisoned for their views.