Sheffield Hebrew Congregation, or the Great Synagogue, was at North Church Street from 1872 until 1930 (Photograph: Patrick Comerford, 2022)

I was in Sheffield, England’s fifth largest city, this week for a consultation at the Royal Sheffield Hospital, and it is interesting this Friday evening to think about the history of the Jewish community in Sheffield and the city’s synagogues.

The United Synagogue Sheffield at the Kingfield Centre on Psalter Lane is a small but active Jewish community based in. It is a mainstream Orthodox community, with its synagogue and centre sharing the same building that forms the principal focus for community life.

Although Jewish travellers and journeymen visited Sheffield from the 1650s to buy silverware and cutlery, the evidence for the Jewish presence in Sheffield dates only from 1786.

The first Jews to live in Sheffield were Isaac and Philip Bright from Biarritz (1786), Jacob Gehrwin (1787) and Abraham Gershon (1797). The Bright family in particular were important. They were connected by marriage to many of the leading Jewish families of the day and their children and immediate family formed the bulk of Sheffield Jewry for the next 20 years or more. The Jacobs family are said said to have maintained a synagogue in their own home in the 1820s and to have employed a shochet.

Leases had been signed on two Jewish cemeteries by 1831, one for a small communal cemetery, the other for a private family plot for the Bright family. Eleven years later, a room for prayer was being rented, but Solomon Myer had his own shochet and held a minyan in his home. He also supplied meat to the few Jews in Leeds.

From the 19th century, Sheffield had several synagogues, including those at Figtree Lane, North Church Street, Campo Lane, Wilson Road and later at Psalter Lane.

Figtree Lane Synagogue opened on Figtree Lane in 1848 and remained there until 1872 (Photograph: Patrick Comerford, 2022)

The congregation moved to the Figtree Lane Synagogue at Synagogue Chambers, Figtree Lane, in 1848 and remained there until 1872. The building was previously a private school, known as Cowley’s Academy. It was rented from Town Trust, converted into a synagogue, and then bought for £350 in 1851. The synagogue was closed for three months in 1859 and was then re-consecrated.

The congregation moved to the North Church Street Synagogue in 1872. The foundation stone was laid on 4 January 1872 by the Revd AA Green and the synagogue was consecrated on 10 September 1872 by the Chief Rabbi, Dr Nathan Marcus Adler (1803-1890).

The surviving inscription in Hebrew on the pediment quotes I Kings 8: 33: ‘When your people Israel, having sinned against you, are defeated before an enemy but turn again to you, confess your name, pray, and plead with you in this house.’

The surviving inscription in Hebrew on the pediment of the former synagogue at North Church Street (Photograph: Patrick Comerford, 2022)

Many of Sheffield’s Jews had prospered and become involved in local politics and wider community affairs. Many were prominent too in the local cutlery and silverware industries. The more recent immigrants lived in the Scotland Street and West Bar districts, an area of cheap housing. They tended to work as glaziers, travelling drapers and small shopkeepers.

By 1914, the religious needs of local Jews were met by two congregations, each with its own place of worship. Sheffield was also developing: the city was awarded its charter and Sir Marcus Samuel (1853-1927), later Lord Bearsted, laid the foundation stone of the new university, which began to accommodate Jewish students.

In the inter-war years, Sheffield Jewry created a strong framework of communal organisations, many of which still exist today.

Sheffield Hebrew Congregation, or the Great Synagogue, remained at North Church Street until 1930. The congregation decided to buy a site on Wilson Road in Ecclesall in 1928 to build a new synagogue to accommodate the large numbers who had moved away from declining inner city areas. The foundation stone and cornerstones of the new synagogue were laid on in 1929, and the synagogue was opened by Lionel N de Rothschild on 3 April 1930, and was consecrated by the Chief Rabbi, Dr Joseph Herman Hertz (1872-1946).

Sheffield Central Synagogue stood at the corner of Lee Croft and Campo Lane from 1914, and was destroyed by German bombing in 1940 (Photograph: Patrick Comerford, 2022)

The new group became Sheffield New Hebrew Congregation, and was initially at Solley Street and then at 47 West Bar Green – over a pork butcher’s shop or between two pork butchers’ shops – before moving to Hallamshire Hall at 93-99 West Bar from about 1891 until about 1914.

The Yanashker Synagogue, founded about 1896, met at the top of Scotland Street. However, this congregation was very short-lived, and when it closed the majority of its former members joined Sheffield New Hebrew Congregation.

The synagogue at the corner of Campo Lane and Lee Croft was destroyed by German bombing during the Blitz on 12 December 1940, and the congregation moved into temporary premises at 93 Brunswick Street.

After prolonged discussions, a new communal centre and synagogue opened in 1956. This building formed the basis of the Kingfield Hall complex.

The Jewish community in Sheffield reached its zenith in the 1950s, with about 1,500 members. Young men who returned from the war had established themselves in the city and many refugees had settled in Sheffield. Enterprising businessmen expanded their businesses into national chains and the demand for new homes helped the growth of local Jewish-owned furniture, glass and plumbing and general household goods businesses.

However, the picture changed dramatically within a decade. Traditional trades and businesses were on the decline due to foreign competition; intermarriage was on the increase; and attitudes were changing. Young people were leaving the city and membership started to fall.

The 970-seat WiIson Road Synagogue was no longer practical by the late 1990s. A new modern synagogue was built at Psalter Lane, next to Kingfield Hall, and opened in January 2000. The Chief Rabbi, the late Lord (Jonathan) Sacks, consecrated the new synagogue on 19 March 2000. 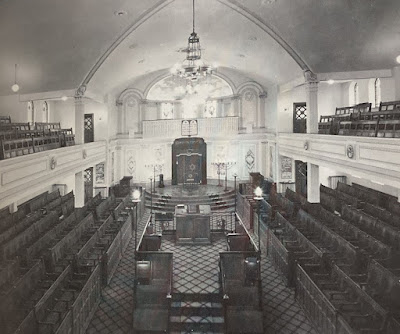 Inside the former Wilson Road Synagogue in Sheffield

Although an independent congregation, the congregation accepts the authority of the Chief Rabbi and his Beth Din in matters of Halacha or Jewish law.

Despite the small numbers, this beautiful new building and the leadership of Rabbi Yonoson Golomb encourage the community to share enthusiasm and confidence to carry Sheffield Jewry into the future.

A second strand of Judaism in Sheffield belongs to a Reform community started in 1989.

Sheffield and District Reform Jewish Congregation was formed from a nucleus of members of Sinai Synagogue in Leeds living in the Sheffield area. They were assisted by Rabbi Walter Rothschild, then the Rabbi at Sinai Synagogue, Leeds.

The congregation is affiliated to the Movement for Reform Judaism (MRJ), and generally follows its pattern of services. These Services are held about three times a month and on festivals throughout the year. There are informal socials too, ‘bring and share dinners’ and Jewish learning sessions.

Precise figures are hard to find, but membership of the Orthodox community (SJCC) now stands at around 300 and the Reform Community has 50 to 60 members.

Meanwhile, the deconsecrated synagogue on Wilson Road was bought for £200,000 in December 1999 by City Church Sheffield, which had its roots in the Baptist Church. 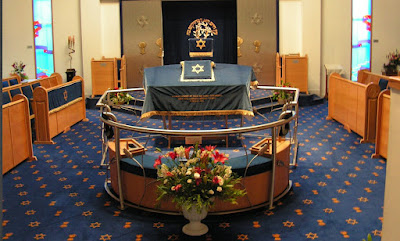 Inside the United Synagogue, Sheffield