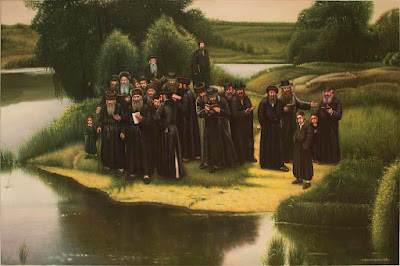 ‘Tashlich Prayer on Vistula River’, a painting by Eduard Gurevich

Rosh Hashanah, marking the beginning of the New Year in the Jewish calendar, begins at sunset this evening [Sunday 25 September 2022].

Rosh Hashanah is the first of the High Holidays or ‘Days of Awe’, ending 10 days later with Yom Kippur, from sunset on 4 October to nightfall on 5 October.

The two-day festival beginning this evening marks the anniversary of the creation of humanity and the special relationship we have between humans and God our creator.

Rosh Hashanah begins with the sounding of the shofar or ram’s horn, proclaiming God as King of the Universe. The sound of the shofar is also a call to repentance, to wake up and re-examine our commitment to God and to correct our ways.

Rosh Hashanah falls on the first two days of Tishrei, the seventh month of the Hebrew calendar, and this year continues until nightfall on Tuesday [27 September].

Ripening pomegranates on a tree in Platanias near Rethymnon … pomegranates are traditionally associated with Rosh Hashanah (Photograph: Patrick Comerford, 2021)

The traditional greeting on Rosh Hashanah is Shana Tova (שנה טובה‎), ‘A Good Year.’ During these Ten Days of Reprentance (עֲשֶׂרֶת יְמֵי תְּשׁוּבָה‎, Aseret Yemei Teshuva), it is traditional to say, G’mar Chatimah Tovah (גמר חתימה טובה‎) or ‘may you be inscribed in the Book of Life.’

The word Teshuva means ‘return.’ The time between Rosh Hashanah and Yom Kippur is a reminder to acknowledge our wrongs and to ‘return’ to being our best selves through good deeds, kindness, prayer and honest repentance.

The Tashlich ceremony (תשליך‎ ‘cast off’) on the afternoon of the first day of Rosh Hashanah involves visiting a body of fresh water to symbolically cast past sins away, tossing pebbles or bread crumbs into flowing water. During this ritual, people think of things they have done wrong in the past year and then ‘throw them away,’ promising for improvement in the coming year. I ask each and every one for forgiveness.

If you have felt wronged or upset by me or by something you felt I did or did not do, I apologise.

The Tashlich ceremony on the afternoon of the first day of Rosh Hashanah involves symbolically casting past sins away, tossing pebbles or bread crumbs into flowing water (Photograph: Patrick Comerford)

Today, most mainstream Jewish movements accept Tashlich, although it is generally not practised by Spanish and Portuguese Jews. However, as my reading for Rosh Hashanah this evening I am reading a poem by the American Sephardic poet Emma Lazarus (1849-1887), ‘The New Year, Rosh-Hashanah, 5643.’

Emma Lazarus was born into a large Sephardic family. Her Lazarus and Nathan ancestors were originally from Portugal and lived in New York long before the American Revolution. They were among the original 23 Portuguese Jews who arrived in New Amsterdam fleeing the Inquisition in Recife, Brazil.

The New Year, by Emma Lazarus

Not while the snow-shroud round dead earth is rolled,
And naked branches point to frozen skies.—
When orchards burn their lamps of fiery gold,
The grape glows like a jewel, and the corn
A sea of beauty and abundance lies,
Then the new year is born.

Look where the mother of the months uplifts
In the green clearness of the unsunned West,
Her ivory horn of plenty, dropping gifts,
Cool, harvest-feeding dews, fine-winnowed light;
Tired labor with fruition, joy and rest
Profusely to requite.

Blow, Israel, the sacred cornet! Call
Back to thy courts whatever faint heart throb
With thine ancestral blood, thy need craves all.
The red, dark year is dead, the year just born
Leads on from anguish wrought by priest and mob,
To what undreamed-of morn?

For never yet, since on the holy height,
The Temple’s marble walls of white and green
Carved like the sea-waves, fell, and the world’s light
Went out in darkness,—never was the year
Greater with portent and with promise seen,
Than this eve now and here.

Even as the Prophet promised, so your tent
Hath been enlarged unto earth’s farthest rim.
To snow-capped Sierras from vast steppes ye went,
Through fire and blood and tempest-tossing wave,
For freedom to proclaim and worship Him,
Mighty to slay and save.

High above flood and fire ye held the scroll,
Out of the depths ye published still the Word.
No bodily pang had power to swerve your soul:
Ye, in a cynic age of crumbling faiths,
Lived to bear witness to the living Lord,
Or died a thousand deaths.

In two divided streams the exiles part,
One rolling homeward to its ancient source,
One rushing sunward with fresh will, new heart.
By each the truth is spread, the law unfurled,
Each separate soul contains the nation’s force,
And both embrace the world.

Kindle the silver candle’s seven rays,
Offer the first fruits of the clustered bowers,
The garnered spoil of bees. With prayer and praise
Rejoice that once more tried, once more we prove
How strength of supreme suffering still is ours
For Truth and Law and Love. 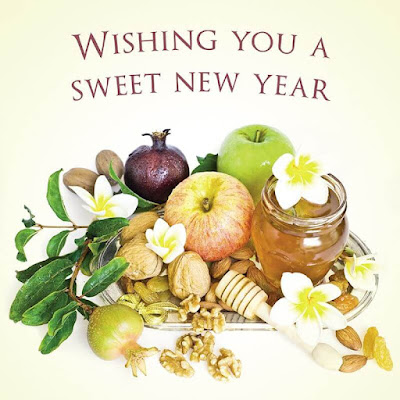