As I was wandering around Oxford almost aimlessly earlier this month, I stumbled unexpectedly upon a plaque to Noel Chavasse that reminded me of the connections between a distinguished Oxford clerical family and a family with an interesting role in life in Ireland.

Captain Noel Godfrey Chavasse (1884 -1917) was a medical doctor, an Olympic athlete, a war hero, and one of only three people to be awarded the Victoria Cross twice – indeed, the only man to be awarded the VC twice during World War I.

During the Battle of Guillemont in 1916, he was hit by shell splinters while rescuing men in no-man’s land, but continued in his heroic throughout the night under a constant rain of sniper bullets and bombing. He carried similar heroic acts at Passchendaele in 1917, becoming the most highly decorated British officer in World War I, although he died of his wounds on 4 August 1917.

Noel Chavasse was the younger of identical twin sons of the Rev Francis Chavasse, later Bishop of Liverpool and founder of Saint Peter's College, Oxford. His twin brother, the Revd Christopher Maude Chavasse (1884-1962), was also an Olympic athlete, was decorated with the Military Cross (MC) during World War I, and later became Bishop of Rochester.

Christopher and Noel Chavasse were born at Saint Peter-le-Bailey Rectory on New Inn Hall Street, Oxford, where their father was Rector. They both attended Magdalen College School in Oxford, followed by Liverpool College, before going on to Trinity College Oxford.

During his medical training, Noel Chavase had a placement at the Rotunda Hospital in Dublin. He is commemorated by more war memorials in the United Kingdom than any other individual: 16 have currently recorded by the National Inventory of War Memorials, including two paving stones in Oxford, each depicting a pair of crosses: one outside Saint Peter’s College and one near Magdalen College School.

The twin’s father, Francis James Chavasse (1846-1928), was the Rector of Saint Peter-le-Bailey in Oxford when they were born at the Rectory. Later, after being Principal of Wycliffe Hall, Oxford, and Bishop of Liverpool, Bishop Chavasse returned to Oxford in 1923, and moved back into the vacant rectory of Saint Peter-le-Bailey on New Inn Hall Street.

Claude Chavasse (1886-1971), who was just two years younger than the twins, was also born in Oxford and was one of the Irish nationalists rounded up in the aftermath of the Easter Rising in 1916.

Brendan Behan is said to have based the character ‘Monsewer’ in The Hostage on Claude Chavasse.

Claude first came to the attention of the authorities when he was stopped by a police sergeant in Co Cork in February 1916 and gave his name in Irish. He was arrested and spent two nights in prison in Macroom, where he alleged he was beaten for refusing to speak English.

He was arrested again after the Easter Rising and took part in a hunger strike in the prison. He took the Republican side in the civil war, taught at Scoil Acla on Achill Island, and remained active in the Irish language movement until his death in 1971. His sister Marguerite also attended Scoil Acla and through her friendship with the Trench family persuaded Switzer’s in Dublin to sell Achill knitting produce.

I remember him from my childhood in Co Waterford, when he was an innovative farmer, a founder member of the Irish Farmers’ Association and was involved in West Waterford Hunt and the Dungarvan Show. He was the longest-serving lay reader in the Church of Ireland and a member of the General Synod.

His son, Henry Perceval Kendal (Hal) Chavasse (1933-2022) of Cappagh House, between Cappoquin and Dungarvan, was once the British military attaché in Mexico and Panama, and then in Columbia. When he retired and returned to west Waterford, he was the forestry manager at Lismore Castle and a farmer, and for many years he was the treasurer and ‘the voice’ of the annual Dungarvan Show. He died earlier this year on 21 February 2022. 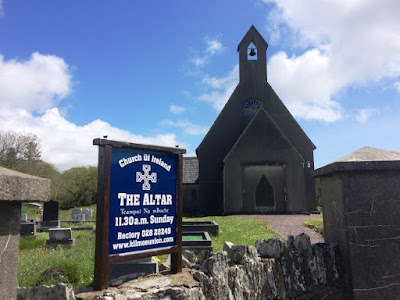 Teampol na mBocht or the Church of the Poor, at Altar or Toormore, west of Schull, Co Cork … Canon Claude Lionel Chavasse was rector in 1934-1940 (Photograph: Patrick Comerford)

I have fond memories of his daughter, Judith Mary Chavasse (1933-2018), who was an encouraging parishioner in Saint George’s Church, Balbriggan, when I did regular Sunday duty in the Holmpatrick and Balbriggan Group of Parishes.

She trained as a nurse at Saint Thomas’s in London, and returned to Ireland, becoming head of nursing in University College Dublin. Judith was a visionary and a great thinker. She led the development of nursing towards its recognition as a profession and academic discipline in Ireland, and was awarded an honorary doctorate by TCD.

After her retirement in 1996, she moved to Balbriggan, where was an active parishioner in Saint George’s, securing heritage grants for its restoration.

Earlier this year, a special service on 19 June 2022 marked the opening of the Judith Chavasse Centre – formerly Saint George’s School – in Hampton Street, Balbriggan. The guest preacher was a former parishioner, the Revd Trevor Sargent, now Rector of Bunclody, Co Wexford and a trustee of the Anglican mission agency USPG.