The Irish Times view on Christmas:
seeking light in the darkness 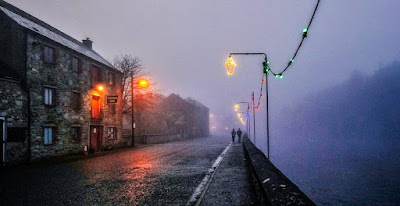 He’s making a list,
And checking it twice;
Gonna find out who’s naughty and nice.
Santa Claus is comin’ to town

The most successful Christmas song ever, Santa Claus is Comin’ to Town, was written by Fred Coots and Haven Gillespie for Christmas 1934, at the height of the Great Depression. Since it was first heard on Eddie Cantor’s show, the song has been a hit for innumerable artists, from Bing Crosbie, the Andrews Sisters and Frank Sinatra to the Jackson Five, Slade, Barry Manilow, Bruce Springsteen and Michael Bublé. Recent recordings have kept the words about being “naughty and nice” but have dropped some of the lines in Cantor’s original performance, including verses no longer heard encouraging people to be charitable at Christmas and to help the less fortunate.

Christmas Eve marks the end of the Church season of Advent. When Christmas Day falls on a Sunday, Advent is as long as possible, lasting for a full four weeks. It is a season of waiting and longing, preparation and anticipation, turning to hope from despair, seeking light in the darkness, longing for peace in a troubled, war-torn and impoverished world.

The English hymn-writer and Catholic social activist Bernadette Farrell brings those Advent themes together in her hymn Christ Be Our Light, one of the most popular hymns in all churches in recent decades:

Her hymn is a practical yet challenging reminder to carol-lovers and hymn-singers in the run-up to Christmas that in preparing for the incarnation, the coming of God among humanity, the Church must be concerned with the reality of the world into which Christ comes and the relevance of the circumstances:

Longing for peace, our world is troubled.
Longing for hope, many despair …
Make us your living voice.

The song was first written in 1994, 60 years after Santa Claus is Comin’ to Town. But it has become more relevant as an Advent song in recent years, calling on the Church to respond to poverty and homelessness, refugees and asylum seekers, to address the humanitarian crises created by climate change, to speak out against prejudice, hatred and war.

For Christians, Advent is a time of preparing not just for the coming of Christ as a vulnerable child at Christmas, but for the second coming of Christ, with the anticipation and hope of justice for all creation and the condemnation of all that has sought to destroy life and creation.

If Santa Claus is making a list and checking it twice, then the naughty list this year must be headed by climate-change deniers; by all who ignore refugees caught on the high seas or held in inhumane conditions; by Donald Trump, who shows no signs of remorse or repentance for four corrupt years as he seeks to run for office again; and - perhaps at the very top of the list – Vladimir Putin: for the war he has waged on Ukraine; for attacks on civilians in flagrant war crimes; for creating hundreds of thousands of refugees; for striking fear into the hearts of people across Europe in a way unknown since the Cold War. The despair of the world today could easily be transposed to become the setting for the first Christmas, when the Christ Child is born in a bleak, harsh climate to an impoverished family on the move and about to become refugees, harried and pursued by a cruel and capricious dictator.

Christmas ought to be a time for the churches to come together with one voice to proclaim the message of peace brought by the Christ Child into a broken and fear-filled world. A sad consequence of the war in Ukraine is that the Churches in Ukraine and Russia cannot proclaim that message of peace together. Patriarch Kirill of Moscow has blessed and sanctified Russia’s war and is Putin’s greatest champion. Indeed, Christmas is celebrated on different days in Ukraine and Russia.

Christmas is about to dawn on a world where, in Bernadette Farrell’s hymn, “longing for shelter, many are homeless, longing for warmth, many are cold.” The churches and churchgoers this Christmas could take to heart her closing words: ‘Let us be servants to one another, making your kingdom come.’

This full-length editorial is published in The Irish Times on Christmas Eve, 24 December 2022