Christmas Poems (16): On Christmas Day to My Heart by Clement Paman

Snow in Cloister Court, Sidney Sussex College, Cambridge ... Clement Paman was a student here in the 1620s and 1630s

This second last day of the year, 30 December, has no other name, number or commemoration in the calendar, apart from being the “sixth day of Christmas” when my true love sent to me “six geese a-laying.” But even by today, most people fail to get that far in this Christmas song, if they ever remembered that many lines.

And so, for my Christmas poem this morning I have chosen ‘On Christmas Day to My Heart,’ a poem written around 1660 or 1661 by Clement Paman (ca 1612-1664) and was first published in Dublin in 1663. Paman and his poetry are largely forgotten today – forgotten more than today’s ‘six geese a-laying’ may be. But I have chosen him because of his links with the Caroline Divines, with the Church of Ireland and with Sidney Sussex, College, Cambridge, where I have stayed regularly during the last four years.

This poem is difficult, almost turgid, to read today, with a now-awkward reference to stretching tight by turning a screw, especially to increase the tension or pitch of a musical instrument by winding up the screws or keys:

Today,
Then, screw thee high,
My heart, up to
The angels’ cry;
Sing ‘glory’, do

The reference is so awkward that it needed a footnotes in the programme for the Service of Nine Lessons and Carols at King’s College, Cambridge, in 1999. Yet this poem also contains these memorably beautiful lines:

As a poet, Paman is sometimes associated with the “Cavalier Poets,” who include Ben Jonson, Robert Herrick and Thomas Carew, and he has been described as “perhaps the most talented poet of the 17th century never to have had a poem published over his name.”

The Pamans appear to have been well-off, untitled Suffolk gentry, and Clement Paman was born in Chevington, Suffolk, in 1610 or 1611. His name is sometimes spelled Payman in Church of Ireland records. The Paman family is listed in the parish registers of Chevington, and his father, Robert Paman, probably lived at Dunstall Green in Dalham. He may have been related to the physicist, Henry Paman of Saint John’s College, who was at Cambridge at the same time.

Clement Paman was educated at Lavenham School and Bury School. Atv the age of 16, he was admitted on 16 February 1628 to Sidney Sussex College, which at first had been a Puritan foundation. Earlier students at Sidney Sussex included Oliver Cromwell, who left in 1617 without taking a degree, and Edward Montagu, 2nd Earl of Manchester, who graduated in 1622 and who was a key commander of the Parliamentary forces in the English Civil War.

But Paman was not unusual among Sidney Sussex students for his political and religious views: John Bramhall, who had been there ahead of Cromwell, became the Archbishop of Armagh at the Caroline Restoration.

At Sidney Sussex, Paman was a student of Samuel Ward (1572-1643), Lady Margaret Professor of Divinity at Cambridge. Ward began life as a moderate Calvinist, but as a loyal Anglican he suffered persecution during the Civil War. When Ward died after being imprisoned in Saint John’s College, he was buried in the chapel in Sidney Sussex.

Paman obtained his BA in 1632, his MA in 1635 and later became a Doctor of Divinity at Cambridge University, and received the degree DD ad eundem at Trinity College Dublin in 1661. One of his earliest works is a tribute written after the death of a young Irish poet who was his contemporary in Cambridge: ‘Poem on the Death of Edward King.’ King, who was also the subject of John Milton’s ‘Lycidas,’ was born in Ireland in 1612, and was admitted to Christ’s College, Cambridge, in 1626. Four years later, he was elected a fellow in 1632, and he intended to proceed to ordination. But his career was cut short by the tragedy that inspired Paman’s and Milton’s poems. In 1637, he set out for Ireland to visit his family, but on 10 August the ship struck a rock off the Welsh coast, and King was drowned.

Some sources say Paman first came to Ireland along with John Bramhall as the chaplain to the Lord Deputy, Thomas Wentworth, 1st Earl of Strafford. But this detail is confusing as Strafford was Lord Deputy from 1632 to 1639, while Paman was still in Cambridge.

But Paman seems to have arrived in Ireland by 1640 at the latest, for David Crookes, in his Clergy of Kilmore, Elphin and Ardagh identiifes Clement Paman with Cleremont Panham, who was Rector of Saint John’s, Sligo, in 1640. However, this rectory was lost in a subsequent dispute, and he returned to England.

John Cleveland’s epitaph on the death of the Earl of Strafford, ‘Here lies Wise and Valiant Dust’ (1647), has recently been ascribed to Paman:

Here lies wise and valiant dust
Huddled up ’twixt fit and just,
Strafford, who was hurried hence
’Twixt treason and convenience.
He spent his time here in a mist,
A Papist, yet a Calvinist;
His Prince’s nearest joy and grief,
He had, yet wanted all relief;
The prop and ruin of the state;
The people’s violent love and hate;
One in extremes loved and abhorred.
Riddles lie here, or in a word –
Here lies blood; and let it lie
Speechless still and never cry.

From 1648 to 1653, Paman was Vicar of Thatcham in Berkshire, in the Diocese of Oxford. During that time, he wrote of how he was inspired by Edward Benlowes’s poetic masterpiece Theophila, or Love’s Sacrifice, a Divine Poem (1652): “All my pleasure is, yt I have obeyed you, & somewhat rays’d my owne heart wth these imaginations.”

In 1653, Paman’s right to his Berkshire vicarage was disputed. He lost the living, and remained without a church appointment until the end of the Cromwellian era and his return to Ireland in 1661. 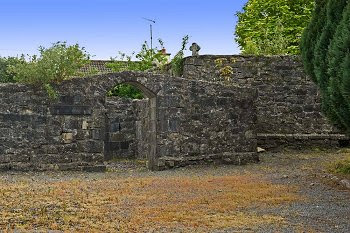 The ruins of Elphin Cathedral in Co Roscommon

Following the end of the Civil War and the Caroline Restoration, Paman was appointed Prebendary of Monmohenock in Saint Patrick’s Cathedral, Dublin, in 1661, and he was Dean of Saint Mary’s Cathedral, Elphin, in Co Roscommon, and Vicar of Saint John’s, Sligo, from 1661, and Vicar of Castledermot, Co Kildare, in the Diocese of Glendalough, from 1662 until his death in 1664.

During his time as Dean of Elphin, the cathedral – which had been destroyed during the rebellion of 1641 – was rebuilt by Bishop John Parker (1661-1667), and in the following century the poet Oliver Goldsmith (1728-1774) attended the school attached to the cathedral.

After his death, a memorial to him was erected in the chapel of Sidney Sussex College, although I have failed to find it over the past four years.

Peter Davidson, in his introduction to Poetry and Revolution, describes Paman as a “moderate Protestant.” However, in Christian Humanism and the Puritan Social Order, Margo Todd calls him an “ultra-royalist cleric.” She says his writings on Christian charity are liberal for their time, and cites his idea that alms should be given “even to the loose and impious.”

While he was Dean of Elphin, Paman published Poems by Several Hands in Dublin in 1663. However, only three of his poems were published in the 17th century and the majority of his poems remained in manuscript collections in the Bodleian Library in Oxford.

His poems are mainly of a devotional nature. Perhaps the best-known is ‘On Christmas Day to My Heart,’ a poem written ca 1660. His other poems include ‘Good Friday,’ ‘On Christmas Day 1661,’ and ‘On his death.’ He also wrote a lengthy tribute to the dramatist and poet Ben Jonson (1572-1637). Peter Davidson notes that Paman’s style is complex, “abounding in extended metaphors” and more “overly Baroque” than some of his contemporaries, being a development of the “epigrammatic style of Jonson.”

King’s College, Cambridge ... ‘On Christmas Day to My Heart’ was included in the Festival of Nine Lessons and Carols on Christmas Eve 1999 (Photograph: Patrick Comerford, 2010)

Today’s poem, ‘On Christmas Day to My Heart,’ was included in the Oxford Book of Christian Verse (1940) and in Norman Ault’s collection, A Treasury of Unfamiliar Lyrics (1938). But until the 1990s, Paman remained unknown except among those interested in the manuscript collections of 17th century poetry.

There was a renewed interest in his work with the publication of the anthology, Poetry and Revolution: An Anthology of British and Irish Verse (1998). A year later, ‘On Christmas Day to My Heart’ was set to music by Richard Rodney Bennett for the Festival of Nine Lessons and Carols in the Chapel of King’s College, Cambridge in 1999.

On Christmas Day to My Heart by Clement Paman

Today,/ A shed that’s thatched/ (Yet straws can sing)/ Holds God … the altarpiece by the Venetian painter Giovanni Pittoni in the chapel of Sidney Sussex College, Cambridge (Photograph: Patrick Comerford)

Today,
Hark! Heaven sings;
Stretch, tune, my heart!
(For hearts have strings
May bear their part)
And though thy lute were bruised i’ the fall,
Bruised hearts may reach an humble pastoral.

Today,
Shepherds rejoice,
And angels do
No more: thy voice
Can reach that too:
Bring them at least thy pipe along,
And mingle consort with the angels’ song.

Today,
A shed that’s thatched
(Yet straws can sing)
Holds God; God matched
With beasts; beasts bring
Their song their way: for shame then raise
Thy notes! lambs bleat, and oxen bellow praise.

Today,
God honoured man
Not angels: yet
They sing; and can
Raised man forget?
Praise is our debt to-day, now shall
Angels (man’s not so poor) discharge it all?

Today,
Then, screw thee high,
My heart, up to
The angels’ cry;
Sing ‘glory’, do:
What if thy strings all crack and fly?
On such a ground, music ’twill be to die.