While the music lasts and the shafts of sunlight continue 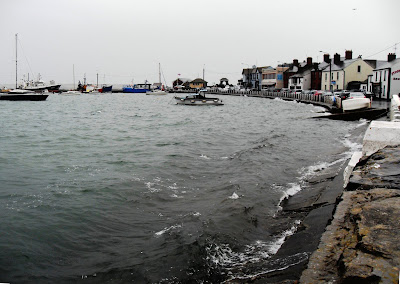 Autumn turns to winter in the Harbour in Skerries (Photograph: Patrick Comerford

Although autumn has turned to winter, bright memories of sunshine in Skerries throughout the past year and refreshing walks on the beaches are there to carry me though to Spring.

The year began bringing a group of varied group of multinational visitors to dinner in Tarragon. I was one of the facilitators at the international gathering of senior Anglican archbishops or primates in Swords. The week-long meeting behind closed doors and the presence of figures like the Archbishop of Canterbury, Dr Rowan Williams, drew little media attention until the conference was over. That evening in Tarragon was yet another opportunity to be a “show-off” about Skerries. But the darkness of winter and the cold weather combined so that only a few braved a late-night walk along the beach and up to the harbour.

As spring began to offer tantalising prospects of more sunshine, I took another group to Skerries. These students who are preparing for ordination in the Church of Ireland found a haven at Skerries Sailing Club for our Ash Wednesday retreat.

One morning later in March, as we climbed a path above Loughshinny beach and came across a hidden waterfall, I was reminded how TS Eliot, at the end of his poem Little Gidding, speaks of

The voice of the hidden waterfall
And the children in the apple-tree
Not known, because not looked for
But heard, half-heard, in the stillness
Between two waves of the sea.

In the weeks that followed, when Ronan Browne and David Gilsenan were lost at sea, the words of Eliot’s The Waste Land came to mind constantly:

Those words kept returning, again and again, as I thought of that desperate search:

April is the cruellest month … I will show you fear in a handful of dust ...

But the cruel sea and the search brought this community together, showing the people of Skerries have warm hearts and a strong, shared identity.

Summer brought less sunshine than we hoped for, but my walks on the beach continued, speckled with unexpected meetings with old friends. An effort one evening to visit Lambay Island with Eoin Grimes was foiled by high winds and high waves. But the journey was as exciting as the destination, with views of the lawns below Ardgillan Castle sweeping down to the coast in the grey shades of dusk.

As summer turned to autumn, those beach walks continued, interspersed with coffee in the Olive, a snatched occasional moment to watch cricket, and many joyful Sunday mornings taking the services in Kenure, Holmpatrick and Balbriggan.

And now, as autumn turns to winter, TS Eliot comes to mind again and his words in the Dry Salvages:

For most of us, there is only the unattended
Moment, the moment in and out of time,
The distraction fit, lost in a shaft of sunlight,
The wild thyme unseen, or the winter lightning
Or the waterfall, or music heard so deeply
That is not heard at all, but you are the music
While the music lasts.

While the music lasts, and the shafts of sunlight continue, my walks on the beaches of Skerries continue, enjoying the winter lightning and the hidden waterfalls.

This winter reflection was published in the Skerries News in November
Posted by Patrick Comerford at 18:01