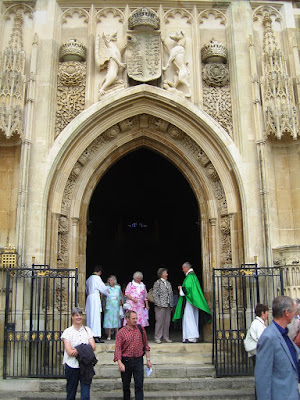 Today is the Second Sunday in Lent [4 March 2012]. My choice of a Poem for Lent this morning is ‘Sunday Morning, King’s Cambridge’ by John Betjeman.

I referred to this poem on Tuesday morning when I was discussing another poem by John Betjeman, ‘Lenten Thoughts of a High Anglican.’

Some years ago, in a book review in the Times Higher Education Supplement, Timothy Mowl of the University of Bristol described ‘Sunday Morning, King’s Cambridge’ as of the “least important” of Betjeman’s poems, “because it is about a place, not people in a place.”

But Betjeman is at his best when he fuses together in one poem his different passions, and in ‘Sunday Morning, King’s Cambridge’ he presents a happy marriage of architectural detail, finely observed, and the sense of the worship of the eternal captured in a moment.

Taken together, ‘In Westminster Abbey’ and ‘Sunday Morning, King’s Cambridge’ give us a poet who believes deeply in Christ and who holds out hope for the Church of England and Anglicanism. One represents a place of public worship the closely links the Church with the political power in the nation; the other represents the very beauty of Anglican worship in a place associated not only with the academic, architectural and musical excellence of the nation.

‘In Westminster Abbey’ is one of Betjeman’s most savage satires. It is a dramatic monologue, set during the early days of World War II, in which a woman enters Westminster Abbey to pray for a moment before hurrying off to “a luncheon date.” She is not merely a chauvinist but also a racist, a snob and a hypocrite who is concerned more with how the war will affect her share portfolio than anything else. Her chauvinistic nationalism leads her speaker to pray to God “to bomb the Germans” … but “Don’t let anyone bomb me.” Her social and ethical lapses are a product of her spiritual state, which is a direct result of a nation’s spiritual sickness.

On the other hand, in ‘Sunday Morning, King’s Cambridge,’ the moment of worship exists out of time as the living and the dead, the choir and the poet, join in the eternal praise of God. In this poem, Betjeman captures a joyful and spontaneous reaction, albeit an emotionally restrained expression, and a sense of wonder in the celebration of Anglican worship.

Stanza 1 describes the procession of the choir of the Chapel of King’s College, Cambridge, and the spiritually overwhelming aesthetics of the chapel – the stalls, the stained glass, and especially the stunning fan-vaulted ceiling, “a shower that never falls.”

Stanza 2 sees the poet’s mind wander away from the service as he imagines being outside among the “windy Cambridge courts.” Again there is a great emphasis on the vast variety of colour, but all the colours are transformed into “waves of pearly light” reflected off the Cambridge stone. The image suggests that the divine is not to be found exclusively in the chapel but in the world, the space that contains both God’s works and humanity’s work.

Stanza 3 is a geographical and historical expansion of these images and ideas. Here, the white of the “windy Cambridge courts” contrasts with the “vaulted roof so white and light and strong.”

Betjeman imagines the tombs that fill churches throughout East Anglia, with the effigies of the deceased captured for eternity in postures of prayer:

... the clasped hands lying long
Recumbent on sepulchral slabs or effigied in brass.

The prayers of these dead are a “buttress” for the vaulted ceiling of the chapel at King’s, which, built near the end of the Gothic period, needs no architectural buttresses., Christianity exists not because of aesthetics but because of prayer, and the sanctuary is supported, not because of the marvels of 15th century engineering, but by a tradition of faith. In ‘Sunday Morning, King’s Cambridge,’ the moment of worship exists out of time as the living and the dead, the choir and the poet, join in the eternal praise of God.

The poem has no irony, except perhaps in the last line:

To praise Eternity contained in Time and coloured glass.

Here Betjeman illustrates the futility of our human desire to share in God’s timelessness. All of us are being confounded by our foolish need to control God and time. It is a thought to ponder this Second Sunday in Lent as we read in the Gospel reading in the lectionary: “If any of you want to become my followers, let them deny themselves and take up their cross and follow me. For those who want to save their life will lose it, and those who lose their life for my sake, and for the sake of the gospel. will save it” (Mark 8: 34-35).

File into yellow candle light, fair choristers of King’s
Lost in the shadowy silence of canopied Renaissance stalls
In blazing glass above the dark glow skies and thrones and wings
Blue, ruby, gold and green between the whiteness of the walls
And with what rich precision the stonework soars and springs
To fountain out a spreading vault – a shower that never falls.

The white of windy Cambridge courts, the cobbles brown and dry,
The gold of plaster Gothic with ivy overgrown,
The apple-red, the silver fronts, the wide green flats and high,
The yellowing elm-trees circled out on islands of their own –
Oh, here behold all colours change that catch the flying sky
To waves of pearly light that heave along the shafted stone.

In far East Anglian churches, the clasped hands lying long
Recumbent on sepulchral slabs or effigied in brass
Buttress with prayer this vaulted roof so white and light and strong
And countless congregations as the generations pass
Join choir and great crowned organ case, in centuries of song
To praise Eternity contained in Time and coloured glass.