Christmas with Vaughan Williams (4):
‘Hodie’, 4 and 5, Narration and Choral 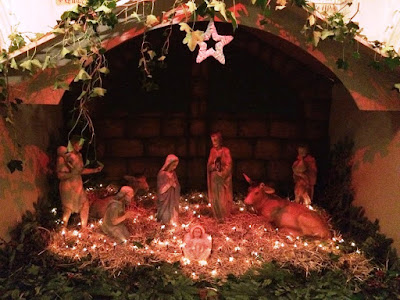 ‘And she brought forth her firstborn son, and wrapped him in swaddling clothes, and laid him in a manger’ … the Christmas Crib in the south transept chapel in Christ Church Cathedral, Dublin, this Christmas (Photograph: Patrick Comerford, 2015)

Today is the First Sunday of Christmas, and this is also the Feast Day of Saint John the Evangelist [27 December 2015]. This morning, I am preaching at the Sung Eucharist in Christ Church Cathedral, Dublin, at 11 a.m.

Over this Christmas season, I am inviting you to join me each morning in a series of Christmas meditations as I listen to the Christmas cantata Hodie (‘This Day’) by the great English composer Ralph Vaughan Williams (1872-1958), drawing on English Christmas poetry from diverse sources, including poems by John Milton, Thomas Hardy and George Herbert that reflect a variety of Christmas experiences, and the narration of the Nativity story in the Gospels.

This morning I invite you to join me in listening to the fourth and fifth movements of Hodie.

4 and 5: Narration and Choral

The fourth movement is written for this portion of the Nativity narration in Luke 2: 1–7:

And it came to pass in those days, that there went out a decree from
Caesar Augustus, that all the world should be taxed. And all went to be
taxed, every one into his own city. And Joseph also went up into the
city of David, which is called Bethlehem; to be taxed with Mary his
espoused wife, being great with child.

And so it was, that, while they were there, the days were accomplished
that she should be delivered. And she brought forth her firstborn son,
and wrapped him in swaddling clothes, and laid him in a manger; because
there was no room for them in the inn.

The Choral that follows is one of two in the cantata set for unaccompanied chorus, and uses a translation by Miles Coverdale of a hymn by Martin Luther:

The blessed son of God only
In a crib full poor did lie;
With our poor flesh and our poor blood
Was clothed that everlasting good.
Kyrie eleison.

The Lord Christ Jesu, God’s son dear,
Was a guest and a stranger here;
Us for to bring from misery,
That we might live eternally.
Kyrie eleison.

All this did he for us freely,
For to declare his great mercy;
All Christendom be merry therefore,
And give him thanks for evermore.
Kyrie eleison.