How the descendants of Dutch and
Huguenot refugees came to Askeaton 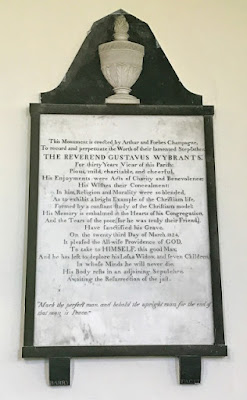 The monument to the Revd Gustavus Wybrants in Saint Mary’s Church, Askeaton, is a tribute by his stepsons Arthur and Forbes Champagné (Photograph: Patrick Comerford, 2017)

I presided and preaching at the Eucharist in Saint Mary’s Church, Askeaton, last Sunday [5 February 2017]. It was my first time in the church since my introduction to the group of parishes, and as I prepared to preside I was conscious of the reminders in the windows and the walls of some of my predecessors.

A large plaque on the south side of the chancel area recalls the life and work of the Revd Gustavus Wybrants (1758-1824). He was Vicar of Askeaton from 1790 until he died in 1824, and is buried outside in the churchyard in a railed-off family grave, close to the south-east corner of the church.

Gustavus Wybrants was the fifth son of Stephen Wybrants and his wife Alice Cane, and one of their 12 children.

The Revd Peter Wybrants was the father of Stephen Wybrants, who married Alicia Cane in 1752. They had eight children, and their fifth son was the Revd Gustavus Wybrants, who became Vicar of Askeaton and Vicar of Castlelyons.

Three years after he moved to Askeaton, Gustavus Wybrants married the widowed Mary (Homan), whose husband, Canon Arthur Champagné, had died in 1791.

Mary Champagné’s father, the Revd Philip Homan, was the curate of Rathfarnham, Dublin (1774-1789). Her first husband, Canon Arthur Champagné, was typical of late 18th century pluralists in the Church of Ireland: he was canon of both Kildare Cathedral (Prebendary of Castropetri) and of Saint Patrick’s Cathedral, Dublin (Prebendary of Monmohenock), and the incumbent of parishes in the dioceses of Dublin and Glendalough, Elphin and Derry at the same time.

Canon Arthur Champagné was born in the early 1720s at Castle Forbes, Co Longford. He was a son of the Very Revd Arthur Champagné, who was Dean of Clonmacnoise (1761-1800), and his mother, Lady Jane Forbes, was a daughter of Arthur Forbes, 2nd Earl of Granard.

Dean Champagné was the son of Josias de Robillard and Marie de la Rochefoucauld, Huguenot refugees. His family was descended from the ancient family of de Robillard, of Saintonge, in France. His immediate ancestor, Josias de Robillard, was the Seigneur de Champagné, in the parish of Torcé, in Saintonge. He left France at the revocation of the Edict of Nantes, and changed his name to Champagné. His eldest son, Josias Champagné, accompanied his father into exile, and fought at the Battle of the Boyne when he was only 17.

Soon after her first husband died, Mary (Champagné) married the Revd Gustavus Wybrants of Askearon. He was the Vicar of Askeaton from 1793 to 1824, and was also the Vicar of Castlelyons, Co Cork, in the Diocese of Cloyne, from 1796 until his death in 1824.

Mary and Gustavus Wybrants had seven children, including a son Stephen Wybrants, who died unmarried, and six daughters:

So in all, the clerical family in Askeaton at the turn of the 18th and 19th centuries was a large one, with two Champagné boys, one Wybrants boy and six Wybrants girls. Throughout all the demands of motherhood in these days, Mary Wybrants still managed to spent much of her time in Askeaton as the teacher in the free school beside Saint Mary’s Church. The school was under the patronage of the Kildare Place Society, and all 36 girls at the school were Roman Catholics.

Gustavus Wybrants died at Milltown House, near Askeaton, on 23 March 1824, and he is buried in a family vault in the churchyard at Saint Mary’s. His plaque in the church was erected by his step-sons, Arthur and Forbes Champagné.

Both stepsons had been raised as Gustavus Wybrant’s own children. The elder stepson, the Revd Arthur Champagné, was the curate of Durrow, in the Diocese of Meath, and later the Vicar of Castlelyons, Co Cork, where his stepfather had been the vicar.

Meanwhile, it is interesting to note, that Arthur Champagné had been succeeded as Dean of Clonmacnoise in 1800 by Charles Mongan Warburton, who became Bishop of Limerick in 1806, and his son, the American-born Archdeacon Charles Warburton (1781-1854), was the Rector of Rathkeale (1813-1855) at the time the Revd Gustavus Wybrants died in Askeaton. 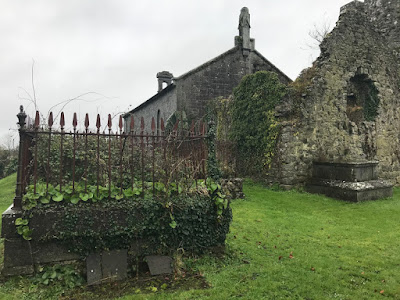 A friend in Dublin sent me your link. I was most interested in reading about Mary Champagne. And I was impressed with the information you found about her and her family. She was one of 14 children. Her brother Sir William Jackson Homan, the most well known of her siblings, eloped with Lady Charlotte Stuart, daughter of the 1st Marquess of Bute. I have posted all my Homan files on Geni.com. Do I have your permission to enter the information on Mary Champagne and her children on Geni.com? Accessing it is free and I am trying to post anything I find so that family members anywhere in the world can find the information.

Of course you are free to use any of this information Meg. It took me some time disentangle some of the details of the Champagne family tree and I am delighted to share this information, Patrick

Very interesting read.
My grandfathers great-great grandparents were Gustavas and Elizabeth Wybrants. Their daughter Augusta Fosbery ended up in Devon where my grandfathers grandmother was born (Harriet Grant, Augustas daughter) I found this through Ancestry.
I am surprised by the Dutch/Irish connection. We thought we were solely from Devon!

Olivia, I would love to correspond with you. Patrick, is there a way to give Olivia my email address? I don't want to post it here.

If Olivia and Meg send me your email addresses by private message on Facebook, I shall put you in touch with each other, Patrick

Thank you Olivia. All my files are on Geni.com. My file for Mary Wybrants (Homan) is https://www.geni.com/people/Mary-Wybrants-Homan-Champagne/6000000027970358158 I've followed some of her children, but not all. I've been able to trace her Homan lineage back to John Homan, Cromwellian officer, b. c. 1620. It's all on Geni. Message me on the Geni private messaging system if you want a Homan family tree. Meg