Prayers of thanks to celebrate
10 years of Askeaton Pool 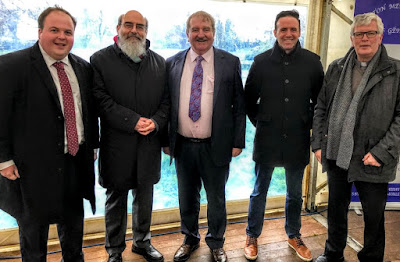 Patrick Comerford
My colleague, Father Seán Ó Longaigh, Parish Priest of Askeaton, and I were asked to say the opening prayers this afternoon at the celebrations marking the tenth anniversary of Askeaton Pool and Leisure Centre.

The pool opened ten years ago on 21 January 1998, and is a magnificent facility not only for Askeaton but for communities throughout West Limerick.

The afternoon’s events were introduced by Councillor Kevin Sheahan, Leas-Cathaoirleach of the Municipal District of Adare-Rathkeale, Councillor Adam Teskey, Tom Neville TD, and Patrick O’Donovan, TD, Minister of State at the Departments of Finance and the Department of Public Expenditure and Reform.

Representatives of other community groups in the Askeaton and west Limerick area were present, including footballers and camogie players.
Introducing my prayers, I spoke of how the themes in Epiphany-tide include the Baptism of Christ in the River Jordan, and how this is new vision of the waters of creation, when the waters separate and the Holy Spirit appears above, as God the Father pronounces how good this is.

We thank you, almighty God, for the gift of water to sustain, refresh and cleanse all life.
Over water the Holy Spirit moved in the beginning of creation.
Through water you led the children of Israel
from slavery in Egypt to freedom in the Promised Land.
In water your Son Jesus received the baptism of John
and was anointed by the Holy Spirit as the messiah, the Christ,
to lead us from the death of sin to the newness of life.