Revealing the secrets behind
the architecture of Florence

I have just been watching RTÉ 2’s broadcast of the third and final part of the series Italy’s Invisible Cities. This evening, Dr Michael Scott, Associate Professor of Classics and Ancient History at the University of Warwick, and presenter Alexander Armstrong explored the city of Florence.

In this series, Scott and Armstrong travelled through Naples, Venice and Florence to bring a fresh perspective to 2,000 years of history.

This evening they looked at the tole of the Medici banking dynasty, ‘godfathers of the Renaissance,’ in the development of Florence.

They revealed how the city’s wonderful facades and artworks mask hidden stories of intrigue and secrecy.

Their scanning team built a virtual reality 3D model to reveal how secret corridors of power were the foundation of the city’s Renaissance glory.

With the help of the historian Ross King and the scanning team, they looked at the hidden secrets of Florence’s cathedral. They showed how that the great brick dome, built in 1436 by Filippo Brunelleschi, is comprised of two domes – an outer and inner shell bound together with rings of sandstone. The secrets of this piece of architectural genius were brought to life with stunning 3D scans.

They also explored the fraught relationship of the Medici family with Michelangelo, who was like a member of the family and designed the Medici mausoleum in the Basilica di San Lorenzo.

Michelangelo fell from favour when he supported a rebellion against his own masters. In 1975, it was discovered that Michelangelo chose an unlikely place to hide from the Medicis – a secret chamber below the mausoleum he had created for them. The programme used 3D models to recreate this sanctuary and to trace Michelangelo’s secret escape route].

Alexander and Michael completed their Tuscan exploration with a visit to the Uffizi, including the Botticelli room. They walked along the Medici private corridor running more than a kilometre through the city from the Uffizi to the Medici palace on the south of the River Arno. Using cutting-edge technology, this secret space was revealed as a virtual reality experience. 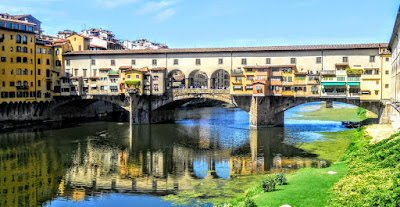 They also visited the Palazzo Vecchio, once the seat of the Medici government, the Ponte Vecchio, and the Basilica di Santa Croce.

Tonight’s programme also looked at the construction of the Campanile in Pisa, and used their cutting-edge technology why it started to lean from soon after its construction began. 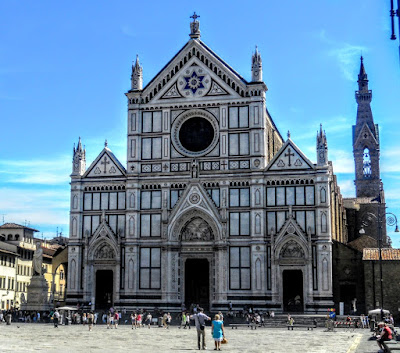 Florence, the city of beauty and Renaissance grandeur, was unmasked to reveal the seething turmoil and competition that pushed it to outdo its rivals and its richest citizens to outdo one another This was Florence, ‘the engine room of the Renaissance,’ as I have never seen it on my visits.

The three-part series as first broadcast on BBC 1 a year ago, in January 2017. Now I must go back and find their programmes on Naples and its environs, including Pompeii and Herculaneum, and Venice, whose very existence is testament to human ingenuity.


Posted by Patrick Comerford at 20:47