Following the Stations
of the Cross in Lent 5:
Longford 3: Jesus
falls for the first time 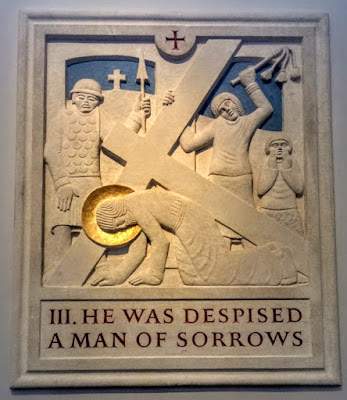 This is the First Sunday in Lent, and later this morning [18 February 2018] I am presiding at the Cathedral Eucharist and preaching in Saint Mary’s Cathedral, Limerick, in my role as Precentor of the Cathedral. Meanwhile, the Dean of Limerick, the Very Revd Niall Sloane, is visiting Saint Mary’s Church, Askeaton, Co Limerick, and Saint Brendan’s Church, Kilnaughtin (Tarbert), Co Kerry.

The idea for this series of morning Lenten meditations came from reading about Peter Walker’s new exhibition, ‘Imagining the Crucifixion,’ inspired by the Stations of the Cross, which opened in Lichfield Cathedral on Ash Wednesday and continues throughout Lent.

He uses blue to give a background dimension that works almost like a shadow in itself, impelling the foreground figures into greater relief. The 24-carat gold leaf haloes establish not only the central image of Christ but also those of his mother or disciples.

In this station, Christ has fallen beneath the weight of his Cross. This is one of the traditional Stations of the Cross that depict Passion scenes that are not recalled in any of the Gospel accounts.

As Christ stumbles on his hands and feet on the Via Dolorosa, a uniformed soldier looks on, holding a spear in one hand, while a man without a uniform grips an arm of the cross as he raises a whip in his other arm to beat Christ on the ground below him.

In the background a child raises his hands to his face in horror.

The inscription in terracotta capital letters below the panel quotes indirectly from Isaiah 53: 3 and reads: ‘He was Despised A Man of Sorrows’.

The Collect of the Day (the First Sunday in Lent):