Following the Stations
of the Cross in Lent 17:
Introducing the
Millstreet Stations 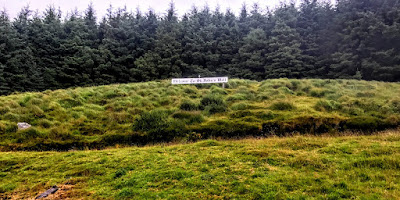 The Stations of the Cross at Saint John’s Well, south-east of Millstreet, Co Cork, are in a forested area on the slopes of Mushera, close to the Cork/Kerry border (Photograph: Patrick Comerford) 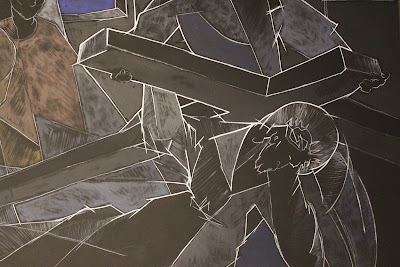 Jesus Falls ... one of the images in Peter Walker’s new exhibition in Lichfield Cathedral, ‘Imagining the Crucifixion,’ which provided the idea for this series of Lenten meditations (Photograph: Jonathan Oates, 2018)

For the next two weeks, I am looking at the 14 Stations of the Cross at Saint John’s Well outside Millstreet in north Co Cork. Saint John’s Well is 8 or 9 km south-east of Millstreet, on the slopes of Mushera, on the Aubane side of the mountain, opposite the entrance to Millstreet Country Park and a short distance from the Cork/Kerry border.

My mother was born in Millstreet, and I visited these Stations for the first time last summer during a visit to Millstreet, when my cousin brought me to visit some old family houses and around the surrounding countryside on a Sunday afternoon.

Until the 1940s, this well was the centre of a pattern on the Feast of the Birth of Saint John the Baptist, 24 June. But the days were marked by drinking and often ended in fighting and even with faction fights.

In 1954, Michael Buckley of Aubane bought an image of Saint John the Evangelist (not Saint John the Baptist) and placed it in the grotto early on Saint John’s Day. Later that day, the late Sonny Buckley of Tullig, Millstreet, decided to erect a timber altar to protect the picture on the windswept site. A committee was formed in the Aubane to raise funds to build the centre grotto using voluntary labour.

The statue of Saint John was blessed 60 years ago in 1958 by Canon Michael Costello, Parish Priest of Millstreet. The first Mass at the grotto was celebrated on 24 June 1974 and Mass has been celebrated there every year since.

When Sonny Buckley died in 1979, he left £500 in his will for the erection of Stations of the Cross at the well, with the approval of the Forestry Department. The Stations were designed by Liam Cosgrave and Sons, Sculptors, of Blackpool, Cork.

First, 14 concrete slabs were made for the Stations. Then the ground was filled with limestone from Ballygiblin. Most of the building work was carried out by John and Brendan Kelleher. The Stations were blessed by Canon P Brown, Parish Priest of Millstreet, on the Feast of Saint John the Baptist, 24 June 1982.

A Faith and Light group visited the place in 1985 and acted out the Passion and Death of Our Lord.

In 2010, the Forestry Department felled many trees around the site, the area was landscaped by the Saint John’s Well Committee, waterfalls were constructed and footbridges were erected. 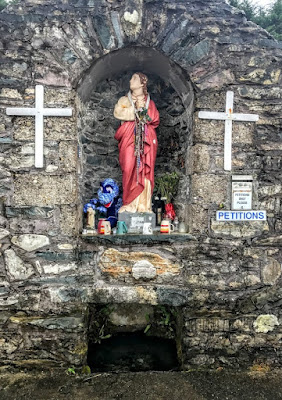 The statue of Saint John and the well at Saint John’s Well on the slopes of Mushera, near Millstreet, Co Cork (Photograph: Patrick Comerford)