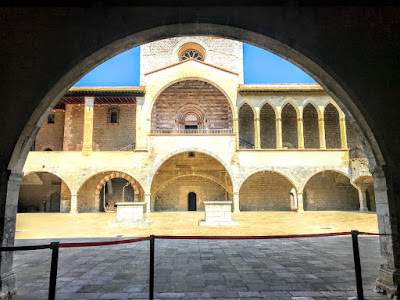 The Palace of the Kings of Majorca … built during ‘the triumph of the Gothic’ (Photograph: Patrick Comerford, 2018)

The Palace of the Kings of Majorca (Palais des Rois de Majorque), with its fortress, crenelated towers, gardens, chapels, courtyards and horseshoe-shaped arches, stands above the city of Perpignan.

Two of us climbed up through the city streets yesterday afternoon [16 May 2018] to this star-shaped gothic fortress, with its panoramic views across the Roussillon plain, out to the Pyrennes mountains and down onto the terracotta roofs of the city below.

But the Kings of Majorca had palaces in Palma de Majorca, Almadaina and Belver, and Perpignan was strategically placed between the competing interests of the monarchies of France and Spain, and close to the continuing threats from Arab rulers in the Iberian Peninsula and across the Mediterranean.

The kingdom included the Balearic Islands – Majorca, Menorca, Ibiza and Formentera – as well the counties of Roussillon and Cerdanya and the territories that James I had kept in Occitania, the signory of Montpellier, the viscountcy of Carlat, in Auvergne, and the barony of Aumelas, in the area of Montpellier.

King James II of Majorca made Perpignan the capital of his kingdom in 1276, and Perpignan became an economic, politic and cultural centre in the Mediterranean during the Middle Age.

The Palace of the Kings of Majorca … the architects were Ramon Pau, Pons Descoyl and Bernat Quer, and the castle was completed in 1309 (Photograph: Patrick Comerford, 2018)

When James II began building his palace with gardens on the hill of Puig del Rey on the south of the Perpignan, it was arguably the most exciting period in the building programmes of European mediaeval monarchs, what was ‘the triumph of the Gothic.’ His architects were Ramon Pau, Pons Descoyl and Bernat Quer, and the castle was completed in 1309.

Almost a century later, the Palace of Perpignan was at the centre of efforts to heal the schism in the western church. The grossly anti-semitic Pope Benedict XIII, who is now regarded as an anti-pope, was one of the popes based in Avignon. But when he lost the support of France he was driven out of Avignon, and in 1408 he was forced to seek refuge in Perpignan and the protection of the Kings of Aragon.

The Holy Roman Emperor, Sigismund of Luxemburg, organised a European summit in Perpignan in 1415, in an effort to convince Benedict XIII to resign his office and put to an end the Western Schism at the Council of Constance.

The Emperor met Pope Benedict XIII at the palace in Perpignan on 20 September 1415. The council was also attended by King Ferdinand I of Aragon, delegations of the Counts of Foix, Provence, Savoy, Lorraine, the embassy of the Roman Church representing the Council of Constance, and embassies from the Kings of France, England, Hungary, Castile and Navarre.

The other claimants to the Papacy had resigned, but Pope Benedict XIII refused to resign or to recognise the Council of Constance. Eventually, the emperor left Perpignan on 5 November. 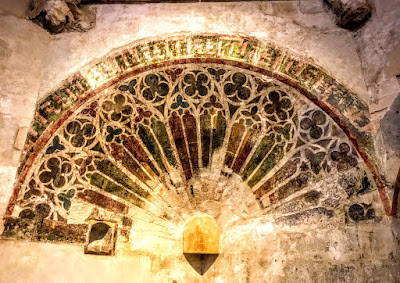 Inside the Chapel of the Holy Cross in the Palace in Perpignan (Photograph: Patrick Comerford, 2018)

Because of his stubbornness, the Council of Constance declared Benedict a schismatic and excommunicated him on 27 July 1417. The council went on to elect Martin V as the new pope on 11 November 1417. Benedict, who had lived in Perpignan from 1408 to 1417, now fled to the Peniscola Castle, near Tortosa, in Aragon. He still considered himself the true Pope, but he was recognised only in Aragon. He died at Peñíscola on 23 May 1423.

Perpignan was held by the Kings of Aragon until 1462, when the Palace was captured by the French. It was used as a barracks for three decades in the late 15th century.

The Spanish recovered Perpignan in 1493, and further changes were to the palace by Emperor Charles V, Philip II and their successors.

The Palace finally came back into French hands when the Treaty of the Pyrenees was signed in 1659. From then on it was a military barracks, and the significant French extensions included the massive red-brick walls built as fortifications by Louis XIV’s military engineer, Sébastien Le Prestre de Vauban (1633-1707).

The General Council of the Pyrénées-Orientales bought the Palace and the gardens in 1958 from the French Ministry of Defence, although the Vauban bastions and the 19th century buildings and courts remain a garrison. 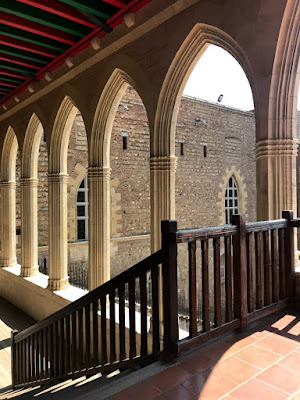 The palace in Perpignan has been in public ownership for 60 years (Photograph: Patrick Comerford, 2018)

The Palace of the Kings of Majorca has two chapels, one above the other: the lower is known as the Queen’s Chapel, while the upper chapel, the Chapel of the Holy Cross, has a pink marble Romanesque door.

The upper level includes the Great Hall, which was the seat of political power, the chapel and the royal residence. The position of the chapels in the heart the royal apartments, opposite the throne room, indicates the importance of the spiritual over the temporal. The plan of the palace was inspired by those of Majorca, and the main chapel has been compared with the earlier Sainte-Chapelle in Paris.

The walls are built with uncut stones and bricks bound with mortar, were coated with lime and painted. The doors, corridors, stairs and the main towers are all made of cut stone: ochre stone from Les Fonts, Baixas blue, sandstone, red marble from Villefranche-de-Conflent, and white and blue Marble from Ceret. 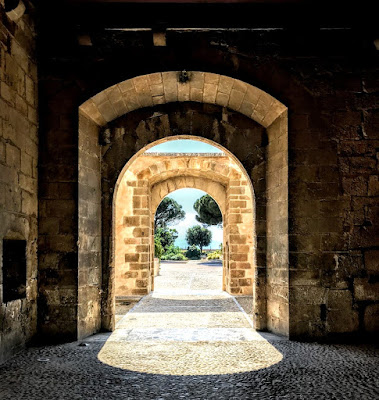 Walking through arches and courtyards in the Palace in Perpignan (Photograph: Patrick Comerford, 2018)

The benign neglect during centuries of French military control meant that much of the original architectural work of the palace was preserved. After the fall of France in 1942, and with Spain ruled by fascists, the buildings no longer had military significance.

The palace was handed over to the local government of the Pyrénées Orientales. A programme of repair and restoration began, and was completed by the local socialist mayor, a former member of the Resistance at the end of the 1940s. The restored buildings were opened to the public in 1958.

A free, three-day guitar music festival, the Guitares au Palais, is held in the Palace and the gardens each year in the last weekend of August. The programme includes traditional acoustic guitar, flamenco, classical music, gypsy music, pop music and jazz.

Looking across Perpignan from the battlements of the palace (Photograph: Patrick Comerford, 2018)