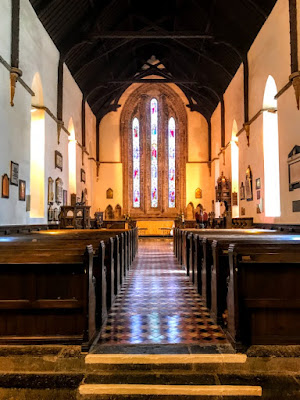 The ‘field-trip’ with clergy and readers of the Diocese of Limerick and Killaloe yesterday [30 April 2018] brought us to the three functioning cathedrals in the diocese: Saint Mary’s Cathedral, Limerick, Saint Flannan’s Cathedral, Killaloe, Co Clare, and Saint Brendan’s Cathedral, Clonfert, Co Galway.

Saint Flannan’s Cathedral stands on Royal Parade in the centre of Killaloe, near the banks of the River Shannon and on the south end of Lough Derg. This cathedral has been in continuous use since the 12th century, and the cathedral dates from the transition between the Romanesque and Gothic periods ca 1200.

Until the 19th century, the chapter of Killaloe consisted of the Dean, the Precentor, the Chancellor, the Treasurer and the Archdeacon. In addition, there were seven prebendaries – Tomgrany, Lackeen, Clondagad, Dysert, Tulloh, Iniscattery and Rath – but they had no voice in the chapter.

Samuel Lewis in 1837 counted 108 parishes in the Diocese of Killaloe, divided into 41 unions and 19 single benefices, with 56 churches, five other places of worship, and 39 glebe houses.

In the early 19th century, the duties of the Precentor of Killaloe included preaching in the cathedral four times. The crops of the dignity – the parishes whose tithes provided the precentor’s stipend – included the parish of Latteragh, Co Clare, and part of the parish of Kilmore, four miles south of Nenagh, Co Tipperary. The parishes of Innisdadrom and Kilmurry, in Co Clare also belonged to the Precentor of Killaloe, but ‘are illegally withheld from him’ and although held by former Precentors were held in the early 19th century by another priest. 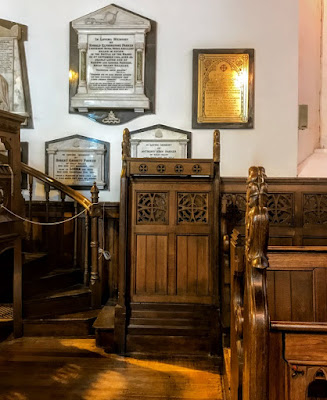 Although the Precentor’s stall, at the west end of the stalls on the north side of the choir, is also labelled ‘Preb de Tomgrany’, it was easy to identify its place in the cathedral yesterday, opposite the Dean’s stall.

In his history of the Diocese of Killaloe published in 1878, Canon Philip Dwyer (1822-1905) described the chapter and choir stalls in Saint Flannan’s Cathedral, Killaloe: ‘Passing from the nave, you enter the choir under an organ loft, the Dean’s stall on your right, the Precentor’s on your left, and the three other dignitaries and the seven prebendaries having also their several stalls ranged respectively on either side.’

One of my predecessors as Precentor of Killaloe in the 19th century was Canon John Studdert (d. 1849), a grandson of Maurice Studdert (d. 1798) of Elm Hill, Rathkeale, Co Limerick, and a nephew of the Revd George Studdert, Rector of Kilpeacon, Co Limerick, who married Elizabeth Massy of Stoneville, near Rathkeale.

Dean Kennedy of Clonfert was the father of William Studdert Kennedy, vicar of Saint Mary’s, Quarry Hill in Leeds, and grandfather of the Revd Geoffrey Anketell Studdert Kennedy, MC (1883-1929), the Anglican priest poet who was known as ‘Woodbine Willie’ for giving cigarettes along with spiritual pastoral care to injured and dying soldiers in the trenches in World War I.

‘Woodbine Willie’ always regarded himself as Irish. He studied theology and classics at Trinity College Dublin before training for ordination at Ripon College.

Appropriate thoughts, indeed, to think about on May Day.

When he died in Liverpool in 1929, exhausted at the age of 45, it is said the Dean of Westminster refused his burial at Westminster Abbey because, he said, Studdert Kennedy was a socialist,’ although he had distrusted politicians and had never joined a political party. His funeral took place, instead in Worcester, where he had been a vicar before the war, and poor people flocked to pay him their respects.

Every time I pass through Birmingham on my way to and from Lichfield, I recall his poem ‘Indifference’, or ‘When Jesus came to Birmingham,’ written while he was a war chaplain. In this poem, he compares the behaviour of Christ’s contemporaries with our behaviour today towards the stranger and the outcast, and challenges us in Lent to consider whether we are following Christ to Golgotha. 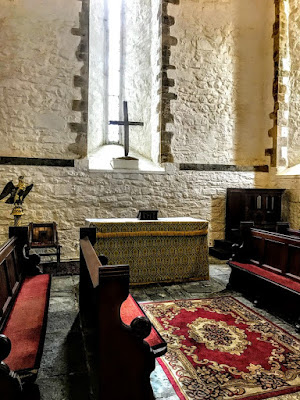 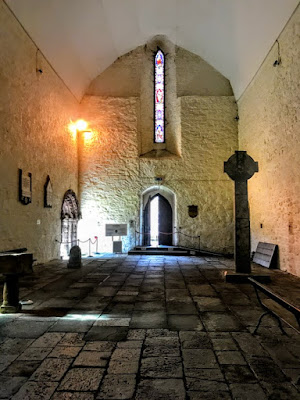