Did the village seem brighter without
the ‘dark weight of his heavy cloak’? 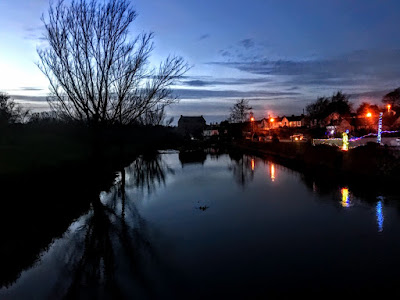 After visiting the Éamon de Valera Cottage outside Bruree late on Saturday afternoon, darkness had enveloped the Co Limerick countryside as I returned through the village of Bruree.

In his poem ‘Returning to de Valera’s Cottage’ in The Sorrow Garden (London: Anvil, 1981), the Cappoquin-born poet Thomas McCarthy writes about the ‘dark weight’ he imagines this cottage and Dev’s intense presence cast over Bruree:

Coming down the hill we could see the summer
village, mill-wheel and stream
churning up the wet sunlight.
The village seemed brighter
then without the dark weight
of his heavy cloak or a threat
of his sword-cane over their
votes. Their great child had been dead for years.

So that ordinary children came back onto the street
while adults gossiped lightly
unafraid of the official cars –
not that he was held in awe,
but the walking evidence of
so intense a life frightened
the whole village and kept them from serious thought.

In finding his cottage we found a life that was
inside ourselves. A small
moment of sorrow. A tear
riding down the glass of
our eyes like blood fall-
ing from a bullet wound.
We kicked the heap of weeds
with our heels and cursed the narrowness of the path.

As we returned from Knockmore and Dev’s cottage, we felt we had left a place that many people respect as a holy site, even though ‘their great child had been dead for years.’

We found now that Bruree was darker, there were few cars, no children on the street, and no adults to be seen gossiping lightly. But it was a dark winter evening, and I can imagine Bruree today is little different from the Cappoquin that the poet and I knew growing up at the same time in West Waterford rather than east Limerick.

Two of us stopped at the bridge to admire the reflections of the last, remaining Christmas lights of Bruree on the River Maigue as it flows on towards Adare and the Shannon Estuary, and looked up at the shadowy profiles of the tower house and the former Church of Ireland parish church on a ridge above the bridge and the river bank.

Bruree takes its name from an ancient royal fortress once built here and in the High Middle Ages it was known as Dún Eochair Maigue or the Fortress on the Bank of the Maigue. Brúgh Rí literally means the Fort of the King.

As if the associations with Éamon de Valera did not provide enough sense of pride and history, local lore and legends claim Bruree was once a seat and alternative capital of the ancient Kings of Munster, and that this place once was a royal capital until the late 12th century.

After the Anglo-Normans arrived, Samuel Lewis claims, that the Knights Templars built the castle in the 12th century, but there is no other record to support his claim. The area later belonged to the de Lacey family, who built the tower house in the 15th century. This tower house was seized during the Cromwellian confiscations of the 1650s and fell into disrepair.

Beside the tower house, the Church of Ireland parish church, Saint Munchin’s Church, Ballynoe, was built in 1812, with funding from the Board of First Fruits. The church cost £800 to build and stands on the site of an older church, surrounding by an old churchyard.

This three-bay, single-storey church has a nave and a square-plan, stepped, three-stage crenellated tower at the west end, with an octagonal limestone spire. The details include the ball finial on the tower, ogee-headed and trefoil openings and the limestone copings.

A sign on the pathway leading up the ruined castle and former parish church tells visitors, even though the church has been closed for years, ‘This is a holy place – please respect it.’ 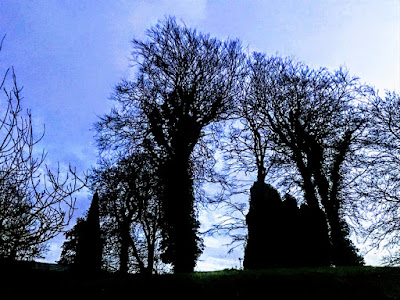 The spire of Saint Munchin’s, the former Church of Ireland parish church, and the ruins of the de Lacy castle in silhouettes on a ridge above the banks of the River Maigue in Bruree (Photograph: Patrick Comerford, 2019)