Why the Bishop of Norwich
forgot to pass the Port 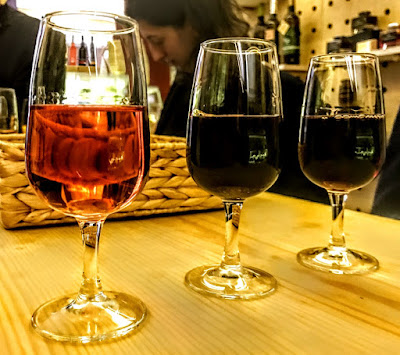 Now all this has changed because Ryanair’s new checked-bag policy makes it easier to bring back a bottle of wine, or even two, in my suitcase.

And who could come to Porto without wanting to bring back a bottle of Port?

Walking down the hill from Porto Cathedral earlier this week, I decided to stop in a small shop selling varieties of port by the glass and the bottle, and serving it with dark chocolate, to learn a little more about Port.

Port wine (vinho do Porto), or simply Port, is a fortified wine produced with distilled grape spirits exclusively in the Douro Valley in this part of Portugal.

Port is typically a sweet, red wine, often served as a dessert wine, but it also comes in dry, semi-dry, and white varieties.

Port is produced from grapes grown and processed in the demarcated Douro region. The wine is then fortified by the addition of a neutral grape spirit known as aguardente to stop fermentation, leaving residual sugar in the wine and boosting its alcohol content. The wine is then stored and aged, often in barrels stored in a ‘Lodge’ or ‘cellar,’ before being bottled.

This wine became known as ‘port’ in the late 17th century because wine from the Douro Valley was brought to Porto for export to other parts of Europe. The Douro Valley stretches from the village of Barqueiros, about 70 km upstream from Porto, and east almost to the Spanish border.

Over 100 varieties of grapes may be used in producing port, although only five are widely cultivated and used. White ports are produced the same way as red ports, but use white grapes, and all Ports commercially available are from a blend of different grapes.

Until 1986, Port could only be exported from Portugal from Vila Nova de Gaia on south bank of the Douro, facing Porto. Traditionally, the wine was taken downriver in flat-bottomed boats, barcos rabelos, to be processed and stored.

But this tradition was brought to an end when several hydroelectric power dams were built along the river in the 1950s and 1960s. Now the wine is brough from the vineyards by tanker trucks and today the barcos rabelos are only used for racing and other displays.

The main categories of port include standard rubies, three-year-old tawnies and white ports. In English-speaking countries, Port is often served after meals as a dessert wine, often with cheese, nuts or chocolate. White and tawny ports are often served as aperitifs. 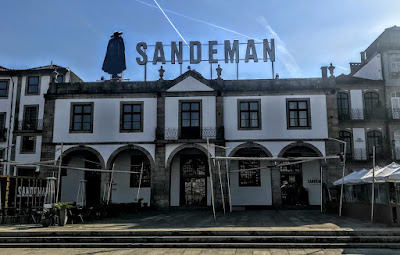 A Liverpool wine merchant sent two new representatives to Viana do Castelo, north of Porto, in 1678 to learn the wine trade. When they arrived in the Douro Valley, they visited the Abbot of Lamego, who treated them to a ‘very agreeable, sweetish and extremely smooth’ wine that had been fortified with a distilled spirit. They were so pleased with the product that they bought up the Abbot’s entire lot and shipped it home.

Port became popular in England after the Methuen Treaty in 1703, when merchants were permitted to import it at a low duty, while war with France deprived English wine drinkers of French wine.

The continued British involvement in the port trade can be seen in the names of many Port shippers and brands, including Broadbent, Cockburn, Croft, Dow, Gould Campbell, Graham, Osborne, Offley, Sandeman, Taylor, and Warre. Shippers of Dutch and German origin are also prominent, such as Niepoort and Burmester. A few Port shippers and producers are also Portuguese, including Ferreira and Quinta do Crasto.

English tradition calls for port served at dinner to be passed to the left – as the saying goes, ‘pass the port to port’ – pouring a glass for your neighbour on your right before you do so. The bottle or decanter should not to touch the table on its way around. If a diner fails to pass the port, others at the table may ask ‘Do you know the Bishop of Norwich?’

The origin of the question is attributed to Henry Bathurst who was Bishop of Norwich in 1805-1837. He lived to the age of 93, but by then his eyesight was failing and he had a tendency to fall asleep at the table near the end of a meal. As result, he often failed to pass on the Port, so that several decanters would accumulate at his right elbow, to the distress of anyone further up the table. A bon vivant said to possess a prodigious capacity for wine consumption, he was sometimes suspected of using these frailties to his advantage.

Other sources say the question originates with John Sheepshanks, Bishop of Norwich in 1893-1910, and Bishop Sheepshanks did his best to perpetuate this notion. His portrait, donated by his grand-daughter, hangs on the wall at Taylor’s Quinta de Vargellas as an encouragement to guests to pass the Port.

I have two bottles of Port to bring back in my checked bags tomorrow. 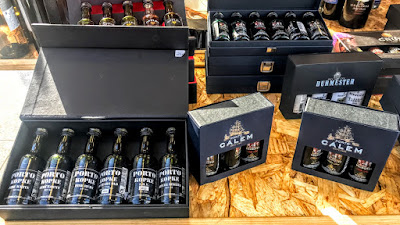 Pass the Port to the left please … a choice of bottles in a shop window in Porto (Photograph; Patrick Comerford, 2019)