‘Portugal’s Captain Dreyfus’
who revived the Jewish
community in Porto 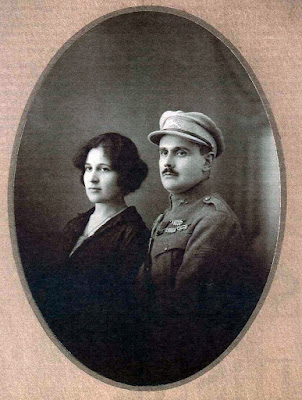 During my walking tour of Porto yesterday [5 February 2019], and my visit to the Kadoorie Synagogue in the suburbs, I heard the extraordinary story of Artur Carlos de Barros Basto (1887-1961), the former amry captain revived the Jewish community in Porto, overcoming many personal obstacles and a very public attempt to disgrace him.

His life story has earned him the name of the ‘Captain Dreyfus of Portugal,’ recalling the disgraceful treatment of Captain Alfred Dreyfus i(1859-1935) in France.

Artur Carlos de Barros Basto, also known by his Hebrew name Abraham Israel Ben-Rosh (אברהם ישראל בן-ראש‎), had a successful career both in the military and as a writer, and published several works on Judaism.

He was one of the key figures in re-establishing the Jewish Community in Porto and in building the Kadoorie Synagogue, the biggest synagogue in the Iberian Peninsula and one of the biggest synagogues in western Europe. He also helped the return of Crypto-Jews to Judaism and during World War II helped Jewish refugees escape the Holocaust.

Artur Carlos de Barros Basto was born in Amarante in Portugal on 18 December 1887. When he was still young, his dying grandfather revealed to him that the family had Jewish ancestors, descended from Portuguese Jews who had been forced to convert to Christianity by the Inquisition in the late 15th or early 16th century.

His family had not observed Jewish traditions and rites, and so he only became aware of the existence of Jews in Portugal in his late teens 1904. That year he read a newspaper report referring to the inauguration of the Shaaré Tikva synagogue in Lisbon.

When a Republic was declared in Portugal in 1910, Barros Bastos was one of the young army officers who raised the Republican flag in Porto. Soon after, as a lieutenant in the army during World War I, he commanded a battalion of the Portuguese Expeditionary Corps at the front in Flanders. For his bravery on the battlefield, he was decorated and promoted to the rank of captain.

Barros Basto was self-taught, and after learning Hebrew he lived for a while in Morocco. There he began a formal process of conversion to Judaism (known in Hebrew as Giur). He was circumcised in Tangier, presented himself before a rabbinical court (Beit Din), and in a religious ceremony took the Jewish name of Abraham Israel Ben-Rosh.

Back in Lisbon, he married Lea Israel Montero Azancot, a member of the Jewish Community in Lisbon. They had a son and a daughter and several grandchildren and great-grandchildren. The couple returned to Porto in 1921. There Barros Basto realised fewer than 20 Ashkenazi Jews were living in the city. They had no synagogue in Porto and had to travel to Lisbon for religious purposes whenever necessary 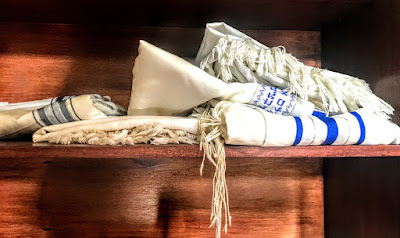 Prayer shawls in the synagogue in Porto (Photograph: Patrick Comerford, 2019)

Barros Basto began to plan building a synagogue in Porto, and in 1923 he officially registered the Jewish Community of Porto and the Israelite Theological Centre in Porto. He also founded a Portuguese Jewish newspaper, Ha-Lapid.

At first, the community rented a house on Elias Garcia street that began to function as a synagogue. As time went on, more and more people turned up in the synagogue, claiming they were the descendants of conversos or Jews who had been forced to convert to Christianity in the 15th and 16th centuries. They described how their families had secretly kept alive yet some Jewish practices and rituals in the secrecy of their homes. Now, these secret or crypto-Jews began to take part in public Jewish rituals and worship.

The claims of the crypto-Jews were proved true by Barros Basto with the support of a committee of London, who found that they did not lie about their origins since they continued Jewish prayer practices and the ancestors’ observance of the Sabbath. The Jewish community on Porto agreed to admit anyone who could ‘absolutely prove their Jewish origin.’

Barros Basto started to visit villages and towns in the Trás os Montes and Beiras areas, searching out people interested in returning to Judaism. To support this mission, the Community of Portuguese Jews in London set up the Portuguese Marranos Committee to help people of Jewish descent to return to the Judaism of their ancestors.

When the Salazar regime came to power in Portugal in the 1932, Barros Basto was identified with opposition. Life became increasingly uncomfortable for him as he was sent on placements in locations increasingly distant from Porto in move to forcibly distance him from the synagogue and Jewish community that was growing slowly but steadily.

An army disciplinary board ruled against Barros Basto in 1937. He was dismissed from army and deprived of his commission for taking part in circumcision ceremonies, described as ‘immoral’ acts. 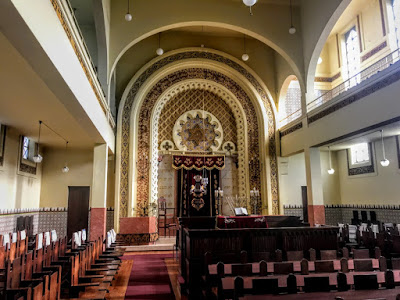 Inside the Kadoorie Synagogue, which opened in in Porto in 1938 (Photograph: Patrick Comerford, 2019)

A year later, the Kadoorie Synagogue was officially opened in in Porto in 1938. This had been his great project for almost a decade, and Barros Basto had collected the funding, bought the site and inaugurated the building project. This became the headquarters of the Jewish Community of Porto and still retains its religious functions.

During World War II, Barros Basto helped hundreds of Jews to escape the war and flee the Holocaust, helping thousands of refugees to rebuild their lives, beginning with a fresh start in Porto.

Barros Basto died on 8 March 1961 in Porto. In accordance with his wishes, he was buried in Amarante, the city where he was born. He was wearing the uniform with which he always served his country. On his deathbed he said that one day he would receive justice, but this did not come in 2012, over 50 years after his death.

His granddaughter, Isabel Ferreira Lopes, presented a petition to parliament on 31 October 20111, and finally the name of Barros Basto was vindicated on 29 February 2012. The petition, approved unanimously by all political parties, says the dismissal of Barros Basto from the army was a case of political and religious prejudice, motivated by the fact that he was a Jew.’

The name of Captain Barros Basto was officially and posthumously rehabilitated by the Portuguese State in 2012. His granddaughter, Isabel Ferreira Lopes, is now the Vice President of the Jewish Community of Oporto. He is also great-granduncle of the Portuguese-American actress Daniela Ruah.