An evening reception
in Derry’s Guildhall for
General Synod members 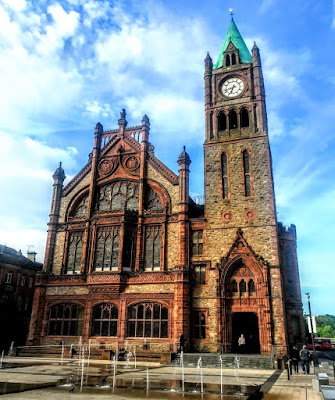 The Guildhall, Derry … the venue for last night’s reception for members of the General Synod (Photograph: Patrick Comerford, 2019)

I am in Derry of Londonderry – the city Lyra McKee creatively called Legenderry – for three days this week for the General Synod of the Church of Ireland, which opened yesterday [16 May 2019] with the Synod Eucharist in Saint Columb’s Cathedral, and closes tomorrow.

Last night, members of the General Synod were guest of the Mayor of Derry, Councillor John Boyle, at a reception in the Guildhall, a beautiful building in the heart of the city, just outside the city walls.

The Guildhall is one of the most striking buildings in the North West and was built in 1887 by the Honourable the Irish Society, and cost £19,000 to build. The red sandstone building is designed in the neo-gothic style, with Tudor overtones. It contains stunning examples of stained glass windows, many representing the Guilds of the City of London, the history of London, dominions throughout the former British Empire, and former regiments from World War I.

Other impressive features of the Guildhall include the staircase, the organ in the main hall organ and the panelled corridors.

Derry’s first 17th-century Guildhall stood in the Diamond area of the Walled City. Its name reflected the status of the city that was founded by Guilds of the City of London. This building was destroyed by fire in Victorian times and it was decided to turn the site of the former Guildhall into a city square.

Work started on building a new Guildhall in 1887 and it was opened in 1890. The new building was first known as Victoria Hall, in a fashion at the time of naming landmarks after Queen Victoria. Other landmarks in the city from that time include Victoria Market, the Queen’s Quay and Queen’s Street. 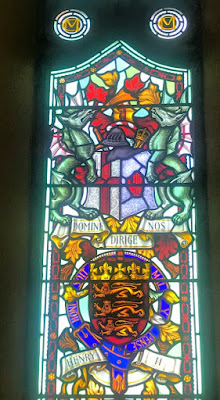 The stained-glass windows throughout the Guildhall are impressive features (Photograph: Patrick Comerford, 2019)

The Guildhall was designed by the architect John Guy Ferguson (1829-1901). He was in practice by 1861 as a member of the firm of Frazer, Ferguson and Frazer. He was appointed architect to the Church of Ireland Diocese of Derry and Raphoe in 1868, and restored and enlarged Saint Columb’s Cathedral in 1885-1887. By 1868, he had set up his own practice in Shipquay Street, Derry. From there he moved to East Wall in 1875 and to Pump Street in 1891.

Ferguson, who was a prominent Freemason and Orangeman, died ‘at a very advanced age’ in early 1901. He designed Saint Augustine’s Church in Derry, and other Church of Ireland parish churches in Burt, Aghadowney, Coleraine, Culmore, Draperstown and Ramelton. His other works include Waterside Methodist Church, Derry (1862), Waterside Presbyterian Church (1863-1866), and Presbyterian churches in Buncrana, Moville, Raphoe, Sion Mills and Strabane.

The City Hall was badly damaged by fire in Easter 1908, with only the clock tower, which is modelled on Big Ben in Westminster, surviving intact. The whole building was rebuilt and renovated after the fire and reopened in 1912. The architect for this project was William Edward Pinkerton. 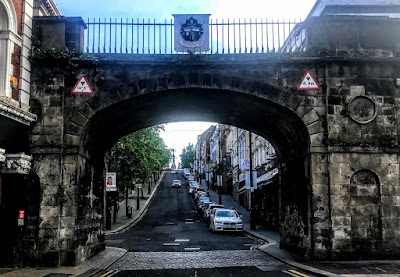 Looking up Shipquay Street from the Guildhall (Photograph: Patrick Comerford, 2019)

During the ‘Troubles,’ the Guildhall was the victim of many terror attacks. The building was badly damaged by two bombs in 1972, but was restored at a cost of £1.7 million and reopened in 1977. In 1980, the Field Day Theatre Company presented its first production, the premiere of Brian Friel’s Translations here.

The square in front of the Guildhall is Derry’s main city square and regularly plays host to important events. It was the site of President Bill Clinton’s address when he visited Derry in 1995.

A major restoration began in 2010 with the contractors H & J Martin, the firm that built Belfast City Hall, overseen by Derry City Council and a special conservation design team led by Consarc.

The external work, costing £3 million, included the restoration of the stonework, roofs, windows and stained glass, as well as the clock. New steps and a ramp were built at the entrance at Guildhall Square. The restoration of the stained glass windows was overseen by Stephen Calderwood, who had worked on them with his father Jack when they were damaged in the 1972 bombings.

The internal work, costing about £5 million, involved the full internal reorganisation and restoration of the Guildhall as a key tourist attraction and arrival point for the City as part of the Walled City Signature Project.

The restoration was completed in 2013. The building now boasts a new multifaceted tourism experience providing a central hub for visitors. The huge undertaking included external restoration works to the stonework, roof, windows, stained glass and the clock.

During the second phase of the project, work was carried out on the internal restructure to offer further facilities:

Since its restoration, the Guildhall has received awards in a number of prestigious regional and national architectural and construction competitions.

The Guildhall includes a large hall that is the venue for social and political events, including the Mayor’s reception last night. It has been home to the Feis Doire Colmcille, celebrating Irish culture, and was also home to the Saville Inquiry into events in Derry on Bloody Sunday, 30 January 1972.

The square in front of the Guildhall is also the home for many city events, such as Hallowe’en carnivals, switching on the Christmas lights and the Christmas European Market. Recently, the square has played host to LGBT events such as Foyle Pride and it has seen protests organised by Occupy Derry. 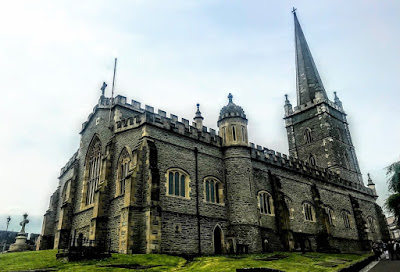