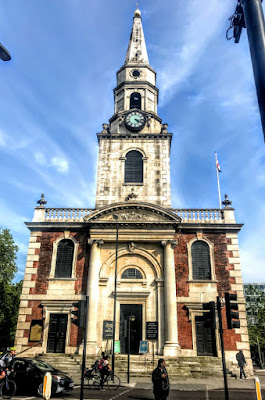 Saint George the Martyr Church in Southwark is one of the oldest churches in England dedicated to Saint George (Photograph: Patrick Comerford, 2019)

Before coming to Derry for the meeting of the General Synod of the Church of Ireland, which began today [16 May 2019] and continues until Saturday, I spent much of yesterday [15 May 2019] at a meeting of the trustees of the Anglican mission agency USPG (United Society Partners in the Gospel) in the new USPG offices in Trinity Street, Southwark.

On my way back to Liverpool Street Station and a flight from Stansted to Dublin, I stopped to visit Saint George the Martyr, around the corner from the new USPG offices. This is, historically, the parish church of Southwark, and many people also think of it as the parish church of ‘Little Dorrit.’

Thousands of years ago, the area that is now Southwark was mainly a series of gravel islands on the south bank of the Thames estuary. By the Roman period (43 AD to 410 AD), this area was effectively an extension of the Roman city of Londinium on the north bank of the Thames, and there is archaeological evidence of Roman habitation on the site of Saint George’s Church.

Saint George’s is in the Borough district of south London, and within the Borough of Southwark. It is a Grade II* listed building on Borough High Street, standing at a busy junction with Long Lane, Marshalsea Road and Tabard Street. 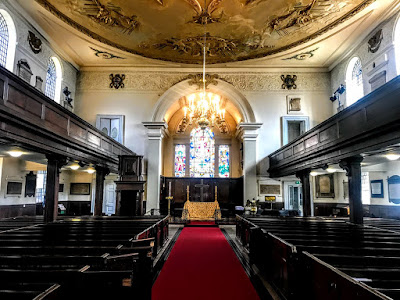 Saint George the Martyr is one of the oldest churches in England dedicated to Saint George. According to tradition, Saint George was a soldier in the Roman army and was killed on the orders of the Emperor Diocletian in 303 for refusing to persecute Christians and for confessing to his own Christianity.

The first confirmed reference to the church is in the Annals of Bermondsey Abbey, which claims that the church was given by Thomas Ardern and Thomas his son in 1122. The date follows the Battle of Acre. when the myth of Saint George was by English crusaders. Perhaps the dedication of the church is related to the involvement of the Arderns. in the Crusade.

The Ardern family gift included tithes from their manor at Horndon in Essex and ‘land of London Bridge returning five solidos.’ This means Saint George’s is the first and the oldest church with this dedication in the London area. This predates by more than 200 years King Edward III’s adoption of Saint George as the patron of the Order of Garter. The statement is also the first reference to London Bridge’s endowment lands.

When Henry V returned from the Battle of Agincourt in 1415 he was welcomed by the Aldermen of London on the steps of the church. The ‘Agincourt Song’ was commissioned as part of the celebration. In this battle, the standard with the red cross was used for the first time. In the same year Saint George became the patron saint of England.

The west tower dominates views along Borough High Street from both the north and south due to the curve in the street at this point, where it now meets Great Dover Street.

Originally, a much narrower road to the south of the church called Church Street led into Kent Street (now renamed Tabard Street), the historic route to Dover. Due to the volume of traffic, Great Dover Street was cut through parallel to Kent Street as part of the road network enhancements associated with the new Westminster Bridge and London Bridge route improvements in 1750.

Later, Tabard Street was extended through the churchyard on the north side, leaving the church standing alone on a traffic island. 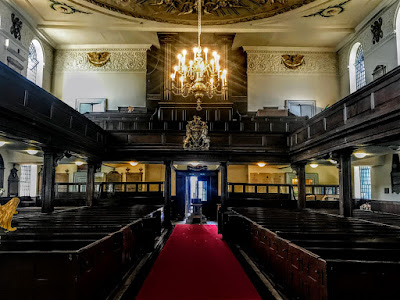 The present church is said to be the third on this site. The first church was a Norman church, and inscribed stones from this church were discovered in the second church.

This first church was replaced at the end of the 14th century by a a church with a three-storey bell tower. It may have been from there they Antonin de Wyngaerde surveyed at least part of his plan view of London, which includes a drawing of the church, but slightly out of position.

The church was heavily renovated around 1629, and this is the church that appears in William Hogarth’s engraving of Southwark Fayre (1733), a year before it was demolished.

A new church was designed in the Classical style by John Price in 1734-1736, partly funded by £6,000 from the Commission for Building Fifty New Churches. The major city livery companies and the Bridge House Estates also supported this rebuilding, and to this their arms decorate the nave ceiling and stained glass.

This third church on the site opened in 1736, and this is the church that stands today. The church is built of red brick with Portland stone, and has a copper and slate roof. There is a pediment at the west entrance, supported by Ionic columns. The tympanum displays reliefs of angels, and eight steps lead up to the entrance. The tower is built of Portland stone and has a large spire, with a ball and weathervane at the top. 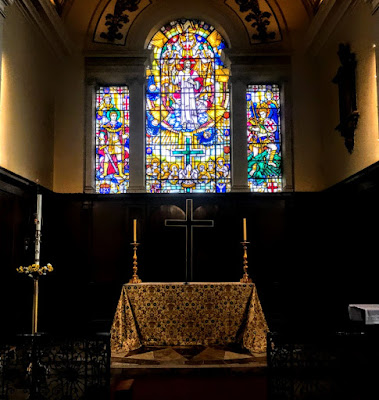 The High Altar, chancel and East Window in the Church of Saint George the Martyr (Photograph: Patrick Comerford, 2019)

Inside, there is a gallery on three sides of the nave, with a pair of fluted Ionic columns supporting the gallery at the west end. The original pews were replaced with box pews in 108, but most of these were shortened to their current height in 1855.

The ceiling includes a painting executed by Basil Champneys in 1897, with golden cherubs breaking through a clouded sky and with texts on a ribbon. It was restored in the 1950s after bomb damage during World War II.

The church has a tall pulpit on four Ionic columns, and an octagonal font of grey marble. The original mediaeval font is now in the chapel of the Old Palace School in Croydon, and the present font dates from the late 19th century.

The chancel has three bays. The east window was designed by the stained-glass artist Marion Grant and was installed in 1951 to replace an earlier window destroyed by bombing in 1942. 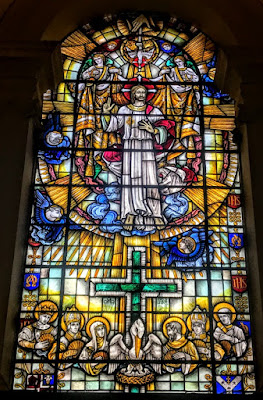 The Ascension, with Christ in majesty, in the central window at the east end of Saint George the Martyr (Photograph: Patrick Comerford, 2019)

The central window has an image of the Ascension with Christ in majesty. At his feet are a number of pilgrims and saints, each holding a scallop shell, the symbol of pilgrimage. In the centre of the group is a pelican. It is said the pelican pierces her own breast to feed her young, and so the pelican symbolises the sacrifice of Christ and the salvation of humanity. 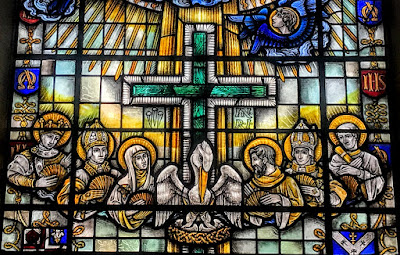 The left-hand window shows Saint George trampling down the decree of the Emperor Diocletian. The right-hand window depicts the Archangel Michael destroying the devil, who appears as a dragon.

A second depiction of Saint George the Martyr is found on the south wall. This war memorial window came from Hanwell Residential School when it closed in 1933, and is the only window in the church to survive bombing in World War II.

Saint George the Martyr has two reliefs of the Royal Arms. The main one, on the gallery at the west end, is the Stuart royal arms, below the organ gallery and is said to have come from the former church of Saint Michael Wood Street. The second royal arms are the arms of Hanover and hangs over the main entrance.

On a frieze around the top of the walls are the coats of arms of four London Livery companies – Skinners, Drapers, Fishmongers and Grocers – as well as the arms of the City of London and the Bridge House Mark.

The vestry accounts show that there has been an organ in Saint George’s since 1682. The current organ has some original pipes thought to be made by Father Smith. Although the organ has been modified over the centuries, its original elements make it an exceptional and rare instrument.

The crypt was cleared in 1899, when 1,484 coffins were removed and reburied at Brookwood Cemetery. The foundations of the south wall were strengthened in 1938 and helped save the building from collapse during World War II, when the damage from German bombings was considerable.

The red brick and Portland Stone structure has suffered from considerable damage due to subsidence , and the nave was declared unsafe in 2000, although services continued in other parts of the building.

Repairs and refurbishments in 2005 involved completely underpinning the building, and lowering the floor levels in the crypt to create a parish hall. A large number of Georgian lead coffins were removed from the crypt to allow the works to take place.

From September 2005 and March 2007, the parish worshipped at Guy’s Chapel nearby. The new crypt or hall provides a conference venue in central London. Services in Saint George’s resumed on Palm Sunday, 1 April 2007.

As well as two Sunday services and a mid-week service on Wednesdays, the church offers a wide range of activities, including a café, lunchtime concerts, a music academy for local children, a community foodbank and a night-shelter for homeless people during winter, as well as a quiet space for reflection and contemplation that is open to everyone. 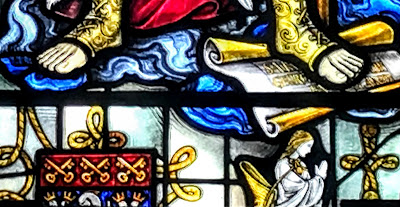 The church also has strong associations with Charles Dickens, whose father was jailed for debt in nearby Marshalsea prison. The surviving wall of the prison adjoins the north side of the churchyard. Charles Dickens lived nearby in Lant Street, in a house that belonged to the Vestry Clerk of Saint George’s. This was the darkest period in his life, when he had to work in the ‘blacking factory,’ and his literary career must have seemed an impossible dream.

Later, Dickens set several scenes of his novel Little Dorrit in and around Saint George’s Church. One cold night, Amy Dorrit sought shelter in the vestry.

A small representation of Little Dorrit in Marion Grant’s east window, below Saint George, shows her kneeling in prayer as her woven bonnet falls across her back like the wings of an angel.

Almighty God,
to whose glory this house of prayer is dedicated:
we praise you for the many blessings
you have given to those who worship you here:
and we pray that all ho seek you in this place may find you,
and, being filled with the Holy Spirit,
may become a living temple acceptable to you;
through Jesus Christ our Lord,
Amen. 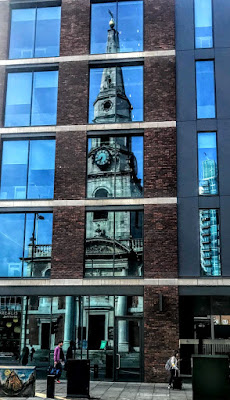 The Church of Saint George the Martyr reflected in the buildings of Borough High Street, Southwark (Photograph: Patrick Comerford, 2019)