How an Indian chief
finally had a hearing at
Southwark Cathedral 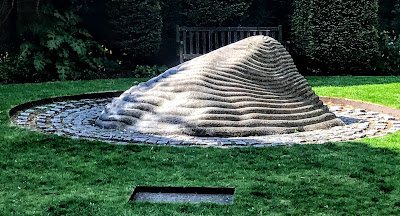 On my way from Liverpool Street Station to the meeting of the trustees of the Anglican mission agency USPG (United Society Partners in the Gospel) yesterday [15 May 2019] in our new offices in Trinity Street, Southwark, I stopped briefly at Southwark Cathedral, which I had not visited for a number of years.

In the cathedral gardens, the story is told of Mahomet Weyonomon, described as a Mohegan Sachem or chief, who died at the age of 36 in Aledermanbury in the City of London.

Mahomet’s presence in London was the result of injustice and exploitation. His tribe had helped the first English settlers in New England to survive the bitter cold and to repel attacks by other Americans Indians.

Mahomet Weyonomon was a cultured and educated man who could speak, read and write several languages, including English and Latin. He was the grandson of Sachem Owenoco, who was granted the return of Mohegan lands by an order in 1705. But this order was ignored by the government of Connecticut.

His people, the Mohegans, became allies of the English, but the settlers soon began to teal tribal lands. The Mohegan are a Native American tribe historically based in the present-day Connecticut. The majority are associated with the Mohegan Indian Tribe, a federally-recognised tribe that lives on a reservation in the eastern upper Tames River valley of south-central Connecticut.

Despite support for the Mohegan cause from Queen Anne’s Commissioners in 1705, the lands were never returned.

Mahomet sailed to London with three supporters in 1735 to petition King George II for the return of their lands. They rented accommodation at Saint Mary Aldermanbury in the City of London while they prepared their petition to the king.

But while they were awaiting a royal audience, Mahomet and Captain John Mason, a descendant of the settler who had first act as a guardian and trustee of Mohegan land, contracted smallpox and they both died in 1736.

Because, at the time, foreigners could not be buried in the City, Mahomet’s body was carried across the River Thames and he was buried near Saint Saviour’s Church, which later became Southwark Cathedral.

The exact location of his grave is unknown, but a sculpture in the garden on the south-east side of the cathedral is his memorial today.

The memorial was erected at the request of the Mohegan tribe to honour a fallen chief. A stone was brought from Mohegan lands and carved with forms the reflect ancient custom by Peter Randall-Page.

These forms include a four-domed medallion or rosette and trail motifs. The medallion is carved at the top of the memorial and symbolises the spiritual force that flows through all things. The parallel lines and trail motifs represent paths travelled through life.

It was unveiled by Queen Elizabeth II on 22 November 2006, with the tribal chairman, Bruce Two Dogs Bozsum and the US Ambassador symbolically granting the audience Mahomet never received.

The sculpture has added poignancy because the word Sachem comes from the Mohegan word for stone or rock. 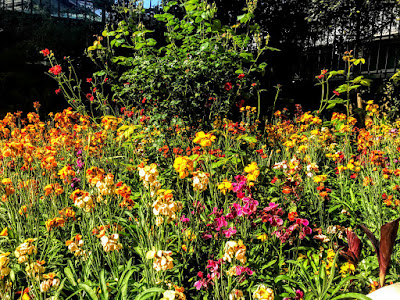 Flowers in the garden of Southwark Cathedral on a sunny morning (Photograph: Patrick Comerford, 2019)