Peterborough owes its
prosperity to a monastery
and the modern railways 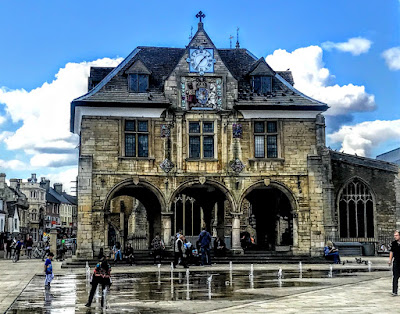 I spent much of yesterday [13 August 2019] in the cathedral city of Peterborough. Although I had passed through Peterborough before on train journeys between Cambridge and Birmingham, this was my first time to visit the city and its cathedral.

Peterborough, with a population of about 200,000, was historically part of Northamptonshire, but is now in Cambridgeshire. It is about 110 km east of Birmingham, about 63 km north-west of Cambridge, and 120 km north of London. It stands on the banks of the River Nene which flows into the North Sea about 50 km to the north-east. in some parts of the surrounding countryside, the land lies below sea level, and parts of the Fens are to the east of Peterborough.

There is archaeological evidence of an early Roman presence here. The Romans established a fortified garrison town at Durobrivae on Ermine Street, 8 km to the west in Water Newton, in the mid-1st century AD. There was also a large 1st century Roman fort at Longthorpe, designed to house half a legion, or about 3,000 soldiers, and it may have been set up as early as AD 44-48.

But the city really dates from the Anglo-Saxon period, when a monastery was established at Medeshamstede, which would later become Peterborough. Medeshamstede may have been an Anglian settlement before AD 655, when Sexwulf founded a monastery on land he had been granted to him by Peada of Mercia, who converted to Christianity.

The name of Medeshamstede was changed to Burgh from the late 10th century, possibly after Abbot Kenulf had built a defensive wall around the abbey.

In the Anglo-Saxon resistance to the Norman conquest of England after the Battle of Hastings in 1066, Hereward the Wake rampaged through this town in 1069 or 1070. But the Abbot, Turold, fought back and built a fort or castle outside the deanery garden, now called Tout Hill.

The abbey church was rebuilt and greatly enlarged in the 12th century and the town eventually developed into the Peterborough, although it did not become a borough until the 12th century. The Monastery of Saint Peter, Saint Paul and Saint Andrew was rebuilt in its present form between 1118 and 1238. The burgesses received their first charter from Abbot Robert – probably Robert of Sutton (1262–1273).

With the dissolution of the monastic houses during the reign of Henry VIII, the abbey church became the cathedral at the centre of the new Diocese of Peterborough in 1541, when the last abbot was made the first bishop and the abbot’s house became the episcopal palace. The first of Henry’s six wives, Katharine of Aragon, was buried in this cathedral when she died in 1536.

Later, Mary Queen of Scots was also buried here after her execution in 1587, but her son, James I, later moved her body to Westminster Abbey, which I visited again on Monday afternoon.

During the English Civil War, Peterborough was divided between the Royalist supporters of King Charles I and the Parliamentarians, and the war reached Peterborough in 1643 when soldiers arrived in the city to attack Royalist strongholds at Stamford and Crowland.

While Peterborough was in the Parliamentarian hands, the Puritan soldiers ransacked the cathedral and destroyed the Lady Chapel, the chapter house, the cloisters, the high altar and the choir stalls, as well as mediaeval decorations, tombs, monuments and records. 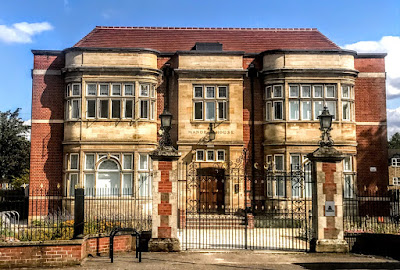 The Manor House, Peterborough … the Dean and Chapter of Peterborough succeeded the abbot as lords of the manor (Photograph: Patrick Comerford, 2019)

Peterborough’s 17th-century Guildhall, facing the west end of the cathedral, was built in 1671 by John Lovin, who also restored the bishop’s palace shortly after the restoration of King Charles II. The Guildhall stands on columns, providing an open ground floor for the butter and poultry markets that were once held there.

The Dean and Chapter of Peterborough Cathedral, who had succeeded the abbot as lords of the manor after the dissolution, retained their own court leet until the municipal borough was incorporated in 1874 with a mayor, six aldermen and 18 councillors.

Peterborough became a modern city with the arrival of the railways in the 19th century, and became an industrial centre known for brick manufacture. The railway enabled large-scale brick-making and distribution to develop, and the area remained Britain’s leading producer of bricks for much of the 20th century.

Perkins Engines was established in Peterborough in 1932 by Frank Perkins, creator of the Perkins diesel engine.

The Market Place was renamed Cathedral Square and the adjacent Gates Memorial Fountain moved to Bishop’s Road Gardens in 1963, when the then weekly market was moved to the site of the old cattle market.

Peterborough was designated a New Town in 1967, and the city’s population grew by almost 50% the two decades between 1971 and 1991. Queensgate shopping centre was opened by Queen Beatrix of the Netherlands in 1982, Thomas Cook and Pearl Assurance moved to Peterborough an urban regeneration company was put in place, with a £1 billion redevelopment of the city centre.

Below the cathedral, Peterscourt on City Road was designed by Sir George Gilbert Scott in 1864, housing Saint Peter’s Teacher Training College for men until 1938. The building is mainly listed for the 18th century doorway, which was brought from the Guildhall in London following war damage.

The Diocese of Peterborough covers about 3,100 sq km (1,200 square miles), including the Northamptonshire, Rutland and Peterborough, but parts of the city south of the river, which were once in Huntingdonshire, are in the Diocese of Ely, which includes the rest of Cambridgeshire and much of west Norfolk.

Peterborough Cathedral is one of the most intact large Norman buildings in England and is renowned for its imposing early English Gothic West Front which, with its three enormous arches, is without architectural precedent and with no direct successor.

But more about Peterborough Cathedral later this week, hopefully, and some of the other buildings I visited in Peterborough this week. 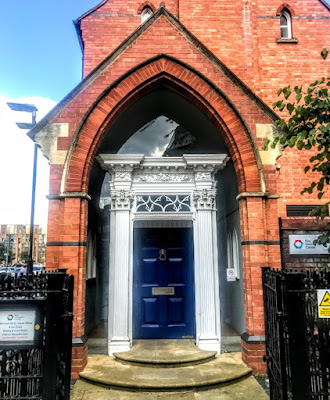 The 18th century doorway of Peterscourt was brought from the Guildhall in London following war damage (Photograph: Patrick Comerford, 2019)