I don’t actually believe it,
but I have seen a place
called Litchfield Street 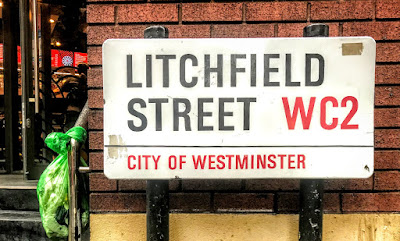 I don’t want to sound like Victor Meldrew in the BBC sitcom One Foot in the Grave. But I simply could not believe it.

Someone from Lichfield recently posted on a Lichfield social media platform a photograph of a street sign in London that declared the name of a street: Litchfield Street.

There is a place called Litchfield in Antarctica, a handful in Australia, and a larger number in the United States, most notably in Connecticut.

But surely everyone in England – apart from a handful of people in a remote part of Hampshire – knows that the name of the cathedral city in south-east Staffordshire is spelled Lichfield and not Litchfield.

Dictionaries owe their provenance and existence to Samuel Johnson, and the cultural contributions of Lichfield to civilised life in the English-speaking world include Erasmus Darwin, David Garrick, Anna Seward and Maria Edgeworth.

Could anyone call a street in London ‘Litchfield Street’ – unless they had spent some time in the Antipodes or Antarctica?

And then I saw it for myself, with my own two eyes.

There is a street in the City of Westminster that is actually called Litchfield Street, and I saw it yesterday as I was walking along Charing Cross Road.

Litchfield Street is close to Covent Garden, Soho and Trafalgar Square. Today it is only half its original length. and the street runs west-east from Charing Cross Road in the west to West Street in the east.

I wondered. Is it named after Litchfield Island in the Palmer Archipelago near the South Pole, one of the places named Litchfield in America, or, perhaps, even after tiny, almost unnoticeable Litchfield in a remote corner of Hampshire.

So, I checked it out.

It appears Litchfield Street off Charing Cross Road was named after Edward Lee (1663-1716), 1st Earl of Lichfield, who married Lady Charlotte Fitzroy, daughter of King Charles II and Barbara Villiers, Duchess of Cleveland. He was related by marriage to the Duke of Grafton, who gave his name to nearby Grafton Street.

Litchfield Street today is only half its original length. It once stretched west as far as King Street, now part of Shaftesbury Avenue. The houses on the north side of the street west of No 24 and all the houses on the south side were bought and demolished by the Metropolitan Board of Works in 1881-1886 to build Charing Cross Road.

The first building leases on this street were granted by Nicholas Barbon in October 1684, and the street first appears by name in the following year. The development of the street was completed by 1691.

Litchfield Street may have been more fashionable than the other streets on the Newport Ground estate, and the early residents included several knights and titled ladies.

A large number of Huguenots, including some skilled craftsmen, were living in the street by the mid-18th century. They included goldsmiths and plate-workers as well as Peter de la Fontaine, who ran a shop known as the ‘Golden Cup’ and whose trade card as designed by William Hogarth (1697-1764), nest known for A Rake’s Progress.

Hogarth also said to have painted the ceiling of the principal room of the first floor at No 3 Litchfield Street, now demolished.

Saunders Welch, High Constable of Holborn and a Justice of the Peace, ran a metropolitan public office at No 21 from 1763 to 1770. Indeed, he was a friend of Samuel Johnson from Lichfield … the real Lichfield.

Today, Le Beaujolais is hidden away at 25 Litchfield Street. Its claims it is steeped in history and that it has managed to stay in French hands ever since World War II. It says it is London’s oldest French wine bar and ‘a bastion of all that is French.’ Indeed, it describes itself as ‘a little piece of France tucked away in the heart of London.’

Bunjies Coffee House and Folk Cellar, one of the original folk cafés of the 1950s and 1960s, was located at 27 Litchfield Street.

As for Edward Lee, he was given the title of Earl of Lichfield in 1674. He was only an 11-year-old at the time, but he had become engaged to Lady Charlotte Fitzroy, one of the six children born to the king’s mistress.

But, in the years that have passed, someone should have walked along Charing Cross Road and noticed that Litchfield Street ought to be Lichfield Street.

Litchfield Street off Charing Cross Road was named after the Lee family, Earls of Lichfield in the 17th and 18th century (Photograph: Patrick Comerford, 2019)