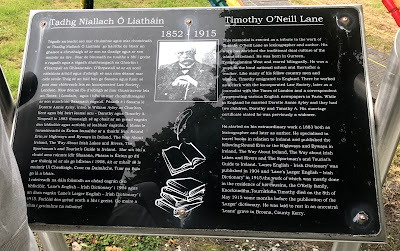 The plaque in Templeglantine commemorating Timothy O’Neill Lane and his contribution to Irish language and literature (Photograph: Patrick Comerford, 2019)

During the commemorations in Templeglantine last week celebrating the life of Max Macauliffe and his unique contributions to Sikh literature and studies, I noticed that this small West Limerick parish was also the birthplace of Timothy O’Neill Lane (1822-1915), who produced the first English-Irish dictionary of the 20th century.

Timothy O’Neill Lane (1822-1915), a teacher, clerk, lexicographer and journalist with the Times of London, was born in Co Limerick, and spent many years – and all of his money – travelling Ireland to compile a landmark dictionary. His English-Irish Dictionary, was first published in 1904, mainly at his own expense but with donations from Irish bishops and a small grant from the Government.

The plaque to mark the centenary of his death was unveiled in his native Templeglantine in 2015, and a headstone was erected at his grave in Brosna, Co Kerry. But his enormous contribution and dedication to Irish language and literature have remained relatively unknown.

A census in 1851 showed that 60 per cent of the adult population spoke Irish. O’Neill Lane was born in Gurteen, Templeglantine, in 1852, into a prosperous farming family and was raised bilingually, with a good grasp of the Irish language in his formative years.

He attended the local primary later taught at the school in Templeglantine for seven years before applying for the civil service. He passed the written examinations but failed the medical test. O’Neill Lane had been born with a deformed foot, which gave him a life-long limp. He wore specially made shoes and always travelled with a walking stick.

He persevered in seeking a change in career, however, and was appointed as a clerk to the Incorporated Law Society in London. Soon after he was appointed the Paris correspondent of the Times of London.

While he was working in Paris in the 1880s, O’Neill Lane began working on his dictionary. Following the example of Samuel Johnson’s first dictionary of English in 1755, Irish dictionaries were produced in the 18th and 19th centuries. But O’Neill Lane found them to be lacking.

His aim was to produce something that would better inform students of Irish. By the time he finally finished, in 1904, he had spent more than £2,500 – the equivalent of more than €325,000 today – to complete his project.

O’Neill Lane spent five years travelling around Ireland. During his travels, he also wrote a series of travel books while visiting Gaeltacht areas, where he collected words and phrases from local people. He found that words then thought to be obsolete were still in use in Munster and in other parts of Ireland, and he documented regional variations of Irish words and phrases.

The support for the dictionary was substantial. O’Neill Lane received a grant of £250 – the equivalent of €32,500 today – from the government to produce the book and had more than 650 advance subscriptions.

The majority of subscribers were clergy, but people from throughout Ireland, the US, Canada and Australia also gave their support.

As soon as his 581-page work was published, however, O’Neill Lane expressed dissatisfaction with it. By then, he given up his career in journalism and he partly blamed the shortcomings he identified in the first edition on his commitments in Paris.

Immediately, he began working on a second edition, and included in his first edition an appeal for corrections and omissions, with a prize of £25 for the person who provided him with the best information.

O’Neill Lane asked that corrections be sent to Tournafulla, near Templeglantine, where he later lived with his cousins. O’Neill Lane had married an Englishwoman, and they had a son and a daughter, but neither his wife nor his daughter ever visited Ireland. His son spent time at the school in Tournafulla and later edited an English-language newspaper in Shanghai.

The revised edition was 50 per cent larger than the first edition. Both editions made a vast amount of material available at a time when the Gaelic League was enjoying increasing popularity.

Although he received many subscriptions for the second edition, producing it left O’Neill Lane virtually penniless. The day before he died a copy of the dictionary arrived by train at his local station in Limerick. He laid his hands on it on his deathbed.

Timothy O’Neill Lane died at Tournafulla, near Templeglantine, on 8 May 1915, while he was staying with his Kelly cousins. He was buried in the ancestral grave of Leane family in Brosna, Co Limerick. His books and papers were donated to Mary Immaculate College, Limerick.

His dictionary was republished in enlarged editions in 1921 and 1922, and it has been reprinted many times since.