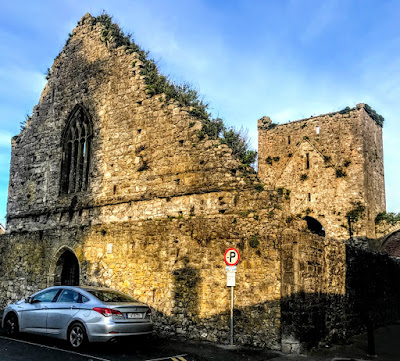 Saint Dominic’s Friary or Abbey, 300 metres south-east of the Rock of Cashel, was founded in 1243 (Photograph: Patrick Comerford, 2019)

Cashel is mainly known for the Rock of Cashel and Hore Abbey, founded for the Cistercians, and as visitors walk back into the town, many miss Saint Dominic’s Friary or Abbey in a housing estate 300 metres south-east of the Rock of Cashel.

Saint Dominic’s Abbey was founded in 1243, during the reign of Henry III, by the Archbishop of Cashel, David mac Cellaig Ó Gila Pátraic, probably a member of the MacGillapatrick (FitzPatrick) dynasty of Ossory and a key figure in building the cathedral on the Rock of Cashel.

Cashel Priory was the third foundation of the Dominican order in a borough in Ireland, following Mullingar, Co Westmeath (1237), and Athenry, Co Galway (1241).

Bishop David mac Cellaig is thought to have joined the Order of Preachers or Dominicans at their priory of Cork. He later became Dean of Cashel before 1237, and Bishop of Cloyne soon after the friars came to Ireland.

As Primate of Munster, the archbishop ordered the Bishop of Limerick to resign, accusing him of simony, illegitimacy and ignorance, a decision eventually enforced by the Pope.

King Henry III wrote to the Archbishops of Dublin and Cashel in 1250, asking that the Crusades be preached in Ireland and to allow royal officials to collect money for the Crusades. He also told the Archbishop of Cashel that after the publication of the Pope’s letters, which Walter Maunsel is bringing to the archbishop, it is placed in the custody of the Friars Preachers of Cashel.

The archbishop died on 2 March 1253 and was buried in a chapel in the cathedral on the Rock of Cashel. Some sources suggest that the carving of the bishop now on Miler McGrath’s tomb was originally on the tomb of Archbishop McKelly. 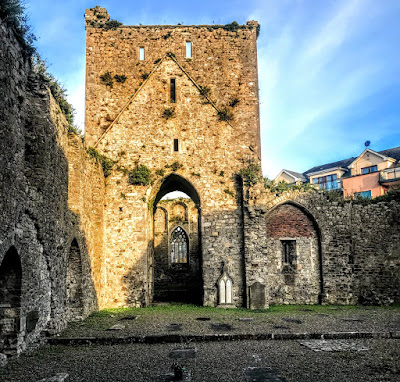 Cashel Abbey was rebuilt by Archbishop John Cantwell of Cashel at his own expense in 1480 (Photograph: Patrick Comerford, 2019)

After a fire destroyed the abbey, perhaps during an armed conflict, it was rebuilt and refurbished by John Cantwell, Archbishop of Cashel, at his own expense in 1480. Archbishop Cantwell was named both patron and co-founder of the abbey in a document signed at a chapter meeting in Limerick ca 1480. The chapter also declared that Cantwell and all assisting his work would be beneficiaries of all the prayers of the Dominicans in Ireland.

At the Dissolution of the monastic houses at the Reformation, Edward Brown, the last Prior of Cashel, surrendered Cashel Priory on the Vigil of Easter, 8 April 1540. Cashel Priory was then leased to Peter Kelly and Walter Fleming. It included a church and belfry, a dormitory, a chamber with two cellars, a cemetery, two orchards, and two parks or gardens containing two acres.

A court sitting in 1541 found that the priory buildings had been sold, and that other possessions of the priory included an orchard, three gardens and a cemetery, as well as nine tenements or cottages with six gardens within the precinct, and two messuages with four gardens outside of it. The convent precinct or the walled site and surrounding gardens extended to two acres. By comparison, Trim Priory in Co Meath had four acres, while Waterford Priory had only half an acre. 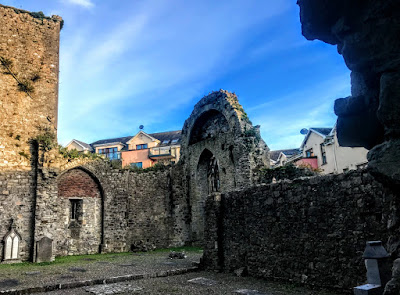 Cashel Priory was once regarded as the most beautiful Dominican building in Ireland (Photograph: Patrick Comerford, 2019)

In its day, Cashel Priory was regarded as the most beautiful Dominican building in Ireland. What remains today are the massive central tower and the main walls with traceried windows in the east and west gables and in the south transept. These windows were probably inserted in the 15th century, during the rebuilding.

The abbey is quasi-cruciform in plan with a high tower over the crossing. It has only one aisle and transept.

The priory was rebuilt by John Cantwell in 1480, when the central tower was added. During the 15th century renovations, the great east window was replaced. Notable features include the nine lancet windows in the choir, and the 15th-century windows that were inserted in place of 13th-century lancets in the choir, transept and west wall of the nave. These are four- and five-light windows with curvilinear tracery in the choir and the transept, and a four-light window with modified switch-line tracery and round-headed sub-arches in the west wall of the nave.

The south wall of the east section had nine lancet windows, but today only their pillars remain. The north wall in this section shows traces of niche tombs.

A niche in the north wall of the nave has two carved figures. One shows an infant standing, with his arms bent and his hands on his stomach; the slab is broken and the feet are missing. His eyes are closed. The other figure is a head that may have a crown; no face features survive.

Some corbels on the outer side of the north wall may be the remains of the former cloister. 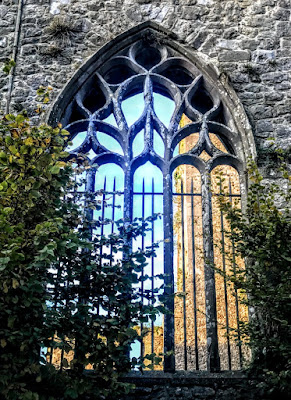 After the Reformation, distinguished members of the Dominican community in Cashel included a Father Hackett, who was theologian to Cardinal Emilio Bonaventura Altieri (1590-1676), later Pope Clement X (1670-1676). Hackett is said to have been ‘so humble and poor in spirit’ that he refused to accept a bishopric.

Patrick Hackett, of the same community, studied at Louvain and was later Prior of Cashel.

Dominic Kent from Cashel became Lecturer in Philosophy in Louvain later became a chaplain in the French army. He returned to Louvain, where he died in 1703.

William O’Dwyer studied theology in Portugal and also taught philosophy in Louvain. Back in Ireland, he became Prior of Waterford and was later an army chaplain. He then went to Rome and to Portugal and died at Civita Vecchia.

Mark Boyton studied in Louvain and Cremona, and became a distinguished preacher in Italy, where he was the confessor of the Princess de Vaudimont. He died in Milan in 1704.

Peter Butler studied in Louvain and then became a parish priest in the diocese of Poitou in France. When his father died, he received permission to join the Canons Regular of Saint Augustine.

Thomas de Burgo, in his Hibernia Dominicana in 1755, described the Dominican houses in Cashel and Ballindoon as the best preserved of all Dominican monasteries in Ireland.

Five Dominican priests were still attached to the convent in Cashel in 1756. But there was only one remaining friar by 1800. The last Dominican in Cashel, Father John Conway, was still there in 1850, without a priory. He was first recorded in Cashel in 1829, later recorded as ‘Prior of Cashel’ in 1844 and 1848, and Prior of Thurles in 1846-1847, although there was no Dominican house in Thurles. He died in Cashel sometime between 1863 and 1866. 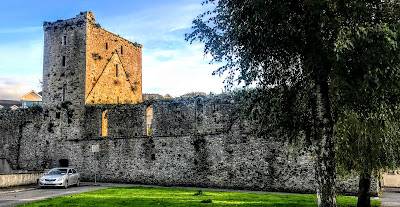 John Conway, the last titular Prior of Cashel, died in the 1860s (Photograph: Patrick Comerford, 2019)