Cashel Cathedral, the
Georgian replacement
for the Rock of Cashel 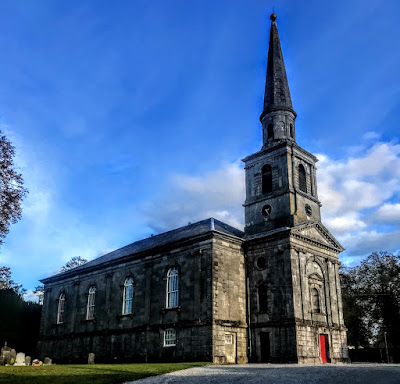 The Cathedral Church of Saint John the Baptist and Saint Patrick’s Rock in Cashel … one of just two Anglican cathedrals built in Ireland and Britain in the 18th century (Photograph: Patrick Comerford, 2019)

After visiting the Rock of Cashel on Monday afternoon [28 October 2019], I walked through the centre of Cashel and visited the Cathedral Church of Saint John the Baptist and Saint Patrick’s Rock, the Church of Ireland cathedral in Cashel and one of the six cathedrals in the United Dioceses of Cashel Ferns and Ossory.

The cathedral forms a nationally important campus with the library, gates and gate lodge. The tall spire makes the cathedral visible from afar and is an imposing part of the townscape of Cashel.

The Church of Ireland continued to use the mediaeval Gothic cathedral on the Rock of Cashel until 1749, when the site was finally abandoned by Archbishop Arthur Price (1744-1752) and the cathedral roof was removed.

However, Price’s successor, Archbishop John Whitcomb (1752-1753), was enthroned in both cathedrals in 1752. Nevertheless, the old parish church was razed, the foundation stone of a new cathedral was laid in 1763, and the present Gregorian Cathedral was opened on Christmas Day 1783. It was finally completed in 1788, largely due to the efforts of Archbishop Charles Agar (1779-1801), later Archbishop of Dublin (1801-1809) and 1st Earl of Normanton.

This is one of just two Anglican cathedrals built in Ireland and Britain in the 18th century, the other being Christ Church Cathedral, Waterford. It is said to have been designed by Sir Richard Morrison (1767-1849), but the names of the architects of the main building remain unknown. 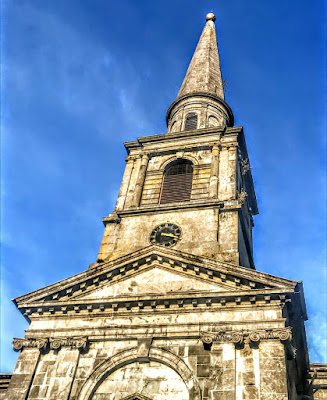 The spire was added by William Vitruvius Morrison in 1812 (Photograph: Patrick Comerford, 2019)

The Georgian style of the cathedral is seen in the regular form, the hipped roof and the round-headed openings, as well as the incorporation of Classical elements such as the aedicule, pediment and pilasters. Indeed, its Classical elegance makes no concessions to the mediaeval past.

The cathedral is built of grey stone, and it has arched windows and a cushioned frieze supported by Ionic pilasters which, however, are omitted on the opposite, less conspicuous, south side.

The curiously unfinished south side of the entrance front, and the different elevations to the long north and south walls, are all of particular interest and perhaps reflect a desire to lavish attention on the parts of the building immediately visible on the approach from John Street. 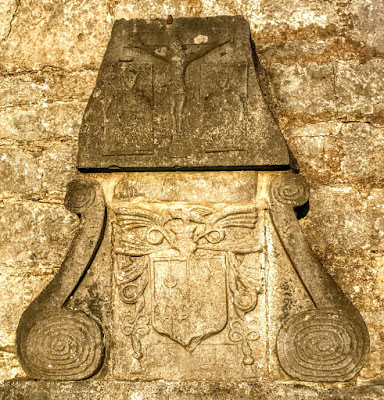 A monument on the front wall of building is a composite of a mediaeval crucifixion plaque and an heraldic plaque (Photograph: Patrick Comerford, 2019)

A monument on the front wall of building is a composite of a mediaeval crucifixion plaque and an heraldic plaque with later details.

The spire was added in 1812 by Sir Richard Morrison’s son, William Vitruvius Morrison (1794-1838), who was born in Clonmel, Co Tipperary. The chancel was remodelled in a gilded elaborate Italian Romanesque style by William Atkins.

Although the building is plain outside, it has a pleasant Georgian-style interior, and there is fine stone crafting throughout the building, and the organ was built by Samuel Green in 1786. However, the original interior was remodelled in 1867, and little of it remains apart from the west gallery with its stalls. An unusual legacy of the Victorian reordering is that is one of the few cathedrals with two sets of chapter stalls.

The cathedral stands in a graveyard and on the site of the mediaeval parish church with a variety of mediaeval effigies and grave-slabs, and a fine collection of elaborate limestone tombs. 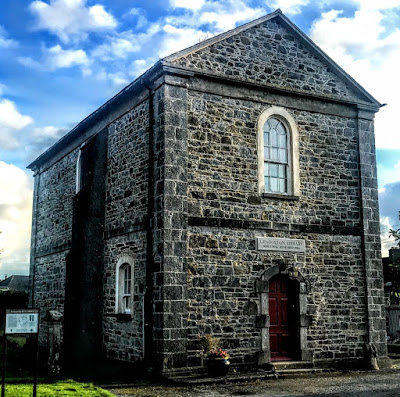 The Chapter House beside the cathedral once housed the Bolton Library (Photograph: Patrick Comerford, 2019)

Until February 2016, the 19th century Chapter House beside the cathedral was home to the GPA Bolton Library, with a rare collection of books and manuscripts.

The library was founded by Archbishop Theophilus Bolton (1730-1744). The library’s greatest treasures came from the collection of Archbishop William King of Dublin, who had been Bolton’s mentor and who was said to have been the most learned and widely read man of his time.

King had been Bishop of Derry from 1690 to 1703 when he became Archbishop of Dublin. His best-known publication, De Origine Mali (1702) is said to have inspired Alexander Pope’s Essay on Man. Soon after King’s death in 1729, Bolton acquired the bulk of his benefactor’s extensive library.

The library was originally housed in the Long Room, beside the Archbishops’ Palace, built by Archbishop Bolton in 1830. It suffered some damage from soldiers quartered there during the 1798 rebellion, but it survived this and other crises without further incident. 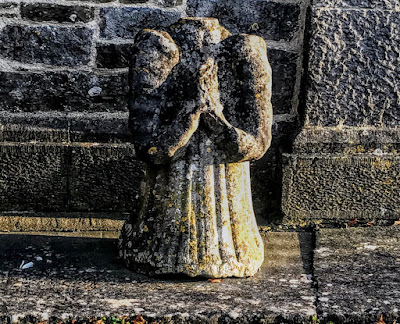 The remains of a mediaeval monument in front of the former Bolton Library (Photograph: Patrick Comerford, 2019)

Henry Cotton, who became Archdeacon of Cashel in 1824, had been the sub-librarians of the Bodleian Library, Oxford, for nine years, and published his Typographical Gazetteer in the year his came to Cashel. Until he died in 1879, he devoted much of the rest of his life to writing and to working in the library in Cashel.

Cotton was alarmed by government plans in the 1830s to suppress the Archbishopric of Cashel. He encouraged the clergy of the diocese to build a new library and chapter house in the grounds of the cathedral. The library moved to its new home in 1837.

Sadly, the books in the library were suffering from the effects of being in a building never designed to provide them with the right conditions. In order to restore and conserve the collection, the Bolton Library was transferred to the University of Limerick in 2016. 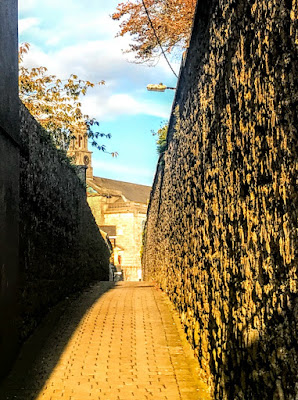 The cathedral perimeter walls date from the 13th century and part of the limestone boundary wall incorporates part of the mediaeval town wall.

Agar’s Lane was built by Archbishop Agar in 1795 to provide access between the cathedral and the new Roman Catholic Parish Church of Saint John the Baptist, built in 1772-1804 on the site of the former Franciscan Friary on Friar Street and re-fronted in 1850.

Archaeological excavations in 1999-2000 uncovered the original cobbled surface of the laneway. 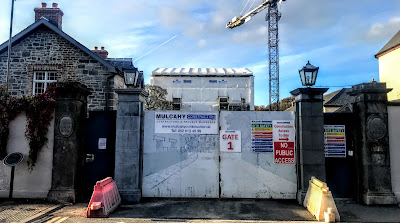 The Cashel Palace Hotel is being refurbished and rebuilt (Photograph: Patrick Comerford, 2019)

The cathedral looks down John Street towards the centre of the town and the Cashel Palace Hotel, built as his episcopal palace by Archbishop Bolton in 1730. It was designed by Sir Edward Lovett Pearce (1699-1733) and was once the home of the Archbishops of Cashel.

Two Mulberry trees in the gardens are said to date from the reign of Queen Mary.

The palace was once one of the finest houses in Ireland. The palace and its gardens were sold in 1959 and it became the Cashel Palace Hotel in 1962. The hotel is now being refurbished and rebuilt and it was not possible to visit it this week.

The Roman Catholic Cathedral for the diocese is the Cathedral of the Assumption, Thurles, Co Tipperary, designed by JJ McCarthy and built in 1865-1879. 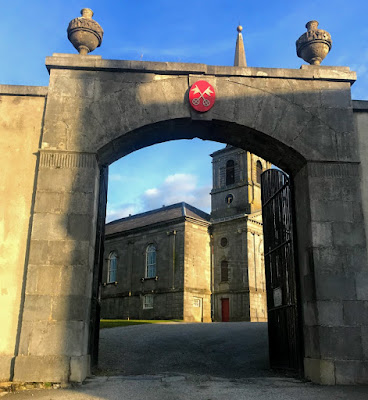 The cathedral was completed in 1788, largely due to the efforts of Archbishop Charles Agar (Photograph: Patrick Comerford, 2019)