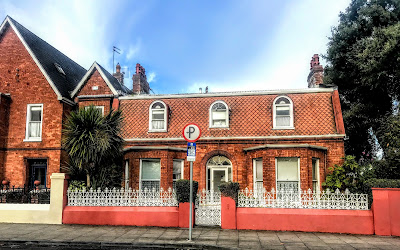 In advance of my lecture in Saint Mary’s Cathedral, Limerick, earlier this week on the philosopher Elizabeth Anscombe, I spent time walking along Clancy’s Strand in search of Glanmire House, the house on the Strand where she was born 100 years ago in 1919.

I tried to search for the name and number of every house, while trying to be discreet, hoping no-one would think I was being obtrusive or unnecessarily intrusive.

However, I failed to find Glanmire House. Perhaps the name of the house has been changed, or the house itself has been demolished. The Anscombe family was not living in Limerick in 1901 or 1911, so the census returns are not going to help me here. Nor did I have time on Tuesday morning to go through old street directories to identify the location of Glanmire House.

But, in my search, I came across an interesting row of highly individualistic late Victorian and Edwardian red-brick houses on Clancy’s Strand, close to the former Strand Barracks, and a once-elegant, three-storey, Georgian red brick townhouse that is in danger of being lost as part of Limerick’s architectural heritage.

Clancy's Strand on the bank of the River Shannon is a pleasant, tree-lined street of 18th and 19th century houses, many of them still presenting the same appearance they had in the early 1900s.

Les Charmilles on Clancy’s Strand is a three-bay, single-storey house, that was built ca 1910, and that is distinguished by a dormer mansard roof and a centrally-placed front door that is flanked by three-sided canted bay windows.

This attractive house has retained most of its original features, including the rare scalloped metal weather-hung tiling.

The mansard roof has painted metal scalloped weathering tiles on the lower span and a replacement, powder-coated corrugated metal upper section that dates from ca 2000. There are interesting, round-arched metal-lined dormer windows, a moulded red-brick eaves course, red-brick chimneystacks at the gables, with stringcourses and elaborate clay pots.

A flight of granite steps and path of encaustic tiles lead up to the porch.

The neighbouring house, Mignon, is a two-bay, two-storey red brick house, built ca 1890. This is an unusual house distinguished by its steep gables at its façade. Although the original roof has been replaced, it retains all the original windows and is an interesting part of the houses facing the River Shannon. 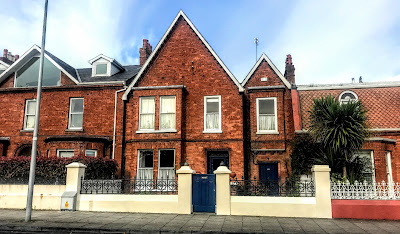 Mignon is distinguished by its steeply pitched gabled front elevation with a recessed gabled single-bay elevation on the north-east. There is a corbelled oriel window over the door to the rear site.

The house has a two-storey three-sided red brick bay window with a moulded brick stringcourse delineating floor levels, paired square-headed openings with red brick flat arches, and an oriel window in the recessed bay with a limestone plate base supported by moulded brick corbels.

The porch has two limestone steps flanked by red brick plinth walls and there is a tiled path leading up to the steps.

However, another interesting house on Clancy’s Strand, Curragower House, is in a sad state of neglect and many wonder whether it beyond repair.

Curragower House, built ca 1780-1800, is a fine Georgian, three-storey, red-brick merchant townhouse. The simplicity of its design and the lack of decoration exemplifies a purity in architecture in the late 18th century.

But Curragower House has been unoccupied for the past 20 years and has fallen into disrepair so that it is now in a disastrous state. The current owners plan to demolish Curragower House to make way for a block of three apartments, a private dwelling and a café in a style that many critics argue is out of character with its surroundings.

A spokesperson for An Taisce Limerick recently told The Journal the proposed development ‘undermines the architectural and historical integrity of Clancy Strand; it will be wedged in between two early 18th century buildings and be directly opposite the 12th century King John’s Castle.’

An Taisce wants the building to be granted protected status and the Irish Georgian Society says Curragower House is ‘architecturally significant’ and should be restored.

Last month, Limerick City and County Council passed a resolution to add Curragower House to Record of Protected Structures and that may eventually block any changes to the exterior of the building. 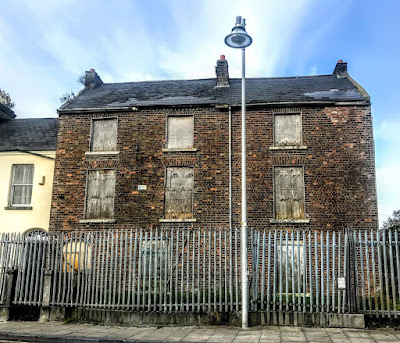 Curragower House on Clancy’s Strand is in a sad state of neglect (Photograph: Patrick Comerford, 2019)