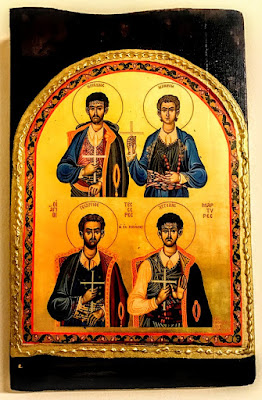 An icon of the Four Martyrs of Rethymnon by Alexandra Kaouki now in the Rectory in Askeaton (Photograph: Patrick Comerford, 2019)

One of the icons I moved from the bookshelves in my study at the Church of Ireland Theological Institute to the Rectory in Askeaton is a copy of the icon of the Four Martyrs of Rethymnon from the workshop of Alexandra Kaouki (Αλεξανδρα Καουκι) on Melissinou Street, beneath the slopes of the Venetian Fortezza in Rethymnon.

I have spent much time in Rethymnon for more than 30 years, and this icon represents the story, traditions and religious faith of the people of this town in Crete. The original icon by Alexandra Kaouki hangs above the desk of the Bishop Eugenios of Rethymnon in his office.

Last Sunday [17 November 2019], another version of Alexandra Kaouki’s Icon of the Four Martyrs of Rethymnon was given a special place of honour in my favourite monastery in Thessaloniki, the Holy Patriarchal and Stavropegic Monastery of Vlatadon. This monastery, where I spent Easter Day in the Orthodox calendar last year [8 April 2018], is associated with the families of the four martyrs.

The ceremony was organised by the Rethymnon Association of Attica, To Arkadi to mark their 90th anniversary (1930-2020). The attendance included people from Crete in traditional Cretan costume when as icon was blessed by Bishop Nikiforos of Amorion, who is the Abbot of Vlatadon, and Metropolitan Eugenios, Bishop of Rethymnon and Avlopotamos.

The Divine Liturgy also commemorated the 153rd anniversary the people who were burned to death at the Arkadi Monastery. 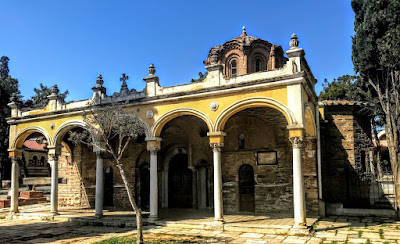 The Monastery of Vlatadon in the hills above Thessaloniki (Photograph: Patrick Comerford, 2018)

The Monastery of Vlatadon was founded between 1351 to 1371 by the Empress Anna Palaeologus and was named after two monks from Crete, Dorotheos and Markos Vlattis, two of the closest friends of Saint Gregory Palamas, Archibishop of Thessaloniki.

The monk Dorotheos returned with Saint Gregory to Thessaloniki and took up permanent residence in the city. He later became Archbishop of Thessaloniki from 1371 to 1379. His brother Markos travelled to Mount Athos, where he lived as a monk at the Great Lavra, but he too returned to Thessaloniki in 1351, when the brothers founded the Monastery of the Pantocrator at Vlatadon.

The Four Martyrs of Rethymnon were members of the Vlatakis family, which claimed descent from the same family as the monks Dorotheos and Markos Vlattis from Crete who gave their name to the Monastery of Vlatadon. 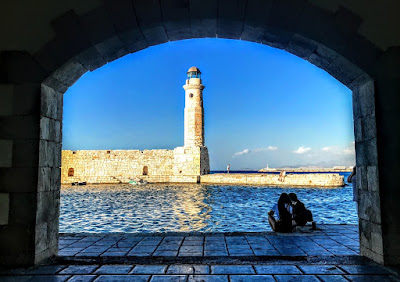 The Venetian Harbour seen from the old Customs House in Rethymnon … the Four Martyrs were held prisoners here for four months in 1824 (Photograph: Patrick Comerford, 2018)

At first, Mehmet Pasha tried to convince the four to convert to Islam, promising high offices, honours and gifts. But they refused to engage in any discussion, insisting: ‘Christians we were born, Christians we want to die.’ 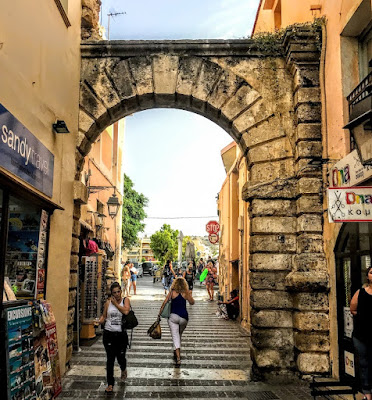 The Four Martyrs were executed outside the Porta Guora, the Venetian gate that marked the entrance to the old town of Rtehymnon (Photograph: Patrick Comerford, 2018)

Kneeling in the open space outside the Porta Guora gate, with their hands tied, they saw their executioner holding his sword, and heard him ask: ‘Will you adopt the Turkish faith?’

The standard answer was a humble ‘Yes, my Lord.’

But instead the first man in line surprised everyone with a scornful ‘No.’

A few seconds before his head was cut off, he added: ‘I was born a Christian and a Christian I will die.’

The sword of the executioner came down four times and beheaded the four men. As each was executed, his dying words were: ‘Kyrie Eleison (Lord have mercy).’ 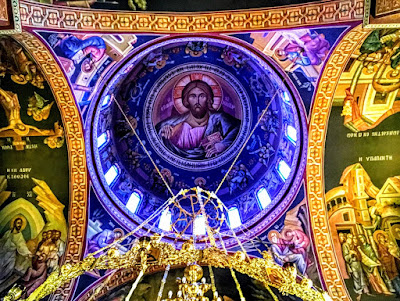 Christ the Pantocrator in the dome in the Church of the Four Martyrs in Rethymnon (Photograph: Patrick Comerford, 2019)

Nikolaos later married Maria Kolatsidakis from the village Kouse, and he settled there as a carpenter. They had four children who became known as the maragakia or ‘little carpenters,’ and eventually their surname became Maragakis. One of those four children, Emmanuel, later returned to Melambes, where he resumed the name Vlatakis. But he was also known as Letzomanolis, a combination of his mother’s surname and his own first name.

The church is a fashionable venue for baptisms and weddings at weekends. It was here I attended the celebrations of Good Friday and Easter in the Orthodox calendar earlier this year [2019]. 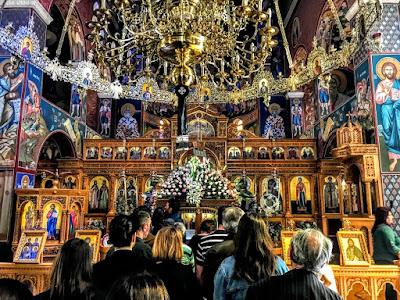 Inside the Church of the Four Martyrs in Rethymnon on Good Friday (Photograph: Patrick Comerford, 2019)