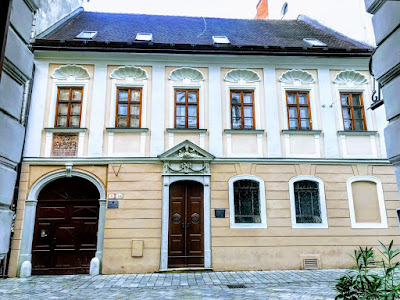 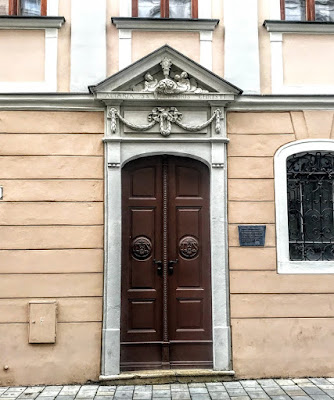 The entrance to the Corpus Christi chapel in Bratislava (Photograph: Patrick Comerford, 2019)

I was staying at the Astoria Hotel, close to the Franciscan Church and the former Ursuline convent in the heart of the Old City, which stands on the site of the old, mediaeval synagogue in Bratislava.

The synagogue was mentioned in 1335, when Pope Benedict XII reported to the Archbishop of Esztergom that the neighbouring Cistercian monks had complained they were being disturbed at prayer in their chapel by the sounds coming from this synagogue.

The Cistercian cloister stood near today’s church on Uršulínska Street with the synagogue beside it. The Pope had the Archbishop investigate the situation and the synagogue was demolished soon afterwards. The Arcadia Hotel where I was staying is immediately west of this street corner.

The synagogue was rebuilt in 1339, and in the mid-14th century several hundred Jews were living in Bratislava and the city. They had a synagogue, a Jewish cemetery, a mikveh bath and other public Jewish institutions.

The Jews were expelled from Bratislava for the first time in 1360, and the synagogue was destroyed. Several Jewish families had returned to the city by 1368, and they were given permission in 1399 to build a synagogue, probably on the site of the earlier one. By the end of the 14th century, about 800 Jews were living in the city, which had a total population of 5,000 by 1435.

All that remains of this mediaeval synagogue in Bratislava is the Gothic entrance portal, which was discovered during the restoration of a house in the heart of the Old Town in the 1990s.

It is located at the back of the courtyard of the Corpus Christi Chapel compound or Kaplnka Kristovho tela, on Panská street. Although I did not get to see the courtyard and the portal last month, I passed this house a number of times during my visit to Bratislava.

It is interesting that Corpus Christi as a name or dedication was a typical invocation throughout mediaeval Europe used for synagogues that had been confiscated from Jewish communities and turned into Christian churches or monastic houses, for the Judenhof, a special house inhabited by Jewish residents, stood nearby in the Middle Ages.

The name of Corpus Christi is associated with alleged desecrations of the Eucharistic Host, which were common libels against Jews in the Europe during the Middle Ages.

These libellous charges resurfaced in Pressburg, as Bratisalava was known, in 1591, when a broadsheet circulated in Europe reporting miraculous events in the city centuries after accusations that Jews there had a host. Corpus Christ Chapel was then built on the site where this event was said to have taken place.

The street façade looks like a terraced, Baroque-Classicist house and does not look like a church. So, looking at the building from Penska street, I never ventured inside in my search for the portal of the mediaeval synagogue.

The site belonged to the Brotherhood of Corpus Christi, who were established in 1349 and who founded their first house here in 1396.

The carved relief above the entrance is dated 1627, just a few decades after the libel of desecrating the host spread throughout Pressburg. This carving shows the crucified Body of Christ rising above an altar, with adoring angels on each side, a reference to the dedication to Corpus Christi.

The relief also has a lengthy inscription and the coat of arms of János Telegdy or Ján Telegdy (1575–1647), then Archbishop of Kalocsa (1623-1647) in Hungary. He was born in Nové Zámky, now in south-west Slovakia, about 100 km from Bratislava.

The house was radically rebuilt by the master builder Matej Walch in 1772, and the main wing was moved to the street frontage. Inside, baroque decoration with allegorical paintings date from the second half of the 18th century.

The house and the chapel passed to the Jesuits in 1850, and their insignia can be seen at the entrance.

I do not know how the portal from the synagogue came to be moved to the courtyard of this building, but it was discovered during renovations in the 1990s. It is no coincidence that a portal from a synagogue should be found in a building whose name is associated with these anti-Semitic libels, and I regret that I was not pushy enough to make my way into the courtyard last month. 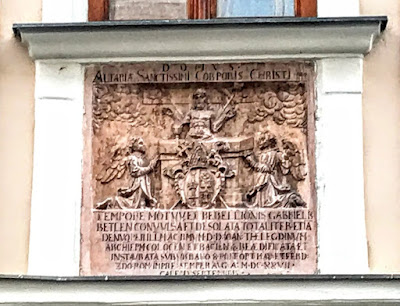