I am visiting London next week to attend a reception for priests and rabbis and the launch of prayers to mark Holocaust Memorial Day this year, which also marks the 75th anniversary of the liberation of Auschwitz on 27 January 1945 and other concentration camps.

It is only an educated guess, but still only a guess on my part that a Hungarian-born Elizabethan Archdeacon of Glendalough, John Wolpe, also known as John Vulpe, was of Jewish birth or descent. He had qualified as a physician, but was never ordained, and may never even have lived in Dublin. He was deprived for non-residence in 1569, and was succeeded by John Ball. Archbishop Adam Loftus sought to have him restored to office in 1577, but this never happened.

Whatever Wolpe’s – or Vulpe’s – background may have been, I am aware of at least five Jewish-born priests who have worked in the Church of Ireland, albeit in some cases for very short times. One was born in Germany: Joseph Wolff; two were born Jews from Poland: Michael Solomon Alexander and Moses Margoliouth; one was born in Prague: Adolph Paul Weinberger; and the fifth was born in England: William Michael Mayers.

The Revd Joseph Wolff (1795-1862), known as ‘the missionary to the world,’ was born at Weilersbach, near Bamberg in Germany. His father, David Wolff, was a rabbi in Weilersbach by 1790, and also served as a rabbi in in Kissingen, Halle upon Saale und Uehlfeld, and in Jebenhausen, Württemberg, between 1804 and 1807.

Joseph Wolff was converted to Christianity through reading books by Johann Michael von Sailer, Bishop of Regensburg. He was baptised by the Benedictine Abbot of Emaus, near Prague, in 1812.

Wolff became a keen Oriental scholar and studied theology in Tübingen and Rome, with the admitted ambition of becoming Pope. He later claimed he was expelled from the Collegio di Propaganda in 1818 for attacking the doctrine of infallibility and criticising his tutors.

After staying in the Redemptorist monastery at Val Sainte, near Fribourg, Switzerland, he moved to London. He investigated the Baptists, Quakers and Methodists before eventually joining the Church of England, and then resumed his Oriental and theological studies at Cambridge.

Wolff worked as a missionary Egypt, the Sinai Peninsula, Jerusalem, Aleppo, Mesopotamia, Persia, Georgia and the Crimea from 1821 until he returned to England in 1826. He married Lady Georgiana Mary Walpole, a descendant of the Prime Minister Robert Walpole, on 26 February 1827.

Wolff toured Ireland for a year in 1827, promoting his evangelical missionary among Jews in Jerusalem and the Middle East. He left in 1828, to set out in search of the Lost Tribes of Israel, travelling through Anatolia, Armenia, Turkestan and Afghanistan to Simla and Calcutta. He travelled throughout India, including Madras, Goa and Bombay, before returning to England through Egypt and Malta.

Later, he visited Ethiopia, Jeddah, Yemen and Bombay, before going to the US, where he was ordained an Episcopalian deacon on 26 September 1837 in Newark, New Jersey.

He was soon back in Ireland, where Trinity College Dublin awarded him an honorary Doctorate of Laws, and he was ordained priest in 1838 by Richard Mant, Bishop of Down and Connor. That year, he was appointed Rector of Linthwaite in Yorkshire.

Wolff set off on a mission to Bukhara, home of the Bukharan Jews, in 1843 to rescue two kidnapped British officers. But Colonel Charles Stoddart and Captain Arthur Conolly had been executed and Wolff was spared death himself only because the Emir laughed uncontrollably at Wolff’s appearance in full canonical garb.

When Wolff returned to England in 1845, he became Vicar of Isle Brewers, Somerset. He married his second wife, Louisa Decima, a rector’s daughter, in 1861, but died in 1862. 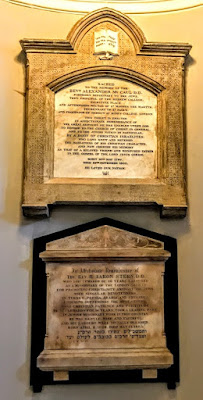 Michael Solomon Alexander (1799-1845), who was in Dublin at the same time as Wolff, was a former rabbi who later became the first Anglican Bishop in Jerusalem.

He was born Michael Solomon Wolff on 1 May 1799 in Schönlanke in South Prussia, now Trzcianka in Poland, the second son and one of five children of Alexander Wolff. His ancestors may have come to Prussia from England or may have been in Schönlanke for many generations.

His parents raised him in the strict principles of Orthodox Judaism, and by the age of 16 he was a teacher of the Talmud and of German language. In 1820, before he was 21, he moved to London to teach the Talmud and to perform the duties of a shochet or Jewish ritual slaughterer.

He became a private tutor to a Jewish family in Colchester, and then was appointed a rabbi in Norwich, where he first encountered the work of the London Jews’ Society and obtained a copy of New Testament.

Michael Alexander married Deborah Levy in Plymouth in 1821, and there he was appointed a rabbi. Meanwhile, his brother had become a rabbi in Posen (Poznan). But he was dismissed as a rabbi, and he was baptised in Saint Andrew’s Church, Plymouth, on 22 June 1825.

When his wife was baptised, they moved to Dublin, where he taught Hebrew and was appointed secretary to the Irish branch of the London Jews’ Society. Archbishop William Magee persuaded him to train for ordination, and he was 28 when he was ordained deacon on Trinity Sunday 1827 in Saint Ann’s Church, Dublin, with a second Jewish convert, William Michael Mayers. He preached his first sermon that evening in Sandford Church, Ranelagh.

He was ordained priest by Charles Dalrymple Lindsay, Bishop of Kildare and Dean of Christ Church Cathedral Dublin, in December 1827. Although TCD would later confer an honorary doctorate on him, he did not remain in Dublin. He worked as a missionary among Jews, first in Danzig (1827-1830), and then in London (1831-1841).

He was Professor of Hebrew at King’s College London (1832-1841) and helped the Revd Alexander McCaul (1799-1863) of CMJ to revise the mission’s translation of the New Testament into Hebrew (1835) and to translate the Book of Common Prayer into Hebrew. McCaul was born in Dublin and educated at TCD.

The British and Prussian Governments agreed with the Church of England and the Evangelical Church in Prussia in 1841 to establish a Protestant Bishopric in Jerusalem. Perhaps on McCaul’s suggestion, Alexander was appointed ‘Bbishop of the United Church of England and Ireland in Jerusalem.’ He was ordained bishop at Lambeth Palace on 7 December 1841, when Alexander McCaul preached the sermon.

He arrived in Jerusalem in January 1842, but his three years in Jerusalem were marked by controversy. He antagonised both the local Jewish leadership and the leaders of the other major churches, who consolidate their presence in Jerusalem. However, he lived in Jerusalem for only three years, and died suddenly in 1845 in Egypt while he was returning to England. 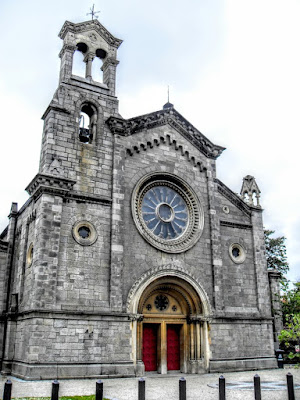 Canon William Michael Mayers, who was ordained deacon with Michael Solomon Alexander in Saint Ann’s Church Dublin 1827, was born a Jew in Great Yarmouth. After his conversion, he studied at Saint Catharine’s College, Cambridge. He served curacies in the Free Church, Dublin, Arklow, Co Wicklow, and Maynooth, Co Kildare, before he was appointed Prebendary of Mulhuddart in Saint Patrick’s Cathedral, Dublin, and Rector of Castleknock in 1830. He died in 1868.

The Revd Moses Margoliouth (1820-1881) was another controversial Jewish convert to Christianity who was also worked in the Church of Ireland.

He pursued Talmudic and rabbinical studies in Pryerosl, Grodno, and Kalwarya in the hope of becoming a rabbi, and also learned Russian and German. He married Chaja Goldberg (1818-1870), the daughter of a writer and historian, in 1834.

During a visit to Liverpool in August 1837, he read a Hebrew version of the New Testament, and he was baptised in the Church of England on 13 April 1838.

For a time, he made a living teaching Hebrew, but in January 1840 he entered Trinity College Dublin, to prepare for ordination, and during holidays studied at the Hebrew College, London. He taught Hebrew, German and English in Liverpool and on 30 June 1844 he was ordained deacon for Saint Augustine’s, Liverpool.

Three months later, Bishop Lindsay him to return to Dublin, had him ordained priest, secured his appointment as Vicar of Glasnevin in September 1844, and made him his examining chaplain.

His one convert from Judaism in Dublin appears to have been Henry Marsh Friedeberg in 1845. But Friedeberg later said he had been converted in an ‘hour of dependency’ and returned to Judaism.

Moses’ wife, Chaja (‘Haya’), gave birth to a daughter Fanny in Dublin on 24 March 1846. But by then Haya had returned to practising Judaism, and was no longer living with her husband. The child’s birth was registered with the congregation at Mary’s Abbey Synagogue, where the father was described as ‘Moses Epstein Margoliouth, a converted Jew, clergyman at Glasnevin, near Dublin.’

Glasnevin was then a small parish outside Dublin, and Margoliouth had time for literary pursuits. He started a Hebrew Christian monthly magazine, The Star of Jacob, which ran to six numbers in 1847, and tried to establish a society to promote the study of Hebrew literature and to reprint scarce Hebrew works.

He later he returned to England, served in a number of parishes, and ended his days as Vicarage of Little Linford, Buckinghamshire. He died in London in 1880.

His brother, Ezekiel Margoliouth also converted from Judaism to Anglicanism, and worked in Bethnal Green as a missionary to the Jews. Ezekiel’s son, the Revd David Samuel Margoliouth (1858-1940), was an Anglican priest and Laudian Professor of Arabic at the University of Oxford (1889-1937). Many of his works on the history of Islam became the standard treatises in English.

The Revd Adolph Paul Weinberger (1859-1937) was born on 29 June 1859 in Dejevikow, near Prague. At the time, there was a thriving Jewish population in Praguey, which was one of the principal cities in the Austro-Hungarian empire, alongside Vienna and Budapest.

Weinberger is said to have been born into a pious Orthodox Jewish family, and may even have studied to be a rabbi. He moved to England, and – like Bishop Alexander – probably converted to Christianity through his contacts with the London Jews’ Society, later CMJ.

CMJ, which remains a recognised mission agency in the Church of England, began to work began among poor Jewish immigrants in the East End of London and Weinberger was involved in similar work in Hamburg and Liverpool before moving to Dublin to prepare for ordination in the Church of Ireland.

From London, he moved to Constantinople in 1900, and he remained in the Ottoman capital until 1914.

Weinberger married Alice Paterson, daughter of Colonel Daniel Paterson Barry, a medical doctor who was a surgeon-major in the army and who had taken part in the Punjab Campaign (1848-1849), the Crimean War and the Indian Mutiny.

The Weinbergers returned to live in Dublin, where she died on 30 June 1930, and he died on 1 April 1937 at 17 Oakley Road, Ranelagh; they are buried in Mount Jerome cemetery in Harold’s Cross.

Inside the Spanish synagogue in Prague … Adolph Paul Weinberger was born in Dejevikow, near Prague (Photograph: Patrick Comerford, 2019)

There is a book of Margoulioth's sermons on Isaiah 53, preached one Lent in St Mobhi's, apparently with many Jews in the congregation.