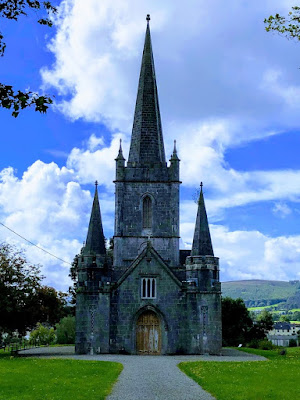 Saint Paul’s Church, Cahir, Co Tipperary, is one of a handful of churches in Ireland designed by the Regency architect John Nash (Photograph: Patrick Comerford, 2020)

Cahir was such a beautiful place to visit last week on part 2 of this year’s ‘Road Trip’ that two of us decided to return there yesterday to walk along the banks of the River Suir and to visit some other important landmarks in the Co Tipperary town, including Saint Paul’s Church, the Swiss Cottage and the Erasmus Smith schoolhouse, all designed by John Nash.

Saint Paul’s Church, in the heart of Cahir, is one of the few churches in Ireland known to have been designed by the celebrated English architect, John Nash (1752-1835). It is acknowledged that, architecturally speaking, Saint Paul’s Church is the next most important building in the town, after Cahir Castle.

The church is just a few paces north of the Square in Cahir, in a picturesque location above the River Suir with Cahir Castle as its backdrop, and its dramatic spire has become a major landmark in the town.

Nash was, perhaps, the foremost architect in Regency and Georgian Britain, and he designed many important buildings in the neoclassical and picturesque styles in London. His work was often financed by the Prince Regent (later George IV) and the property developer James Burton.

Nash’s best-known works include the Royal Pavilion, Brighton, which inspired the gate lodge in Dromana near Cappoquin, and Marble Arch and Buckingham Palace in London, as well as Regent Street, Regent’s Park and its terraces, and Carlton House Terrace. 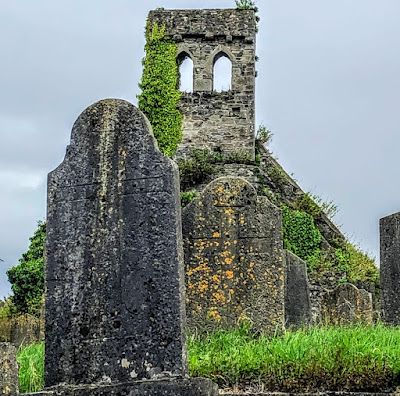 The mediaeval ‘Old’ Saint Mary’s Church served as the parish church of Cahir until the 1820s (Photograph: Patrick Comerford, 2020)

The list of vicars and rectors of Cahir dates back to the mid-16th century, and includes the travel writer and bishop Richard Pococke (1705-1765), who was Vicar of Cahir in 1730.

Until the 1820s, the parish church was the mediaeval ‘Old’ Saint Mary’s, north-east fringe of the square in the town. That church had a nave and chancel joined by a partly built-up arch. The masonry is of local limestone, and a small bell-cote springs from the apex of the gable.

The church is unusual in that is divided by a conspicuous ‘curtain wall’ that was used after the Reformation to allow both Anglicans and Roman Catholics to worship simultaneously under one roof.

To the right of the entrance door is an example of an iconographic headstone depicting scenes from the Passion. This headstone remembers the Jackson family, a prominent family in Cahir in the 18th and 19th centuries.

Bishop Joseph Stock noted during his visitation to the parish in 1811 that some ‘principal parishioners’ had a ‘restless desire’ to replace the church, but he believed the church could be repaired easily and that these parishioners could be resisted easily.

Those restless parishioners included Lord and Lady Cahir, who lived at Cahir Castle. However, a year later, in 1812, the Butlers of Cahir Castle provided a site above the banks of the River Suir for a new church. 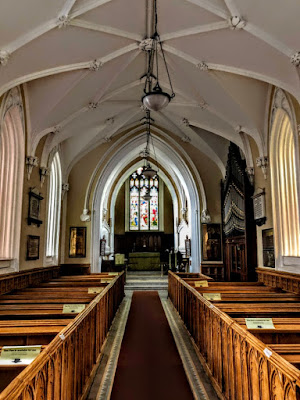 Lord Cahir was given the additional peerage titles of Viscount Cahir and Earl of Glengall in 1816. He then commissioned a new Church of Ireland parish church for Cahir, Saint Paul’s Church, and the Butler family vault would become an integral part of the church and churchyard.

John Nash built Saint Paul’s Church in 1816-1818 at a cost of £2,307 – at the time, far larger churches were built for less than half the sum. At the same time, he was working on the Swiss Cottage and the Erasmus Smith schoolhouse on commissions for the Butler family

The Revd John Wallace was the Vicar of Cahir and Grange (1803-1822) at the time Saint Paul’s Church was being built. But the consecration of the new church was delayed by the bishop’s objections, and it was no consecrated by Bishop Richard Bourke until 4 February 1810. 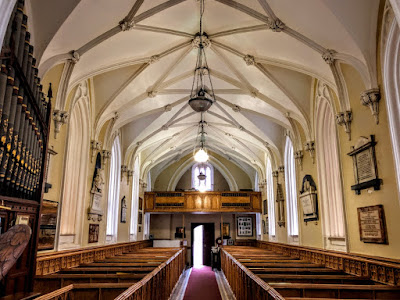 Saint Paul’s Church is a Gothic Revival work and its dramatic spire is a major landmark in the town of Cahir. The decorative smaller spires and pinnacles emphasise the fine tower and spire by drawing the eye up at all points.

This is a cruciform-plan church with a five-bay nave, gable-fronts to all windows, and the external features include high-quality ashlar limestone walls, parapets and crenellations, as well as the hood mouldings and the variety of windows.

The church is oriented on a west-east axis rather than the traditional east-west liturgical axis, to allow easier access from Church Street instead of building steps up to the site from the Mall and the banks of the River Suir.

It is said that one past rector was so uncomfortable with this liturgical arrangement that he insisted on administering Holy Communion from the liturgical west end so that he was standing at the geographical east end of the church. 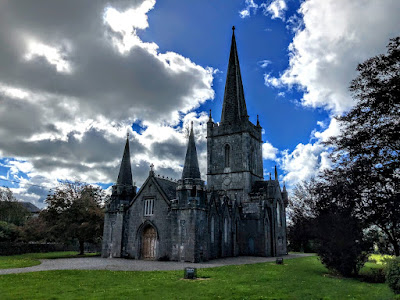 Saint Paul’s Church was commissioned by the Earl of Glengall, who lived at Cahir Castle (Photograph: Patrick Comerford, 2020)

Saint Paul’s is one of the few Regency churches to retain most of its original interior layout. The surviving interior features include the exquisite plasterwork ceilings, the decoratively-carved pine pews, the timber galleries, the carved timber lecterns, eagle lectern, benches, pulpit and organ.

The timber panelled box pews have trefoil-headed side panels and individual doors. The three carved timber galleries have trefoil and quatrefoil details and Tudor arches below between clustered columns.

The carved heads to the stops of some hood mouldings are an unusual feature.

The organ is an 1896 two-manual instrument (Opus 896) by Peter Conacher and Sons of Huddersfield. It has ten speaking stops and a particularly sweet tonal quality. 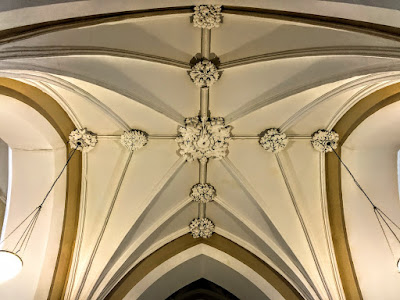 The decorative plasterwork at the crossing in Saint Paul’s Church (Photograph: Patrick Comerford, 2020)

A plan to enlarge the church in 1835 was abandoned; it would have robbed the building of much of its character and proprortions.

When the original triple-decker pulpit was removed from the crossing, the vestry became the chancel or sanctuary area, and an East window was installed in memory of the Denny family.

A stained-glass window by Sir Ninian Comper depicting a knight in full armour was installed in 1930. Comper designed many windows in Westminster Abbey, but this is one of his few works in Ireland. The window is in memory of William Smith of Duneske, who died in 1926 in his 93rd year. Above the figure are the words Scior enim quod redemptor meus vivat (‘I know that my redeemer liverth’)

The church has a vast array of memorials including some from the Butler, Archer-Butler, Charteris, Denny, Franklin, Going, Grubb, Hutchinson, Jellicoe, McCraith, Pepper, Pnnefeather and Smith families.

The stained-glass window by Sir Ninian Comper depicting a knight in full armour was installed in 1930 (Photograph: Patrick Comerford, 2020)

The only tomb in the churchyard is the mausoleum of the Glengall Butlers, who commissioned the church. The Glengall mausoleum and vault is made from a mix of marble and Aberdeen granite and was erected by Margaret Lauretta, Countess of Glengall, when her husband Richard Butler, 2nd Earl of Glengall, died in 1858. Her mother-in-law, Emily (Jefferyes) Butler, Dowager Countess of Glengall, had died in London some years earlier in 1836 and was brought back to be buried in Cahir.

Only four people are buried there, all in decorated coffins, including those of Margaret Lauretta and her youngest daughter, Lady Matilda Butler, who died at the age of 24.

Richard Butler Charteris, grandson of the 2nd Earl Glengall, continued to live at Cahir Castle until he died in 1961, ending a 600-year association between Cahir and the Butlers. He was buried in Kilcommon, outside Cahir. 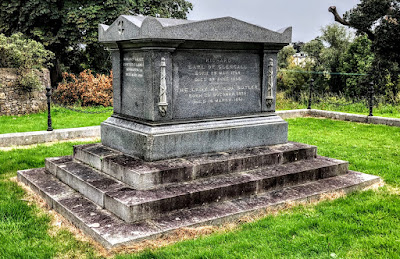 The family mausoleum of the Earls of Glengall in Saint Paul’s Churchyard (Photograph: Patrick Comerford, 2000)

Some sources claim Saint Paul’s Church in Cahir is one of only two known churches designed by John Nash. However, other Nash churches in Ireland may include: Saint John’s Church, Kilmore, near Knightstown, Valentia Island (1815), although other sources say this was designed by his pupil James Pain; Saint John’s Church Caledon, Co Tyrone (1808); Saint Luran’s Church, Derryloran, Cookstown, Co Tyrone (1822); and Saint Beaidh’s Church, Ardcarne, Co Roscommon; as well as the Quaker Meeting House in Tramore, Co Waterford.

Most areas of the church and grounds are disabled friendly with disabled parking at the church gates. During normal times, tea, coffee and cakes are available with the guided tours.

Windows in one of the transepts in Saint Paul’s Church (Photograph: Patrick Comerford, 2020)

Cahir is part of the Clonmel Group of Parishes in the Diocese of Lismore. This group includes Old Saint Mary’s Church, Clonmel, Holy Trinity Church, Fethard, Tullameelan Church (Knocklofty), and Saint Patrick’s, Inislonagh. The rector is Canon Barbara Fryday, who generously gave tow of us time yesterday afternoonas she showed us around the church. 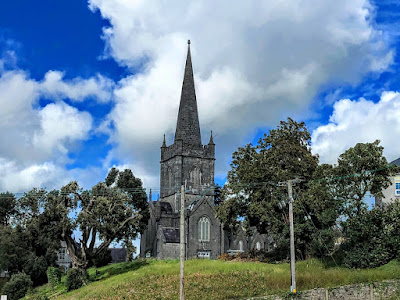 Saint Paul’s Church, Cahir, seen from the Mall and the banks of the River Suir (Photograph: Patrick Comerford, 2020)