But I was exploring Cork’s Jewish history and legacy earlier last week as part 2 of this year’s ‘Road Trip’ took me to Cork, and I am thinking again of my walking tour around Jewish Cork, following the new ‘Virtual Walk’ through Jewish Cork launched last month by the performance artist Ruti Lachs, who is active in the Munster Jewish Community.

The synagogue on Union Terrace in Cork closed in 2016, but the city’s Jewish community is remembered in Shalom Park is in the area known as ‘Jewtown,’ Cork’s equivalent of ‘Little Jerusalem’ in Dublin, between Clanbrassil Street and Portobello.

After last week’s visit to Cork, I bought Simon Lewis’s Jewtown (Doire Press, 2016), a collection of 57 brief poems that recall many of the stories of this area.

The synagogue at 10 South Terrace, built in 1896, closed in February 2016. Simon Lewis’s final poem in Jewtown, ‘The Last Sabbath at South Terrace Synagogue,’ describes one of the final services in the shul, and recalls Freddie Rosehill, the last chair of the trustees of the Cork Hebrew Congregation.

‘The Last Sabbath at South Terrace Synagogue,’ by Simon Lewis

Shipped in from Dublin, the men gathered like beetles
around the orange glow of the gas heaters, grumbling
as the Sabbath candles were lit. Above them, the women
looked down from the crumbling balcony at the ruins,
the walls twinkling with dew, the rot chewing the panels
and the blue velvet table covers airbrushed by damp.
The men shifted in the pews as their knees stiffened
and they mumbled along to the cantor’s funereal chants.
At the front of the Shul was Freddie, his silver crutch
rooted to the carpet bearing the weight of his body,
of the synagogue, of one-hundred and twenty years
of peddlers, grocers, directors. His face, red with the strain,
gave in by the first Kaddish, drooping back into the pew,
knowing he was part of the furniture, ready to be moved on.

Freddie Rosehill died within 10 months of the synagogue closing, at the age of 88.

Doire Press is based at Inverin, Co Galway, and can be found HERE. 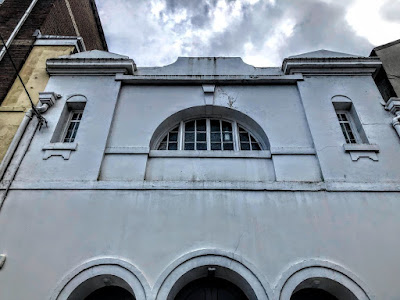