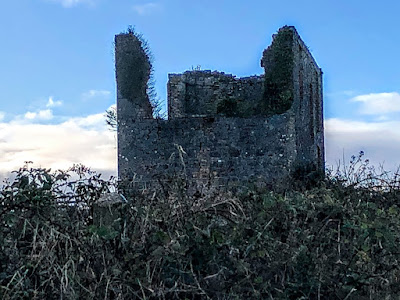 Mannix’s Folly near Shanagolden … did funds run out, or was the roof blown off time and time again? (Photograph: Patrick Comerford, 2020)

From a distance, Mannix’s Folly looks like the ruins of an old castle. It stands on a height on the west side of the Shanagolden to Rathkeale road, on the road from Kilbradren to Coolcappa, in the townland of Lisatotan.

Because there are so many castles in this part of west Limerick – from Shanid Castle and the Desmond Castle in Newcastle West to Castle Matrix near Rathkeale and Askeaton Castle – I had presumed for the past few years that this was yet another old, ruined castle.

But when I visited it yesterday afternoon (22 November 2020) as a guest of Patrick O’Regan and other members of Saint Kieran’s Heritage Association in Ardagh, I heard how, in fact, Mannix’s Folly is an uncompleted two-storey house that takes its name from the man who planned to build it about a century and a half ago.

Tom Aherne, who writes a weekly history feature in the Limerick Leader, recalled how local lore says Mannix was from Limerick City and was the chief engineer with the Great Southern Railways in 1870s when the Newcastle West to Limerick line was being laid.

Mannix (his first name is lost or fotten in the telling and retelling of the story) planned a new house that would be a noble redbrick house set on a hill, with a commanding view of the surrounding countryside. Like a watchtower, it was set on a vantage point to monitor the progress of life and the changing colours of the seasons. It would have a window on every wall of every floor, so he could look out and survey the trappings of his wealth no matter where he stood inside the house. 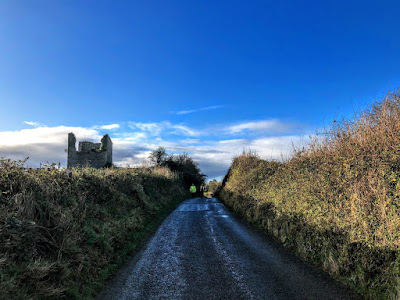 Did Mannix plan a pair of houses, one on each side of the road? (Photograph: Patrick Comerford, 2020)

Tradition says Mannix used a combination of inducements and threat to compel stonemasons, carpenters and labourers to work every day, including Sundays, to build his house. Tom Aherne recalled some traditions that Mannix also planned a similar house on the opposite side of the road and to connect the two with a bridge over the road.

One version of the story says Mannix ran out of funds before he could complete building the house in the 1870s. Another says the house was roofed on three different occasions, but each successive roof was lifted by storms and blown off, ‘scattered to the four corners of his fields.’

Mannix died before his new house could be roofed for a fourth time, and the house was abandoned in an unfinished state. As it fell into ruin, the abandoned house soon became known as ‘Mannix’s Folly.’

Local people sometimes say the unroofed house stands as a warning to anyone who might think about forcing others to work on Sundays and the folly of dishonouring the Lord’s Day. 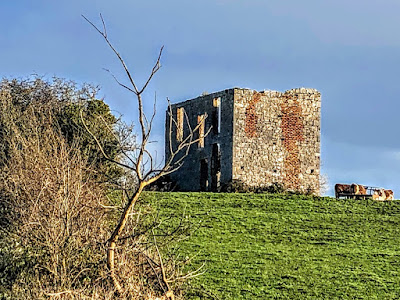 Mannix’s Folly near Shanagolden … left in ruins without ever being completed (Photograph: Patrick Comerford, 2020)