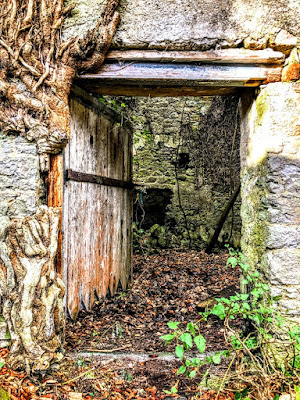 In recent weeks I have visited two well-preserved remains of formr mills within easy reach of Askeaton in west Limerick: the former Nutgrove Flour Mill, which was also known to older generations as Mullagh Mills or Donovan’s Mills; and Altavilla Mill, which was built by the Bateman family in the late 18th century.

Creeves is the name given to the five crossroads, and means branches. It is on the main road between Rathkeale and Foynes. The roads also lead to Askeaton to the north, Newcastle West to the south, Rathkeale to the east, and two roads lead to Shanagolden in the west.

The Nutgrove Mill or Donovan’s Mill is just west of Creeves Crossroads, in the townland of Mullagh, off the road between Askeaton and Shanagolden. 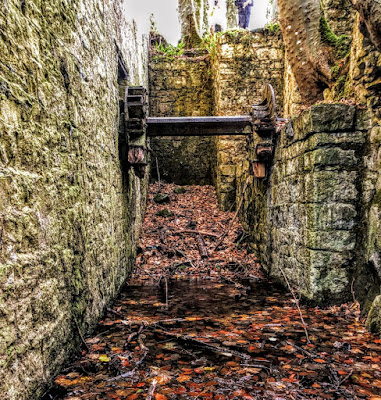 The mill was operated by an overshot wheel (Photograph: Patrick Comerford, 2020)

The Donovan family, who gave their name to the mill they owned at Nutgrove, lived nearby at Millview House.

The mill was built close by the banks of a millstream and was operated by an overshot wheel.

The stream was diverted from the Ahacroonane River (Áth a’ Chrónáin). Frome there, the river flows north, under the main Limerick-Kerry road, and into the Roberstown Creek. 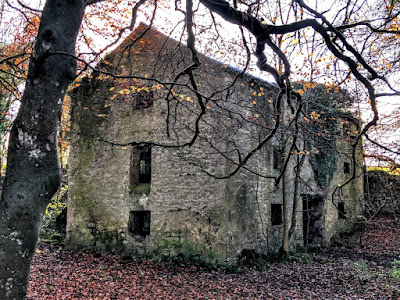 The men who worked in the mill in the early 19th century travelled long distances to work on foot, and they were paid a wage of three pence a day.

It is said a man in the Donovan family met his death in the mill due to a floor collapsing, although some local people suspected he had been killed deliberately. 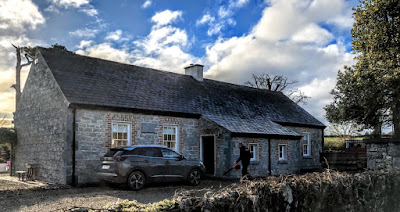 Close to the mill, the former Nutgrove National School is typical in form and size to the many national schools built at this time in Ireland. These schools were often single-storey in design, with separate entrances for girls and boys, and in Nutgrove there are two entrances in the porch.

The former school is built in simple style with regular form, a pitched roof, end chimney-stacks and tall windows. 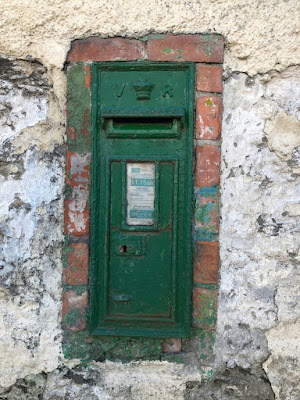 A little further east, at the crossroads in Creeves, an attractive wall-mounted cast-iron post box has a motif with a crown and Queen Victoria’s monogram ‘VR’ and crown motif.

This post box dates from ca 1880, and it is mounted in a rendered wall with a brick surround. 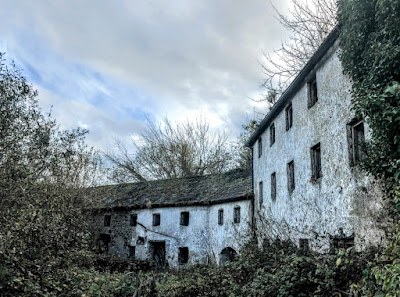 Further east, Altavilla is off the main road between Askeaton and Rathkeale. Altavilla Mill, with its striking splayed form, was built ca 1790 by John Bateman and was a working mill until a century ago, when the mill wheel ground to a halt in 1928. The building is large in scale and forms an imposing feature on the River Deel.

The mill is associated with Altavilla House, once the seat of the Bateman family and later the home of the Griffin family. 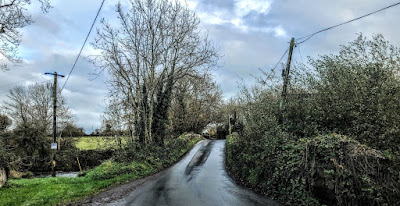 The four-arch, humpback bridge over the River Deel at Altavilla was built in 1747 (Photograph: Patrick Comerford, 2020)

The four-arch, limestone humpback bridge over the River Deel at Altavilla was built in 1747. It is interesting because of the skill displayed in its design and the high-quality craftsmanship seen in its building. It has an attractive balanced arrangement of arches that which contribute to a well-proportioned overall appearance.

The pedestrian refuge on the south side of the bridge is known locally as the ‘lovers’ seat.’ The date stone reads: ‘This bridge was built by a presentment from the county George Greene and John Bateman Esq appointed overseers finished by Mr John Murphy in the year 1747.’ 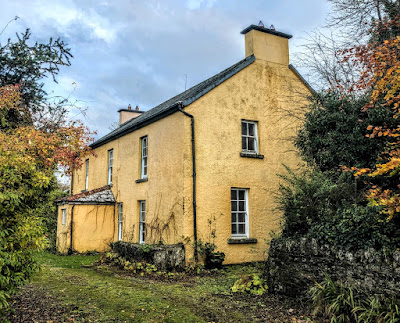 Nearby, the former creamery at Altavilla was built ca 1840 and still retains much of its original form, including the timber sash windows.

The three-bay, two-storey building is simply designed and evenly proportioned. It is strategically located on a road next to a river, bridge and former mill, with easy access for creamery carts.

The creamery was an important structure in the area, and also served as a meeting place and a social centre. 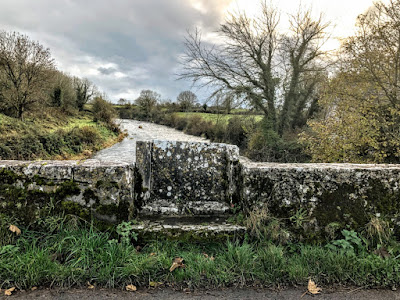 The pedestrian refuge on the south side of the bridge at Altavilla is known locally as the ‘lovers’ seat’ (Photograph: Patrick Comerford, 2020)