Mid-winter sunshine on
a winter afternoon in
Skerries and Loughshinny 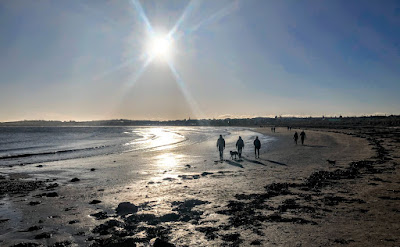 Mid-winter sunshine and blue skies on the South Beach in Skerries this afternoon (Photograph: Patrick Comerford, 2020)

I had planned to come to Dublin last week after the Christmas Day services, and to take a day off on Sunday last, with hopes to see my GP later this week for a check-up on my sarcoidosis and a booster shot for my Vitamin B12 deficiency.

But, as so often happens in ministry, life and circumstances need flexibility. There was a funeral in Tarbert on Sunday, and eventually I got to Dublin last night (Monday).

I am not so sure how long I can stay here during this lockdown after seeing my GP. But today was a sharp, cold day, with clear blue skies, and two of us decided to head north for a walk on the beaches and by the harbour in Skerries, and around Red Island.

I was last in Skerries in March, before the first major lockdown began, and it was good to back there after a nine-month absence. 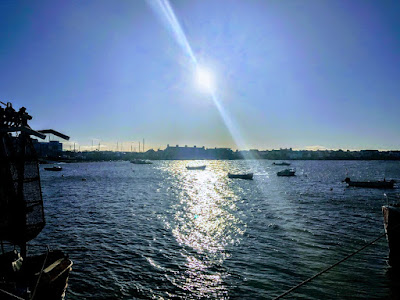 Mid-winter sunshine at the Harbour in Skerries this afternoon (Photograph: Patrick Comerford, 2020)

It is undeniable that families begin to feel cabin fever after a few days at home during the Christmas season, and there were as many people walking the beach and around the harbour in Skerries in the mid-day winter sunshine as one might expect on a day in late summer before children return to school.

Brexit deal or no-deal, the harbour was filled with a large number of trawlers and fishing boats. Every coffee shops and food outlet that was open had large queues of patient people waiting outside.

After a walk on the South Beach and stopping in Gerry’s to buy The Irish Times, we collected coffees and falafel-and-humus wraps from Olive on South Strand. 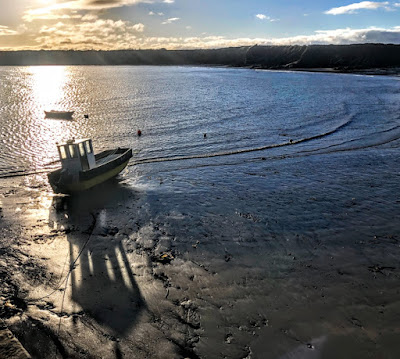 Mid-winter sunshine reflections in the arbour and blue skies on the beach in Loughshinny this afternoon (Photograph: Patrick Comerford, 2020)

Later, we decided to stop off too at Loughshinny, with its long beach and small harbour.

I was last there four years ago, in December 2016, and was surprised at how many families were there too this afternoon.

Loughshinny has poor parking facilities – although these seem to be undergoing improvements – and no coffee shops to hold visitors, and the beach feels almost like a private beach. But the beach and harbour, which once were hidden delights, have become more familiar to many families, it seemed this afternoon.

There were clear views across to Lambay Island, off the coast of Portrane, and with its narrow streets, its white-washed and thatched cottages, and harbour filled with oyster pots and fishing nets, this could be small fishing village in south Wexford or on the coast of Cornwall.

Coming back past the airport, we caught a rare but clear sight of a plane coming in to land, and thought about the many flights we have missed this year and our many cancelled travel plans. But it was good to revisit Skerries and Loughshinny this afternoon. 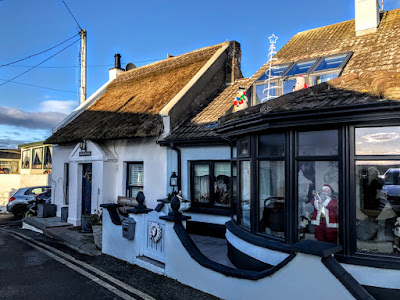 Loughshinny has the charm of a small fishing village in south Wexford or on the Cornish coast (Photograph: Patrick Comerford, 2020)