When we want to
pose for our own
‘selfies’ with Jesus 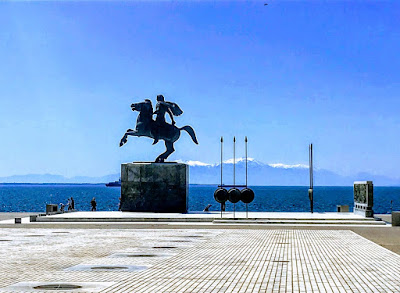 ‘Some Greeks came to Philip … and said to him, ‘Sir, we wish to see Jesus’ (John 12: 20-21) … the Monument of Alexander the Great in Thessaloniki, looking out towards Mount Olympus (Photograph: Patrick Comerford) 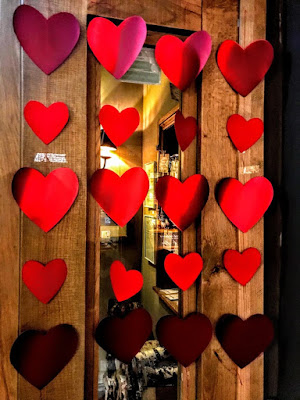 ‘But this is the covenant that I will make … and I will write it on their hearts’ (Jeremiah 31: 33) … hearts decorating a bar in Lichfield (Photograph: Patrick Comerford)

One Easter morning, when all the great Greek excitement of Easter was over – the processions, the parades, the late-night services, the bands and the street crowds – we enjoyed the calm and peace of the morning, and we walked the length of the seafront in Thessaloniki.

After all the solemnity and excitement is over, after the Lenten fasts have come to an end, no-one in Greece stirs outside their family home on Easter morning. It almost felt like we had the seafront to ourselves as we walked from the harbour to the landmark White Tower and on to the monumental sculpture of Alexander the Great.

The White Tower is a mixture of Byzantine, Venetian and Ottoman work. It was a prison and a place of massacre, and it was once known as the Red Tower, because of the blood splattered on the walls of the countless victims of torture and execution. After Thessaloniki was incorporated into the modern Greek state, the tower was whitewashed in a symbolic gesture of cleansing.

In this morning’s Gospel reading, some Greeks are in Jerusalem for the Festival – the Festival of Passover, which begins next Saturday night (27 March) for this year, and which for Christians becomes Easter. These Greeks, we are told, wish to see Jesus; so, it is only natural that they should go to Philip and ask him to help them get through the crowds to see Jesus.

Every Greek would have expected that someone with the name Philip would speak Greek. Finding Philip in the crowd must have been like finding your local TD outside the Dáil and asking him to bring you into Leinster House to meet the Taoiseach.

Philip thinks about what to do. But instead of going to Jesus, he goes to Andrew, who is yet another disciple with a Greek name. Perhaps those Greek visitors, those Greek pilgrims or tourists, think they are in with the in-crowd. They have found not one, but two Greek-speakers among the disciples.

But the story is bewildering. We are not told whether they ever get to see Jesus.

Are they simply looking for the first century equivalent of a ‘selfie’ – wanting not so much to see Jesus but to be seen with Jesus, without listening to Jesus, still less without the commitment involved in following Jesus?

In this Gospel reading, we are in the days before Palm Sunday, and the days before Passover. The Sabbath immediately preceding Passover is known as Shabbat haGadol (שבת הגדול), the ‘Great Sabbath.’ This year, this Sabbath falls next Saturday (27 March 2021.) The haftarah or prophetic portion read on that Sabbath (Malachi 3: 4-24) speaks of the ‘great day’ of God on which the Messiah will appear.

Malachi is an anonymous prophet – the name Malachi simply means ‘my messenger.’ But in this passage, he also says:

You have said, ‘It is vain to serve God. What do we profit by keeping his command or by going about as mourners before the Lord of hosts? Now we count the arrogant happy; evildoers not only prosper, but when they put God to the test they escape’ (Malachi 3: 14-15).

Whether that portion had already become established as a reading by the time Saint John’s Gospel was written, the Sabbath before the Passover was already one that was imbued with expectations of the appearance of the Messiah, and the readers of this Gospel, at this stage, would expect to hear Jesus speaking about those who have turned away from serving God.

So Christ reminds those who are listening to him in this Gospel reading that those who love him must serve, and ‘whoever serves me must follow me’ (John 12: 26).

But then, on the other hand, are Philip and Andrew like power brokers? Do they take advantage of their positions to control access to Christ, instead of inviting others to follow Christ?

The mission of Israel was to be a light to the gentiles. But in questioning, doubting – perhaps even denying – that those Greeks should have access to Christ too, are Philip and Andrew denying the mission and purpose of their own people, the reason they are freed at Passover from slavery in Egypt?

Are they, perhaps, denying the mission and witness of Christ, the inclusivity of Christ?

Do they behave as if Christ is only for them, their culture, their people, and not for all, irrespective of cultural or ethnic origins, language, background or gender?

In the second part of this Gospel story, we are pointed not just to the Cross, but to the resurrection. This is not just a story for Lent, but a story filled with the Easter promise of the Resurrection.

In the long run, the conclusion to this story is found in the experience of Greeks visiting Jerusalem after the Resurrection, just 50 days later, at Pentecost, when the Holy Spirit is poured out on devout people of every nation, and the disciples find they are heard by each one present in their own language.

It becomes a foundational experience for the Church.

Am I like Philip and Andrew, too comfortable with a Christ who fits my own cultural comforts, my own demands and expectations?

Do I all to easily lock Christ away in my own ‘churchiness,’ to the point that the stone might never have been rolled away from the tomb on Easter morning?

What prejudices from the past do I use to dress up my image of Christ today?

If Saint Paul is right …. then Christ reaches out too to those who are marginalised in our society because of their gender, sexuality, colour, language or religious background.

In Christ there is no Catholic nor Protestant, no male and female, no black and white, no gay and straight.

And every time I reduce Christ to my own comfortable categories I keep him behind that stone rolled across the tomb. 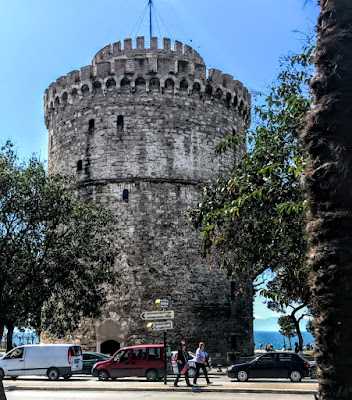 ‘Wash me and I shall be whiter than snow’ (Psalm 51: 10) … the White Tower has become an emblem of Thessaloniki (Photograph: Patrick Comerford)

27 ‘Now my soul is troubled. And what should I say — “Father, save me from this hour”? No, it is for this reason that I have come to this hour. 28 Father, glorify your name.’ Then a voice came from heaven, ‘I have glorified it, and I will glorify it again.’ 29 The crowd standing there heard it and said that it was thunder. Others said, ‘An angel has spoken to him.’ 30 Jesus answered, ‘This voice has come for your sake, not for mine. 31 Now is the judgement of this world; now the ruler of this world will be driven out. 32 And I, when I am lifted up from the earth, will draw all people to myself.’ 33 He said this to indicate the kind of death he was to die. 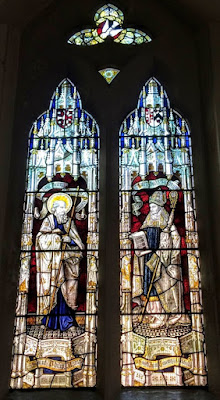 The canticle Gloria is omitted in Lent.

The Collect of the Day (Lent V):

‘Wash me and I shall be whiter than snow’ (Psalm 51: 8) … snow in Cloister Court, Sidney Sussex College, Cambridge (Photograph: Patrick Comerford) 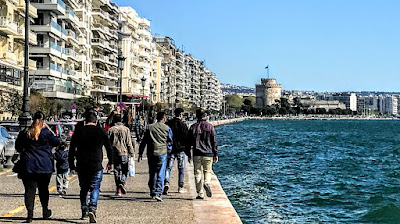 Strolling on the seafront in Thessaloniki, leading to the White Tower (Photograph: Patrick Comerford)