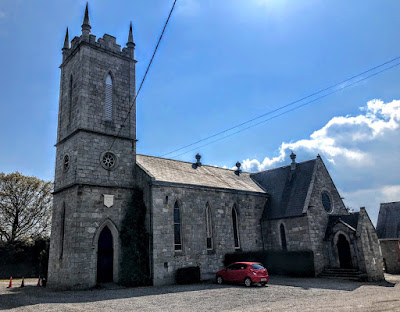 Saint Matthias’ Church was built in Killiney in 1834 as the suburbs of south Dublin expended (Photograph: Patrick Comerford, 2021)

Saint Matthias’ Church on Church Road in Killiney Ballybrack dates from 1835, and was built at a time when the southern suburbs of the city were spreading beyond the capacity of the Church of Ireland to cope with traditional parish boundaries.

The opening of the Dublin and Kingstown railway a year earlier in 1834 gave greater access from Dublin to the burgeoning suburbs of south Dublin.

As each church opened, parish boundaries were adjusted, and at first, Saint Matthias’ Church catered for all of Killiney and Dalkey and as far as Kingstown (Dun Laoghaire).

Killiney Parish belonged to the Priory of Holy Trinity (Christ Church Cathedral) from the Middle Ages, and at the Reformation it was granted to the Dean of Christ Church. Later, it was served by the curates of Dalkey, and from the 17th century Killiney was united with Monkstown.

An Act of Parliament in 1824 called for building a new chapel of ease in Killiney. The site was donated by Sir Compton Domville (1775-1857) of Templeogue House and Santry House and Governor of Dublin (1822-1831). Domville, who was a son-in-law of Bishop Charles Lindsay of Kildare, also gave a portion of glebe. The first chaplain, the Revd Charles Sleator (1800-1868), was appointed in 1828, and remained in Killiney for 40 years until he died at Killiney on 23 October 1868. 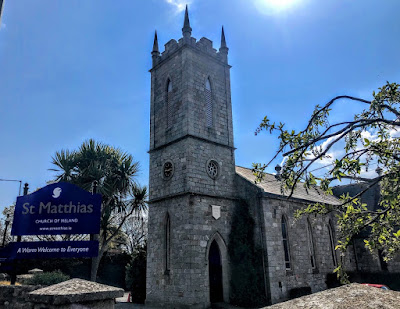 The church was designed by the Dublin architect Frederick Darley Junior (1798-1872), architect to the Diocese of Dublin. Darley’s plans were submitted to vestry by Christmas 1834, and the church was consecrated in April 1835.

He was a pupil of Francis Johnston, and he was the Ecclesiastical Commissioners’ architect for the Diocese of Dublin in 1833-1843. In the 1830s, he was also architect to Trinity College Dublin, and he was architect to the Royal Dublin Society and the Board of National Education. He was a Fellow of the Royal Institute of Architects of Ireland (FRIAI), a council member (1839-1851), and honorary secretary (1842-1849).

Darley also designed many model schools and model agricultural schools throughout Ireland. He was one of four architects appointed in 1860 to inspect and report on the restoration of Saint Patrick’s Cathedral, Dublin, and later became an Ecclesiastical Commissioner.

Darley married Penelope Andrews (1790-1886), daughter of Alderman Thomas Andrews of Dublin. He was living at 14 Clarinda Park North, Kingstown, when he died in 1872. 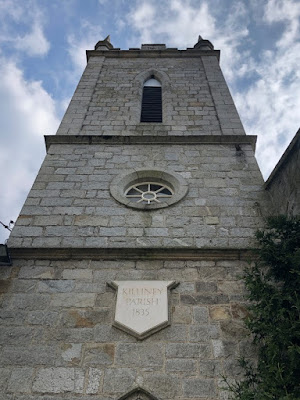 Saint Matthias’ Church was described at the time by Samuel Lewis as looking like ‘a chapel of ease … in the later English style, and it is built of the white granite that is found in great abundance on the spot; at the west end is an embattled tower with pinnacles.’

The church has a cruciform plan form, aligned along an inverted liturgically-correct axis. The slender profile of the openings emphasise the mediaeval Gothic style, with the chancel defined by a cusped ‘Trinity Window,’ and the polygonal pinnacles embellishing the tower as an eye-catching picturesque feature in the landscape.

There are stained glass windows by Heaton, Butler and Bayne of London and Catherine O’Brien (1881-1963) of Dublin, and the Stark Symes Memorial ‘Trinity Window’ is signed by Franz Mayer and Company of Munich and London (1880). Other interior details include the ‘Last Supper’ depicted on the reredos, and the encaustic tiles. 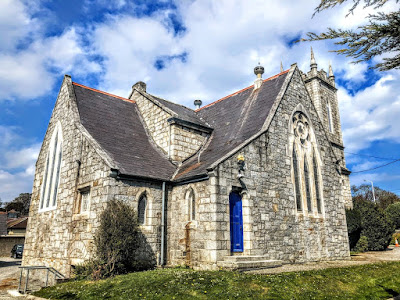 While Maurice Day was the rector, Darley’s style was continued in 1879-1880 when the church was developed or ‘improved’ to designs by William John Welland (1832-1896). These included the addition of the chancel and a transept. Welland was ‘presented with a gold watch for having given his services gratuitously as architect’ in 1880.

The Revd Dr William Olhausen has been the Rector of Killiney Ballybrack since 2011, and the honorary curate is the Revd Dr Paddy McGlinchey, a lecturer in the Church of Ireland Theological Institute.

Despite the busy dual-carriageway that brings speeding traffic past the church from the M50 to Killiney, Monkstown and Dalkey, the church is part on a pleasing ecclesiastical ensemble and visual statement on Church Road. 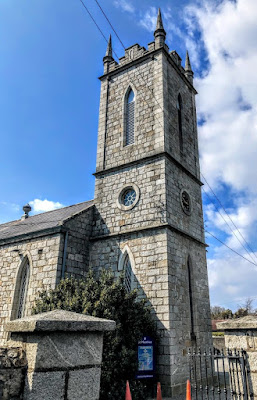