A sculpture in Cahersiveen
recalls the ‘Skellig Monks’ 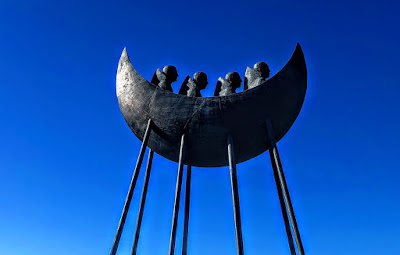 The ‘Skellig Monks’ … a landmark sculpture by Éamonn O’Doherty in Cahersiveen on the Ring of Kerry (Photograph: Patrick Comerford, 2021)

The ‘Skellig Monks’ is a landmark sculpture on the eastern fringe of Cahersiveen, Co Kerry, looking out onto Dingle Bay. The monks have been there since 1995, and have become a well-known sight on the Ring of Kerry.

The ‘Skellig Monks’ are four monks in a crescent moon-shaped or sickle-shaped boat, originally with a mast in the shape of a cross. The sculpture stands in the air, between the mountains and the sea, supported on eight oars.

The sculpture, also known as ‘Saint Brendan’s Voyage,’ represents Saint Brendan and his fellow monks on their voyage to the monastery at Skellig Michael, where they founded an early monastery on the rocks off the Kerry coast.

Saint Brendan of Ardfert or Saint Brendan of Clonfert is also known as Saint Brendan the Navigator, and is said to have lived ca 484 to ca 577). He is known for his legendary quest for the ‘Isle of the Blessed’ and his encounter with a whale on his sea voyage.

The sculpture was completed in 1995 by the Irish sculptor, painter, printmaker, architect, photographer and lecturer Éamonn O’Doherty (1938 -2011), who is known for his sculptures in public places.

His well-known public sculptures include the Anna Livia monument, or the ‘Floozie in the Jacuzzi,’ moved in 2011 from O’Connell Street to the Croppies’ Acre Memorial Park in Dublin; the Quincentennial sculpture in Eyre Square, Galway; the Wind sculpture, Dublin; the James Connolly Memorial near Liberty Hall, Dublin; Crann an Oir at the Central Bank of Ireland, Dublin; and ‘Fuascailt,’ a sculpture of 1798 United Irish pikemen on the N25 outside Wexford near Barntown and Taghmon.

Éamonn O’Doherty was born and raised in Derry and studied architecture at University College Dublin (UCD). He was the first manager of Sweeney’s Men, and painted the band’s logo on the front of their van in 1966. That year he also toured Denmark with Andy Irvine.

Later he became a lecturer at the Department of Architecture at the Dublin Institute of Technology, and also taught at the Dún Laoghaire College of Art and Design, the École Spéciale d’Architecture, Paris, Harvard, the University of Nebraska and the University of Jordan. He received many awards for his paintings, and an exhibition of his photographs in the Irish Traditional Music Archive toured the US.

Éamonn O’Doherty married Barbara Ó Brolchain, and they were the parents of three daughters and a son. He died in Dublin on 4 August 2011 at the age of 72.

Since the sculpture was erected in 1995, the boat has lost its mast in the shape of a cross. I wonder too whether I am alone in noticing that the monks appear to be sailing into Dingle Bay rather than sailing out to the Skelligs Rocks and the Atlantic. 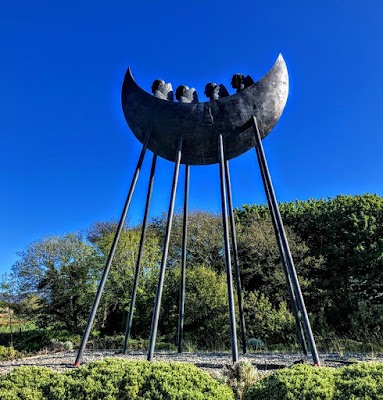 The ‘Skellig Monks’ between the mountains and the sea … but what has happed to their cross-shaped mast? (Photograph: Patrick Comerford, 2021)