The figure of Sinagoga, blindfolded by a snake, at Lichfield Cathedral … a motif surviving from mediaeval art depicting a hidden anti-Semitism (Photograph: Patrick Comerford, 2021)

The Church of England plans to offer an ‘act of repentance’ next year over antisemitic church laws passed 800 years ago. The Church of England has been grappling with its role in the past in fuelling anti-Jewish racism and as part of this process published the report God’s Unfailing Word two years ago, in November 2019.

The Church of England and the Council of Christians and Jews are planning a service next year to mark the passing of 800 years since the Synod of Oxford in 1222. At that synod, church leaders passed a number of antisemitic edicts, including one requiring Jewish people in mediaeval England wear a badge and excluding them from certain jobs.

The Bishop of Lichfield, the Right Rev Michael Ipgrave, has described the decree at the Synod of Oxford in 1222 as ‘the Magna Carta of English canon law, which implemented some of the most egregious anti-Semitic decrees.’

Jews were later expelled from England in 1290, and were not legally readmitted until 1656.

Last week, I paid attention to a figure on the west front of Lichfield Cathedral that appears on cathedrals throughout Europe too and that is often interpreted as a mediaeval anti-Semitic image. My attention was first drawn to these figures last year in a collection of photographs shared by my Facebook friend Clive Read.

Two statues, known as Ecclesia and Sinagoga, are often seen as pair on mediaeval cathedrals. Ecclesia is often dressed in fine clothing and appears to be bathed in light, while Sinagoga is dishevelled, with a large snake draped over her eyes like a blindfold.

Images mocking Jews and Judaism and encouraging anti-Semitic violence have been common throughout Europe since the early Middle Ages. In a time when many were illiterate, these images were the political cartoons and posters of the age, and the ridicule and carnage they promoted was both routine and sanctioned by the secular and religious authorities of the day.

The covering over Sinagoga’s eyes is derived Saint Paul’s words in II Corinthians, which says that Jews ‘to this very day’ have ‘a veil … over their minds; but when one turns to the Lord, the veil is removed’ (II Corinthians 3: 15-16, NRSVA).

The paired figures are generally found on the cathedrals of larger cities in northern Europe that had significant Jewish communities, especially in Germany. They were intended to remind Jews of their place in a Christian society. There are remains of pairs in England at Rochester, Lincoln, Salisbury and Winchester. There may have been pairs in London and York too, but until last year I had not realised there is a similar image at Lichfield Cathedral.

In most cases, they date to the arrival of larger Jewish communities in Western Europe from the late 10th to the 12th centuries, and to the 12th-century Renaissance debates between Christian and Jewish scholars on interpretations of the Hebrew Bible. But what is surprising about the Lichfield Sinagoga is that until now mediaeval Lichfield seems to have had no considerable Jewish presence. 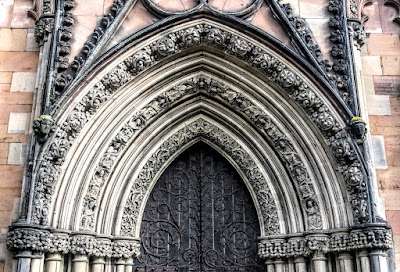 Ecclesia (left) and blindfolded Sinagoga (right) among the carvings above the south door on the West Front of Lichfield Cathedral (Photograph: Patrick Comerford, 2021)

Bishop Michael Ipgrave has described next year’s anniversary as an ‘opportunity for a local expression of repentance.’

Jewish groups have welcomed the proposed apology. Dave Rich, director of policy at the Community Security Trust, an anti-Semitism watchdog group, said the Church of England’s message of solidarity came amid rising antisemitism.

He said: ‘The phrase “better late than never” is truly appropriate here. The historic trauma of mediaeval English antisemitism can never be erased and its legacy survives today – for example, through the persistence of the “blood libel” allegation that was invented’ in England.

‘It is important that the Church has finally recognised their historic role in this; but perhaps more important is the message of solidarity and support for the Jewish community at a time of rising antisemitism today.’

Speaking in the General Synod in July, Jacob Vince noted that the antisemitic edicts in 1222 had ‘heightened antisemitic feeling and led to the first nationwide expulsion of all Jews from England in 1290.’ He asked: ‘In light of rapidly worsening antisemitism in the UK in recent months, might the 800th anniversary next year be an opportune moment for the Church of England to consider making a formal break with these historic prejudices as a gesture of solidarity with our Jewish neighbours, England’s oldest ethnic minority.’

The report God’s Unfailing Word in 2019 included an historic expression of repentance for the Church’s participation and collusion in over 1,000 years of anti-Jewish thinking and practice in England, according to Bishop Ipgrave of Lichfield, who also chairs the Council of Christians and Jews.

The report was the first authoritative publication on Jewish-Christian relations produced by the Faith and Order Commission of the Church of England. The National Inter-Religious Affairs Adviser, the Revd Dr Richard Sudworth, said that it was aimed at bringing ‘up to date some of the theology,’ as well as acknowledging the Church’s own complicity in anti-Jewish sentiment.

The document argues from the premise that the Christian-Jewish relationship is a ‘gift of God to the Church,’ and that it has ‘unique significance.’ It accepts that anti-Judaism in the Church over the centuries fostered ‘the passive acquiescence if not positive support of many Christians in actions that led to the Holocaust.’

It continues: ‘Recognition on the part of the Church that it bears a considerable measure of responsibility for the spread of antisemitism demands a response from the Church … There is a continuing theological task for the Church in its response to the reality of antisemitism and in seeking to build good relationships with Jewish people today.’

Bishop Ipgrave, who chaired the working group that produced the document, said: ‘It does represent the range of views and the consensus on the issue. It is a positive statement, which particularly urges building positive relations with the Jewish people.’ He added: ‘We started this project … aware that anti-Semitism is very much a problem in our society, and churches should be part of the process working against it.’

Lancelot Addison (1632-1703), who became Dean of Lichfield from 1683, was an early scholar of Jewish studied in the Church of England. He had been a chaplain in Tangier, and in 1675 he published his study, Present State of the Jews – more particularly relating to those in Barbary. He studied Jewish customs, secular and religious, and gave an account of the Mishnah, the Talmud and the Gemara.

Nevertheless, Supersessionism and antisemitism continued among prominent figures in the Church of England. The London Society for Promoting Christianity Amongst the Jews was founded early in the 19th century and still exists today as the Church’s Ministry among Jewish People. Notable features of the society’s annual sermons are the continuation of the ‘blood libel’ myth and the way in which they present the society as the fulfilment of God’s plans.

Henry Ryder, later Bishop of Lichfield (1824-1836), continued the ‘blood libel’ myth when he preached the society’s annual sermon in 1814 as Dean of Wells. In his sermon he took as his text Luke 24: 34, ‘Father, forgive them; for they know not what they do,’ and applied this to the Jews and to the Roman soldiers, stating: ‘They were the men who forced Pilate … against his will to consent to the execution.’

He said the Jews took upon themselves ‘an exclusive share in the deed’ when they declared ‘His blood be on us, and on our children.’ He went on to say that Christ is still interceding for ‘the modern Jew,’ but he ‘cannot be reached without a distinct establishment expressly appropriated and suited to his case.’ The society was just such an organisation, he said, and he claimed that ‘under [its] auspices’ the Jews will find employment, have access to ‘useful and religious education,’ and – most importantly – ‘be converted and brought to a saving knowledge of the truth.’

The anniversary sermon was preached in 1819 by the Revd Edward Cooper, Rector of Hamstall Ridware near Lichfield, and of Yoxall in the Diocese of Lichfield, when he repeated the claims Supersessionism and said ‘the Conversion of the Jews to Christianity’ was envisioned by Saint Paul in Romans 11 and elsewhere. This was ‘the avowed, and exclusive Object pursued by the Society,’ he said.

Cooper was a cousin of Jane Austen. But, perhaps, his sermon was coloured more by Pride and Prejudice than by Sense and Sensibility. 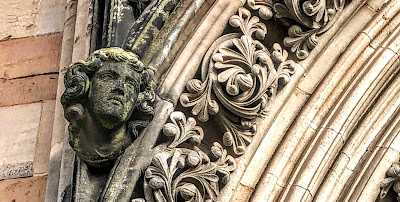 Ecclesia among the carvings above the south door on the West Front of Lichfield Cathedral (Photograph: Patrick Comerford, 2021)