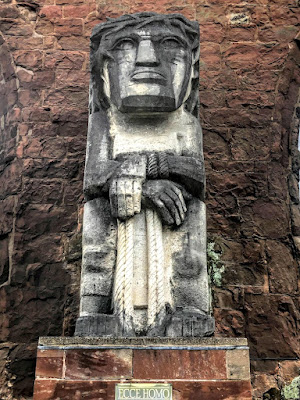 ‘Ecce Homo’ by Jacob Epstein in the ruins of the Old Coventry Cathedral (Photograph: Patrick Comerford, 2021)

However – apart from the effigy of Bishop Huyshe Wolcott Yeatman-Biggs by Sir William Hamo Thornycroft – three sculptures in particular drew my attention in the ruins of the Old Cathedral: Jacob Epstein’s statue Ecce Homo; a Statue of Christ by Alain John when he was an 18-year-old pupil at Blundell’s School; and the Choir of Survivors by Helmut Heinze, a gift from Dresden.

The statue Ecce Homo was carved by Sir Jacob Epstein from a single block of Subicao marble in 1934-1935, more than 20 years before he was commissioned to work at Coventry Cathedral.

Ecce Homo represents Christ before Pilate with his hands bound and a crown of thorns upon his head. The words Ecce homo are the words used by Pontius Pilate in the Latin Vulgate translation of John 19: 5, when he presents Christ to a hostile crowd shortly before his Crucifixion.

Sir Jacob Epstein’s uncompromisingly brutal depiction of the suffering Christ contrasts sharply with the more delicate figures in bronze he created for the façade of the new cathedral.

Coventry Cathedral is a unique synthesis of old and new, born of war-time suffering and forged in the spirit of post-war optimism, and it is the most radically modern of Anglican cathedrals. Two cathedrals stand side by side, the ruins of the mediaeval building, destroyed by incendiary bombs in 1940, and the bold new building designed by Basil Spence and opened in 1962.

Saint Michael’s parish church, which dates mainly from the 15th century, became the seat of the new Diocese of Coventry in 1918. At the time, it was one of the largest parish churches in the England and it was upgraded to cathedral status without any real structural changes. It survived as a cathedral for just 22 years until it was burned to the ground in the Coventry Blitz in 1940, leaving only the outer walls and the magnificent tapering tower and spire. The extensive arcades and clerestories collapsed completely in the fire, when the roof reinforcement girders, installed in the Victorian restoration, buckled in the intense heat.

The new cathedral, designed by Sir Basil Spence, was built in 1957-1962 beside the ruins. It was controversial because of its modern form, although some modernists argued that it did not go far enough.

Spence employed some of the greatest names in contemporary art to contribute to create his new cathedral. The exterior is adorned with Jacob Epstein’s triumphant bronze figures of Archangel Michael vanquishing the Devil. At the entrance is the remarkable glass wall, engraved by John Hutton, with saints and angels ascending to heaven and descending. Graham Sutherland designed the great tapestry behind the High Altar with Christ in Majesty surrounded by representations of the four evangelists.

Jacob Epstein (1880-1959) studied in New York and Paris and was an extremely controversial figure in his days. The result of his first major commission for the British Medical Association caused an outcry and resulted in very few public commissions for the next 30 years.

With the passage of time, Jacob Epstein is now seen as one of the foremost figures in British sculpture of the early 20th century. His major public commissions include: Christ in Majesty in Llandaff Cathedral (1954); Oscar Wilde’s tomb; the façade of the London Electric Railway headquarters; and the façade of the British Medical Association in the Strand, London, now Zimbabwe House.

He also created the sculpture in bronze in Lichfield Cathedral of Edward Sydney Woods, Bishop of Lichfield (1937-1953), completed in 1958, five years after the bishop’s death.

When Basil Spence commissioned Jacob Epstein to work in Coventry Cathedral, some members of the rebuilding committee objected. They said some of his earlier works were controversial. And, although Coventry was at the centre of post-war reconciliation, some even objected, saying Epstein was a Jew. To this, Spence retorted: ‘So was Jesus Christ.’

His earlier sculpture Ecce Homo was given to Coventry cathedral at the wish of Lady Epstein and was dedicated on 22 March 1969. 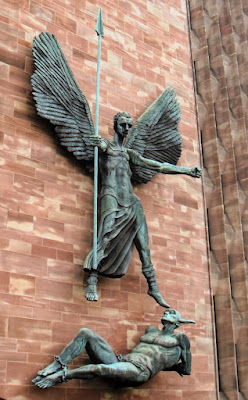 Tomorrow: The Statue of Christ by Alain John