Ballet shoes on the grave of the Russian ballet impresario Sergei Diaghilev on the cemetery island of San Michele in the Lagoon of Venice (Photograph: Patrick Comerford, 2021)

Venice is a collection of islands linked by canals and bridges, interconnected by narrow alleyways, squares of all shapes and sizes and the vaporetti or water buses. While tourists find their way from Rialto to San Marco, or from Cannaregio to Giudecca, few move beyond the main highlights found in their guidebooks.

More discerning visitors may spend a few hours in the islands of the lagoon, especially the Lido, Torcello and Murano and Burano.

But the smaller islands are generally missed, and few make it in any great numbers to the Isola di San Michele, a former prison island that takes five or ten minutes to reach by water bus, half-way between Fondamente Nuove on Cannaregio and the island of Murano on vaporetto routes 41 and 42.

Perhaps they are deterred by the name of the vaporetto stop for San Michele: Cimitero. For this has been Venice’s cemetery since the early 1800s, when the occupying Napoleonic forces told the Venetians to start taking their dead across the water instead of burying them in Venice itself.

It was all in the name of hygiene and because of a growing shortage of burial places.

The lagoon was once the preserve of fishermen and hunters, and the stories of the islands is shrouded in myth and legend. Murano is the island of glassmakers and Burano the island of lace, but other islands were monasteries, used as prisons and gunpowder factories, or serving as market gardens or cemeteries. 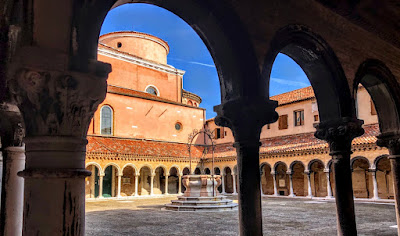 In the cloisters of the Church of San Michele (Photograph: Patrick Comerford, 2021)

Cimitero, with a large number of cypress trees and enclosed within high terracotta walls, was originally the two islets of San Michele and San Cristoforo della Pace.

The Hermits of the Camaldolese Order moved onto the island in the 12th century, and founded the Monastery of Saint Michael (San Michele di Murano), which became a centre of learning and printing. The famous cartographer, Fra Mauro, who drew maps that helped European explorers, was a monk of this community.

The landmark building on the island is the Chiesa di San Michele in Isola, designed by Mauro Codussi in 1469. This was the first Renaissance church in Venice, and the first church in Venice to be faced in white Istrian stone.

But the monastery was suppressed by French forces under Napoleon, in the course of their conquest of the Italian peninsula, and the monks were expelled in 1814. The Napoleonic administration had decreed that burial on the main islands of Venice was unsanitary, and these two small islands then became Venice’s major cemetery. The canal separating the two islands was filled in between 1837 and 1839, and the larger island became known as San Michele. 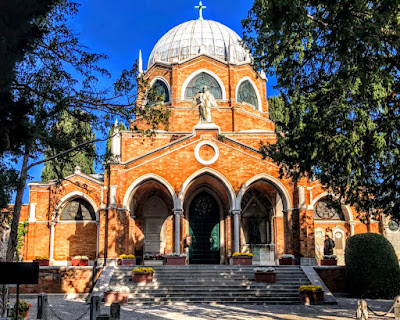 At one time, coffins were carried to the island on special funeral gondolas. Earlier last week, two of us visited the old and new Jewish cemeteries on the Lido. So, one morning, we decided to see Cimitero, an island that we had given a miss before on the journey to and from Murano.

Jan Morris, in The World of Venice, compares the cemetery island to a ship where ‘the director stands as proudly in his great graveyard as any masterful cruiser captain, god-like on his bridge.’

The cemetery is wide and calm, with a series of large gardens, studded with cypress trees and cluttered with hundreds of thousands of tombs and graves. Some are lavishly monumental, with domes and sculptures and wrought-iron gates; many more are stacked in high modern terraces, like filing cabinets. 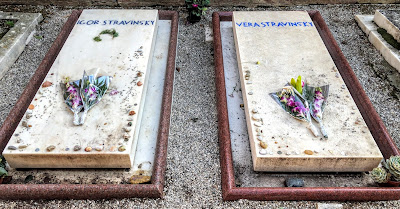 The graves of Igor and Vera Stravinsky on San Michele (Photograph: Patrick Comerford, 2021)

Most of San Michele is reserved for Catholics. Walls separate the different areas, and the graves lie in neat, tightly-packed, serried rows, separated by paths. Some graves are neglected, but most are well-tended and many had recently-laid flowers, perhaps there since All Souls’ Day earlier the previous week (2 November).

The island also has two smaller, separate graveyards for other Christians. Those who are buried in the Greci or Greek Orthodox cemetery include the composer Igor Stravisky (1882-1971) and the Russian ballet impresario Sergei Diaghilev (1872-1929).

Venice has always had a sizeable Greek population, and here too are the graves of bishops, merchants and refugees who fled Smyrna in the 1920s.

In the Evangelisti or Protestant graveyard, we found the graves of the American poet and critic, and fascist collaborator, Ezra Pound (1885-1972), who influenced the work of TS Eliot, James Joyce and Ernest Hemingway, and of Pound’s mistress, the violinist Olga Rudge (1895-1996). Here too are the graves of the Russian and American poet and essayist Joseph Brodsky (1940-1996), and the German painter August Wolf (1842-1915).

One gravestone has an awkwardly-composed inscription: ‘In loving memory of Frank Justice Stanier of Staffordshire who left us in peace, Febry 2nd 1910.’ His family lived at Madeley Manor, Staffordshire, and at Moor House, Biddulph. Another gravestone is of Edward Douglas Guinness (1893-1983), a member of the banking branch of the family and a partner in Guinness Mahon.

In contrast to the formal, tended graves and gardens of graves in other parts of the cemetery, the Greci and Protestant sections have an atmosphere of rustic decay. Some tombstones are covered in moss, a few are leaning over, and some are collapsing. 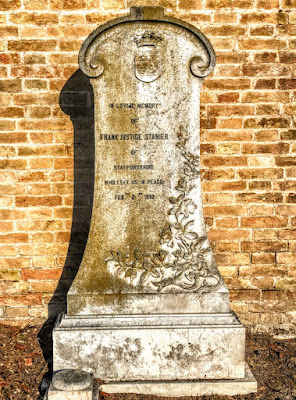 The grave of Frank Justice Stanier of Staffordshire ‘who left us in peace’ (Photograph: Patrick Comerford, 2021)

The Chiesa di San Michele in Isola was designed by Mauro Codussi and built ca 1469. This is the first Renaissance church in Venice, and the church and the monastery also served for a time as a prison.

The other churches and chapels on the islands include cemetery church of San Cristoforo, designed by Gian Antonio Selva (1751-1819), the Cappella Emiliana chapel, and a small Greek Orthodox funeral chapel.

If San Michele is not crowded by living tourists, it is certainly crowded by dead Venetians. It is so crowded that graves are on short-term leases. The bodies in each row of graves are allowed to decompose for 12 years, and are then dug up.

When families could not pay for reburial, the bones of the dead are taken to the ossuary island of Sant’Ariano, near Torcello. That island is described vividly by Michael Dibdin in his novel Dead Lagoon. Today, after a respectful passage of time, bones are transferred to small metal boxes in tall grey cement-block piles that look more like filing cabinets.

As we left the island and waited for the water bus, we agreed to go to lunch wherever the first vaporetto brought us: Murano or Cannaregio. When it arrived, the next vaporetto was going to Fondamente Nuove, and so we opted for lunch in the Ghetto. 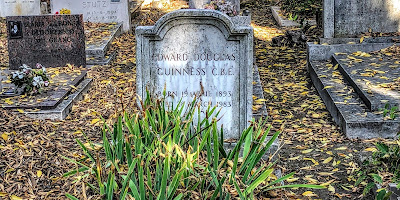