‘The dawn from high will break upon us,
to give light to those who dwell in darkness
and in the shadow of death’ 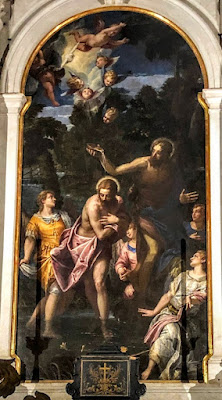 ‘The Baptism of Christ’ by Paolo Veronese in the Church of Il Redentore in Venice (Photograph: Patrick Comerford, 2021)

There is a link to the readings HERE 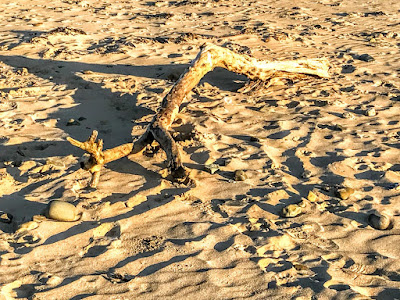 ‘God is able from these stones to raise up children to Abraham. Even now the axe is lying at the root of the trees; every tree therefore that does not bear good fruit is cut down and thrown into the fire’ … (Luke 3: 8-9) (Photograph: Patrick Comerford)

This morning, on the Third Sunday of Advent, our readings remind us of the promises proclaimed by the prophets, of Saint Paul’s promise that Christ is coming again, and of Saint John the Baptist preparing in the wilderness for the coming of Christ.

Saint Paul’s message is so joyful – ‘Rejoice in the Lord always, again I will say Rejoice! (Philippians 4: 4) – so joyful that this Sunday is often called ‘Gaudete Sunday’ – Gaudete Sunday, the Sunday for rejoicing.

However, I suppose many of us felt a lot less like rejoicing during Storm Barra last week, and more like we were in the wilderness as the electricity kept going off for hours on end.

It was difficult to know which was worse: the darkness that lasted for so long, or the shrieking sounds that woke up the neighbours because the power cuts had short-circuited the alarms in the rectory.

As I sat in the darkness, I was reminded of verses in the Canticle Benedictus which we used last Sunday (5 December 2021, Advent II):

In the tender compassion of our God
the dawn from on high shall break upon us.
To shine on those who dwell in darkness … (Benedictus, vv 9-10).

For many of us, there are different reasons why we find ourselves in darkness and in the wilderness, both spiritually and socially. Yet Advent offers us the sure hope that God is coming among us, as John the Baptist promises this morning, to gather us up into his kingdom (see Luke 3: 16-18). Or, as the Prophet Zephaniah promises: ‘He will rejoice over you with gladness, he will renew you in his love’ (Zephaniah 3: 17).

One of the saints in the Calendar of the Church of England during Advent is Samuel Johnson, the compiler of the first Dictionary, who is commemorated tomorrow (13 December).

A childhood illness left him deaf in one ear, and a botched medical procedure in his childhood left permanent scars across his face and body. As a child, he was so blind and disabled that a family servant carried him on her back to and from school each day.

But Samuel Johnson refused to allow his near-blindness and his visible disabilities to put him on the margins of society, or to blame his parents or himself for the disabilities that made him almost sightless and almost unsightly. Indeed, all this served to strengthen and to grow his faith as he matured.

One of his last acts was to receive Holy Communion before he died on the evening of 13 December 1784. His life story is one of darkness turning to light, of moving from blindness to sight, of rising above the harsh judgments of others who would have put him in a wilderness, to redemption, restoration and a living faith.

On a street corner in Lichfield, a larger-than-life mosaic by John Myatt depicts the recognisable face of Samuel Johnson, including his squinting eyes. It is made of small plywood blocks painted with emulsion and marine varnish in a variety of colours.

John Myatt is a controversial artist and a convicted forger who carried out ‘the biggest art fraud of the 20th century.’

As an art student in Stafford, he discovered an amusing talent for mimicking the styles of great artists. He began teaching art at a school near Tamworth, opened a studio in Lichfield, and painted his mural of Samuel Johnson in 1976. At the same time, he developed a passion that turned into quite a skill – painting undetectable fakes.

His first wife left him in 1985, and he gave up teaching and tried to make a living by painting original works in the style of well-known artists. While struggling to raise two children on an art teacher’s salary, he placed a notice in Private Eye offering ‘genuine 19th and 20th century fakes for £200.’

A regular customer, John Drewe, resold some of these paintings as genuine works, and forged papers for their provenance. When he told John Myatt that Christie’s had accepted one of his paintings as a genuine work for £25,000, he became a willing accomplice to Drewe’s fraud, and began painting in the style of masters like Marc Chagall, Le Corbusier, Matisse and Graham Sutherland.

Drewe sold them to auction houses, including Christie’s, Phillips and Sotheby’s, and to dealers in London, Paris and New York.

Myatt was arrested in 1995. He quickly confessed, admitting he had created the paintings using emulsion paint and K-Y Jelly. He had made around £275,000, and offered to return it all and to help to convict Drewe. Myatt was jailed for a year and Drewe was jailed for six years.

On his release, John Myatt’s arresting officer from Scotland Yard became the first new customer for his ‘Genuine Fakes.’ Since then, he continues to paint portraits and copies, now marked indelibly as fakes. Some sell for up to £45,000.

John restored the mural of Samuel Johnson in Lichfield in 2005. Now he is a well-known Sky Arts presenter, happily remarried, and making a living from these legitimate paintings. He advises the police on art fraud as well as colleges in Oxford and Cambridge, and Sotheby’s, and he is the subject of a new film Genuine Fakes.

Now back living in Lichfield, John Myatt is a committed Christian and plays the organ in his local church every Sunday. His story is not just a story with a happy ending, but a story for Advent about wilderness times, fall and restoration, and the promise of new light and new life.

Both John Myatt and Samuel Johnson found themselves in the darkness and in the wilderness, but they moved from the trials of Advent to the hope of Christmas. Their stories are stories of compassion, and of how the compassion of Christ not only extends to but also embraces all who are pushed to the margins all too easily.

The Advent promise of the Prophet Zephaniah this morning is:

I will make you renowned and praised
among all the peoples of the earth,
when I restore your fortunes
before your eyes, says the Lord (Zephaniah 3: 20)

And the Advent promise that resounds in our ears, time and time again, that we hear all this season, from the Prophet Isaiah to the Gospels, to the Advent words of peace, to Handel’s Messiah, is: 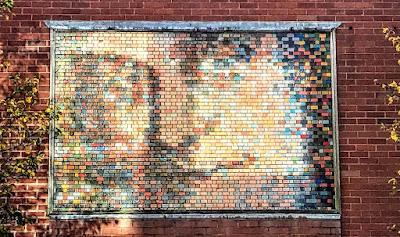 Lord Jesus, your cousin John
prepared the way for your coming.
Bless all who speak out against
injustice and wrong:
so may the light of your truth
burn brightly, and the world become
a fairer and just home for all.
(A prayer from USPG)

O Lord our God,
you are the Mighty One
who prepared the Blessed Virgin Mary
to be the mother of our Lord:
may we like Elizabeth and John the Baptist
recognise the presence among us of him
who sanctifies us through his body offered for us,
your Son, Jesus Christ,
who lives and reigns with you
in the unity of the Holy Spirit,
one God, for ever and ever.

‘We give you thanks for these heavenly gifts’ (Post-Communion Prayer) … an icon screen in the parish church in Kalamitsi Alexandrou, a mountain village in western Crete (Photograph: Patrick Comerford)


Scripture quotations are from the New Revised Standard Version Bible: Anglicised Edition copyright © 1989, 1995, National Council of the Churches of Christ in the United States of America. Used by permission. All rights reserved worldwide. http://nrsvbibles.org