Today is the Third Sunday of Advent, known many places as Gaudete Sunday. Later this morning (12 December 2021), I am presiding and preaching at the Parish Eucharist in Castletown Church and preaching at Morning Prayer in Holy Trinity Church, Rathkeale, Co Limerick.

Inside the Church of Spyridon is the most prominent church in the heart of the old town of Corfu (Photograph: Patrick Comerford)

Saint Spyridon, is the patron saint of Corfu, is celebrated in the calendar of the Orthodox Church on 12 December, and the most prominent church in the heart of the old town of Corfu is the Church of Saint Spyridon. The church was built in the 1580s to house the relics of the saint, who, according to legends, has saved the island four times from Ottoman invasions.

Saint Spyridon was born in the year 270 AD in Assia, a village in Cyprus. When he was young, he was a poor and humble shepherd. He later married and had a daughter. After his wife’s death, his daughter entered a convent and he joined a monastery.

The ceiling was originally painted by Panagiotis Doxaras, who worked there in 1727. The works by Doxaras decayed over time, and they were replaced by later by copies painted by Nikolaos Aspiotis. The only remaining trace of Doxaras’s work is the gilded border of the iconography.

As well as protecting Corfu during the Venetian presence, Saint Spyridon is also said to have protected Corfu when it was occupied by the French, Russians, British, Italians and Germans. 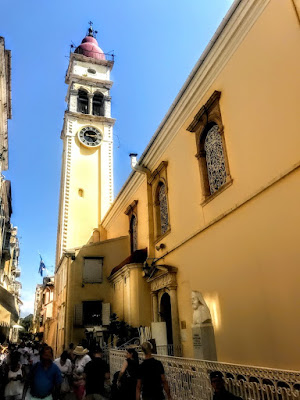 The Church of Saint Spyridon is open every day (Photograph: Patrick Comerford) 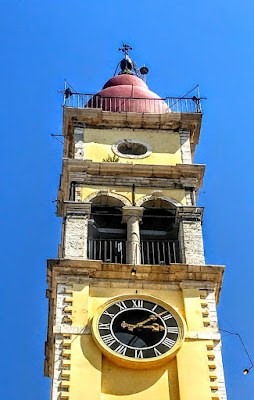 The tower of Saint Spyridon is the tallest church tower on the Ionian islands (Photograph: Patrick Comerford)

The Prayer in the USPG Prayer Diary today (12 December 2021, Third Sunday of Advent) invites us to pray:

Gentle God,
We rejoice in You.
Let us strive for truth, honour,
And all that is praiseworthy.
May we find peace through prayer.

The front of the marble iconostasis in the Church of Saint Spyridon resembles the exterior of the entrance of a baroque-style church (Photograph: Patrick Comerford)