The romantic ruins of
Muckinish Castle in the Burren,
overlooking Galway Bay 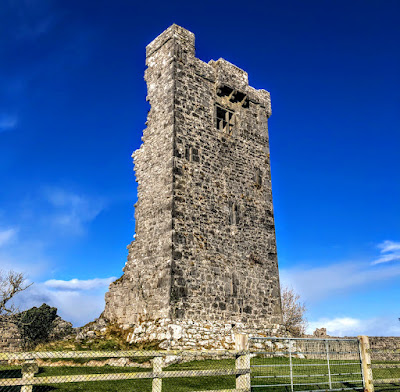 Shanmuckinish Castle, or Muckinish Castle, is a ruined tower house in Drumcreehy, Co Clare, not far from the churchyard with Henry Comerford’s mausoleum (Photograph: Patrick Comerford, 2022)

When I was searching recently for Comerford family houses and graves in Kinvara, Co Galway, and Ballyvaughan, Co Clare, I stopped on the road between both locations to admire the ruins of Shanmuckinish Castle, or Muckinish Castle, a ruined tower house in Drumcreehy parish, Co Clare, not far from the churchyard with Henry Comerford’s mausoleum.

The name Muckinish comes from the Irish meaning ‘pig island,’ but the castle ruins stand in a romantic location halfway between Kinvara and Ballyvaughan, on the narrowest part of a small peninsula on the northern edge of the Burren, looking out onto Galway Bay.

Shanmuckinish was also known for a time as Ballynacragga Castle. It sits on a narrow part of an isthmus jutting into Pouldoody Bay and once had a strategic position. The castle was built by the O’Loughlin family ca 1450. However, the exact date of its original construction is unknown.

The castle is first mentioned in the Annals of the Four Masters in 1584 when Turlough, son of Owny, son of McLoughlin O’Loughlin, owner of the castle, was taken prisoner and later put to death.

Muckinish Castle was inhabited until the 19th century by members of the O’Loghlen, Neylon and Blake families. The castle was repaired around 1836, and it was still habitable in 1897.

Today, the tower house represents the ruins of a square-plan, single-bay, four-storey rubble stone-built tower house, ca 1450. It reaches almost to its original height of around 17 metres and is partially collapsed, exposing a cross-sectional view of the interior floors. The stairways have not survived. 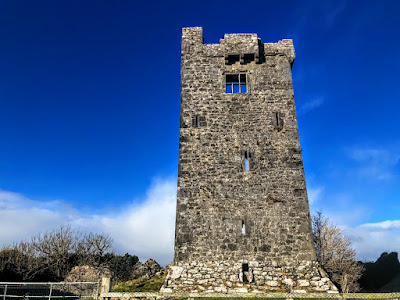 The striking ruins of Muckinish Castle stand off the road between Kinvara and Ballyvaughan (Photograph: Patrick Comerford, 2022)

The striking castle ruins, with their magnificent views over Pouldoody Bay and Galway Bay, stand off the road between Kinvara and Ballyvaughan. From the road, the castle appears intact, but only the south wall is complete. The ruins stand tall over the bay and it is possible to look inside at the ground floor through one of the windows.

Parts of the east and west wall remain, while the coastal north wall has completely fallen into a pile of rubble that prevents exploring the lower floors on that side.

From the shore, it is possible to see partially demolished arches and hanging vaults above the first and third floors. But it is sad to see huge blocks of masonry in the shoreline rubble.

However, the ruin still features the remains of two vaulted ceilings, intra-mural passages and stairs. The lower windows are defensive loops, while the upper floors feature larger decorative windows.

A bawn wall survives and is in relatively good repair due to repair work in the 18th and 19th centuries. The first floor reception room had a large fireplace in the west wall and some of the internal wall rendering can still be seen. The house also has a wall walk and two of the original four machicolations survive.

Below a machicolation that juts out from the parapet is a three-light mullioned window that may have been inserted in the 17th century. All other windows are single narrow slits and may be original work. The parapet on the east wall projects from the wall with corbels, but these features are not repeated on the south or west walls.

It is hard to miss this ruined castle off the coast road between Kinvara and Ballyvaughan. A laneway provides access from the main road, and new holiday homes beside the ruins make it easy to find parking. 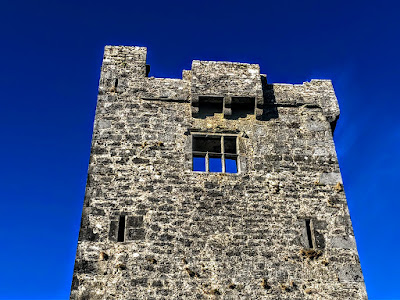 A three-light mullioned window below a machicolation that juts out from the parapet may have been inserted in the 17th century (Photograph: Patrick Comerford, 2022)