Finding a Comerford
family mausoleum in
the Burren in Co Clare 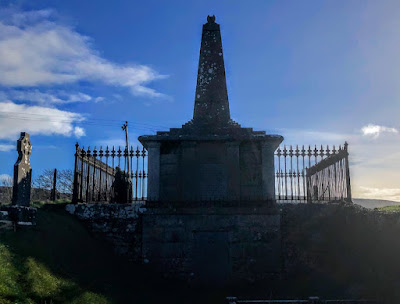 I was searching last weekend for some more Comerford family houses and family graves in Kinvara, Co Galway, and Ballyvaughan, Co Clare, at the weekend.

It was a journey along the south coast of Galway Bay and along the northern edges of the Burren, and it eventually took me to Drumcreehy Church, overlooking the tiny bay and beach at Bishop’s Quarter.

Bishop’s Quarter, about 2 km north-east of Ballyvaughan, once had a religious house belonging, perhaps, to the Bishops of Kilfenora. Today, the most prominent features of the landscape in the area are the ruins of Saint Colman’s Abbey or Drumcreehy Church and an attractive little beach backing onto some sandhills, with a sandy pool almost totally enclosed by sand to the rear of the hills.

The beach, with its tidal lagoon, is said to be a good place for swimming or to collect sea shells, and there is a car park close to the shore. Seaweed is still harvested there and left to dry out of the tide’s reach until it is collected. 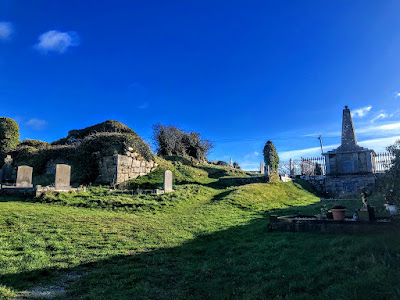 The mausoleum of Henry Comerford (right) and the ruins of Drumcreehy Church (left) at Bishop’s Quarter, near Ballvaughan, Co Clare (Photograph: Patrick Comerford, 2022)

Drumcreehy Church takes its name from ‘Druimcriche,’ the original church built on a hillside in the territory of Crioch Maille. Today, the church is a picturesque but decaying ruin overlooking the Burren and the southern shoreline of Galway Bay.

The church, like many other religious sites in the area, is associated with Saint Colman and is known locally as Saint Colman’s Abbey, but this seems to be a later association.

Some records suggest the church was founded in 1302 by Drumcruth. Other sources point out that the windows and some aspects of the building may date from the 11th century and may have been integrated into the later design.

The north door, which reflects the style of west doors of the nearby Quin Friary, and the chancel may have only been added in the 15th or 16th century. What we see today, however, is a rubble stone-built, single-cell church that may have been built ca 1500.

Most of the church and its details are now destroyed. It appears the church was already in a very poor state by the 1839 when the ordnance survey letters of John O’ Donovan and Eugene Curry describe the church as ‘five centuries old and in a state of dilapidation.’ 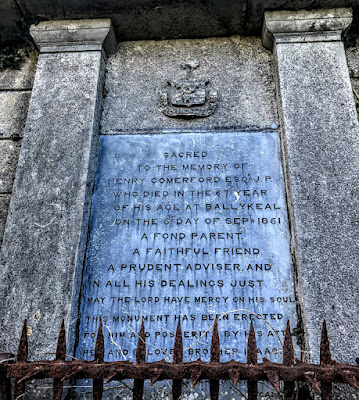 However, burials continued to take place in the surrounding churchyard. The most conspicuous tomb is the mausoleum of Henry Comerford (1796-1861), JP, of Merchant’s Road, Galway, and Ballykeel House, Kilfenora, Co Clare.

Henry died at Ballykeel House on 6 September 1861, and was buried in Bishop’s Quarters Cemetery, Ballyvaughan, Co Clare, with his wife Margaret (McDonagh) Comerford, who died ten years earlier in Salthill, Galway, on 31 August 1851.

Henry Comerford was a prosperous merchant, landowner and magistrate in Galway, but his actions during and after the famine led to infamy.

Henry was the owner of the famine migration ship, St John that sailed from Galway to the US but was wrecked off the coast of Massachusetts on 7 October 1849, leading to 100 deaths.

This was only the beginning of his misfortunes. During the decade immediately after the Famine, emigration continued and economic distress intensified. The migration of tenants and the social upheavalbrought about by the Famine was compounded in the decade that followed by the change of landlords. In 1857, Henry Comerford bought the estates around Kinvara that belonged to the Sir William Gregory, MP for Galway and husband of Isabella Augusta Gregory, better known as Lady Gregory, a key figure in the Irish literary revival and co-founder of the Abbey Theatre.

Henry obtained a bank loan to buy the Gregory estates in Kinvara on the basis of his plans to increase revenue from the lands by raising the rents. Sir William Gregory had a relatively good relationship with his tenants, but Henry set out to double and triple the rents of an already disparate and dwindling community.

In his History and Antiquities of the Diocese of Kilmacduagh, Monsignor Jerome Fahy says after Henry Comerford bought the Kinvara estate, ‘the comparatively short interval of about twenty years witnessed the ruin of over a thousand homesteads in one Parish’.

Another priest, Father Francis Arthur, wrote, ‘The change of landlords for the greatest portion of this place has rendered this one of the most wretched and deplorable parishes in Ireland’. He added that it was impossible to get credit from the merchants of Kinvara as they were ‘bereft of all hope’ after Comerford tried to raise the rents so steeply.

Henry Comerford died at Ballykeel House, Kilfenora, Co Clare, on 6 September 1861. He is buried in the churchyard at Drumcreehy, overlooking Bishop’s Quarter and Galway Bay on one side, and looking across the landscape of the Burren on the other side. It is a monumental statement of his sense of importance in the Kinvara and Ballyvaughan area. 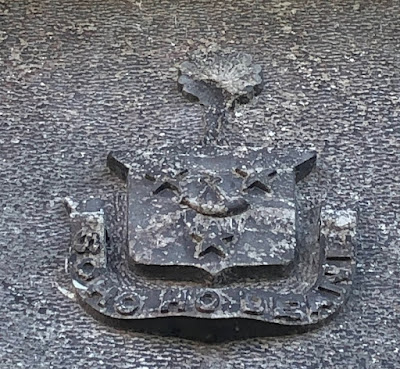 The Comerford coat-of-arms carved on the mausoleum of Henry Comerford in Drumcreehy Churchyard (Photograph: Patrick Comerford, 2022)

The Comerford Mausoleum is a single-bay two-storey cut-stone mausoleum, erected ca 1865, with a rusticated underground burial chamber, channelled walls with pilasters above, surmounted by a cut-stone obelisk with a ball finial and surrounded by cast-iron railings.

The inscription reads: ‘Sacred to the memory of Henry Comerford Esqr J.P. who died in the 67[th] year of his age at Ballykeal on the 6th day of Sept[ember] 1861. A fond parent. A faithful friend. A prudent adviser. And in all his dealings just. May the Lord have mercy on his soul. This monument has been erected for him and posterity by his attached and beloved brother Isaac.’

The carved coat-of-arms above the inscription and below the obelisk represents the coat-of-arms of the Comerford family of Co Kilkenny and Co Wexford, blazoned, ‘Azure, a bugle horn argent, stringed gules, between three mullets or. Crest, A peacock in its pride proper. Motto, So Ho Ho Dea Ne.’ 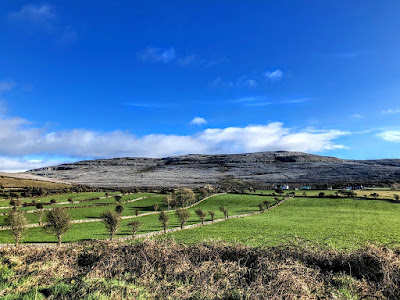 Henry Comerford’s grandson, Francis O’Donnellan Blake Forster (1853-1912), and his family, are buried in the lower part of the mausoleum. The plaque at the lower level is inscribed:

Marcella Blake-Forster was related to the MacNamara family of Ennistymon, and there lies a link with the poet Dylan Thomas. But that’s a story for another day, as is the story of the Comyn family, who are also related to this branch of the Comerford family and who are buried at Drumcreehy Church too. 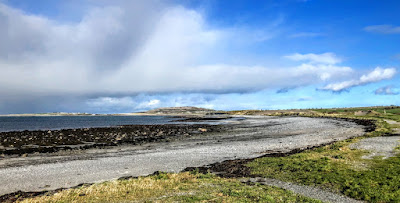